ALL STAR RECOMMENDS FOR JANUARY 5TH 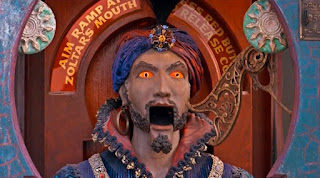 I hope this finds you well, shaking off that last fug of holiday hangover and staring into the bright lights of 2016. Maybe you’re still on a break or perhaps, like me, recovering from the early-January binge of Japanese wrestling and MMA that always chokes out the early days of the calendar. If you have no idea what I’m talking about, the New Year in Japan is fight time, with NYE and January 4 ear-marked annually for combat of both the real and the pre-determined varieties. I’m probably watching Wrestle Kingdom 10 (The J-Wrestlemania) as this column goes up, a card top-loaded with three not to be missed matches for rassle dorks. In addition, a two-day MMA event by a new promotion called Rizin debuted, capped off with an NYE show featuring updated old-school freak fights like this, which is possibly the closest we’ll ever get to seeing She-Hulk vs Titania in real life, and the unfortunate destruction of kickboxer and cosplay aficionado Yuichiro Nagashima. Seriously, how can you not love this guy? Check out the tale of the tape for his fight: 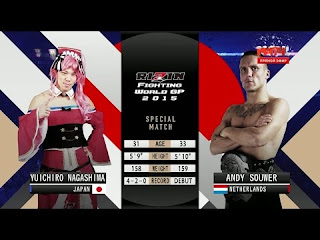 Before we look back at the best of comics 2015 next week, let’s first keep the blazing New Year optimism going as I pull out my own personal Eye of Agamotto, peer into the year ahead and pull out (in no particular order) upcoming highlights of some pretty amazing looking comic books soon to come. I don’t know about you, but I’m pretty excited. Alas, it’s another skip week for the Heavy Metal recaps this week as I’m knee deep in books published as recently as last week for the Best of Column and, sadly, I have no time to type up my notes on comics from the seventies. There will be catch up, however, as the magazine shifted focus fairly significantly in 1979.

Right, get your shopping lists ready.

THE MOEBIUS LIBRARY (Dark Horse, no release date):
Yes, once more I get to praise the comics gods for untangling the murky rights surrounding the vast and incomparable body of work of the late, great Moebius. If I had to guess, this will be formatted much like Dark Horse’s Milo Manara Library: pricy but lovely books. Just order them already. 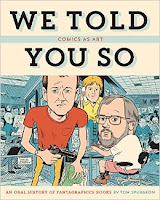 WE TOLD YOU SO: COMICS AS ART (AN ORAL HISTORY OF FANTAGRAPHICS) (Fantagraphics, July): Yes, Fantagraphics still has not fulfilled the $100 Kickstarter reward that’s outstanding to yours truly, but I still love them. Pieced together by former editor and current The Comics Reporter honcho, Tom Spurgeon, this book chronicles the rise of this, the greatest of the indies, Fantagraphics. Rather self-congratulatory, to be sure, but promising a “warts and all” look inside the company, it’s a book sure to be filled with plenty of self-deprecation to accompany and offset the triumph. 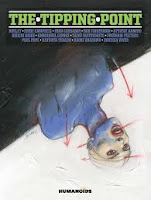 TIPPING POINT (Humanoids, January):
I’ve already raved about this project, an anthology I believe to have pound for pound the best creative line-up of any anthology ever. That does not automatically translate into a classic book, but with Eddie Campbell, Frederik Peeters, Naoki Urasawa, Atsushi Kaneko, Paul Pope, Taiyo Matsumoto, John Cassaday, Keiichi Koike, Bob Fingerman, Emmanuel Lepage, Boulet, Katsuya Terada, Bastien Vives and Enki Bilal involved, I don’t see this being a flop.

THE COMPLETE WIMMEN’S COMIX (Fantagraphics, March):
Two slipcased, hardcover volumes lovingly represent Wimmen’s Comix in its entirety. The legendary underground commix classic anthology features work by Trina Robbins, Phoebe Gloeckner, Melinda Gebbie, Mary Fleener and many more, created over a period of two decades. An important and biting work, this sure to be gorgeous edition may well end up being 2016s most appreciated archival effort. 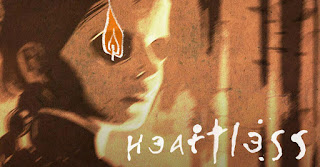 HEARTLESS (Image, no release date):
Warren Ellis and Tula Lotay reunite for a spooky series about an English musician reliving past events from her life. Or something like that. The creators are being fairly mysterious about the book – likely because it was announced so far in advance of debut – but Lotay’s atmospheric, gorgeous art matched once more with Ellis’ acerbic wit and all-round veteran storytelling chops make this a can’t-miss prospect.

GOTHAM CENTRAL OMNIBUS (DC, May):
Once upon a time, Greg Rucka and Ed Brubaker along with artist Michael Lark, made a comic together. It wasn’t just not just any old comic either, but a procedural set in Gotham City where cops struggled to solve cases in the shadow of the world’s greatest crime-solving vigilante. Finally collected in totality in a single volume, this is the book for those, like me, currently soured on the Bat-product and those looking for something a little different from their super-hero books. This is a Bat Book, make no mistake, but grounded in the real lives of those working the beat, it’s like Ed McBain writing in the DCU. Top notch stuff – probably one of the best Gotham books ever. 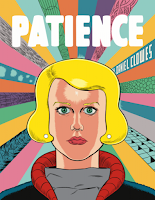 PATIENCE (Fantagraphics, March):
Daniel Clowes is back! A 180 page brand new graphic novel, Patience promises typical Clowes uneasiness, this time married with time travel and “psychedelic psychological horror” (according to an advance Playboy review), making this a no-brainer for your pre-ordering joy.

I AM A HERO (Dark Horse, April):
I’ve raved about this one before as a can’t-miss for horror fans but let me reiterate: Kenzo Hanazawa’s I Am a Hero is a can’t-miss for horror fans, an epic that brings the zombie apocalypse to Japan. Fond of pacing sequences over double-page spreads that move like animation if you speed read your manga like the Japanese so often do, I Am a Hero is the skilful and freaky zombie story of an “unhinged” manga artist, his highly illegal shotgun and some of the creepiest zombies to grace the comics page. Published in English in huge omnibus editions by Dark Horse, April can’t come soon enough. The build is slow, but trust me…just trust me *smirks evilly*. 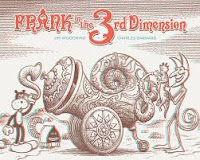 FRANK IN THE 3RD DIMENSION (Fantagraphics, February):
Will this finally come out in 2016? Let’s hope so. A long-promised endeavour, Jim Woodring’s Frank In the 3rd Dimension promises to scour the dreamy depths of your subconscious. Armed with “the most artistically-crafted” 3D layering ever, I’m both excited and queasily nervous about the mind-popping potentiality of this book. 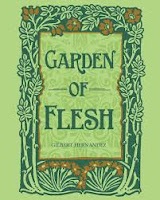 GARDEN OF FLESH (Fantagraphics, July):
Gilbert Hernandez’s “sexually explicit” retelling of The Bible, from Adam and Eve to Noah’s Ark, is a tantalising prospect. Creator of some of the most energetic, enthusiastic sex in comics, Gilbert’s possibly blasphemous effort will no doubt humanise his mythic cast in far greater fashion than your old Sunday school lessons. Hernandez looks to remain as prolific as ever in 2016, with Girl Crazy from Dark Horse, the second volume of Maria M and new Love and Rockets: New Stories also on the way, but Garden of Flesh seems poised to be a unique standout in his massive body of work.

MARY WEPT OVER THE FEET OF JESUS (D&Q, April):
But wait! The sexy theological interpretations continue with Chester Brown’s latest work, an examination of prostitution in the bible that beats Beto Hernandez to the publication punch by three short months. I’m a big fan of Chester’s work and this will likely create more prudish furore than any other comic this year as the author logically and with great care “reassesses the Christian moral code.” Can’t wait.

MASTER OF KUNG FU OMNIBUS EDITIONS (Marvel, June):
It’s here! It’s finally here! The holy grail of uncollected US mainstream comics glory, Master of Kung Fu gets to surrender that particular title as it gets ready to sit on shelves everywhere in a series of four big omnibus editions. A highlight of 1970s Marvel, a decade stacked with classics, MOKF is regarded by many, to this day, as being one of the greatest comics ever. Give it some time as there are some initial teething problems, but once writer Doug Moench and artist Paul Gulacy (and later Gene Day) get going, you are in for a treat, brothers and sisters of the four-colour form. Bust out those nunchucks in anticipation…

TETRIS: THE GAMES PEOPLE PLAY (First Second, October):
Box Brown follows up his amazing biography of Andre The Giant with the biography of a game, Tetris, and those who put it together. There’s still not a lot of information floating around about this, but any Brown is good Brown (so to speak) and I’m curious to see, from a page layout standpoint alone, just what the author has up his sleeve. This one’s going to be a crowd-pleaser and a potential crossover hit.

WONDER WOMAN: EARTH ONE (DC, February):
Grant Morrison and Yanick Paquette’s spiced-up Wonder Woman origin arrives after a period of significant gestation. Paying homage to WW creator, William Moulton Marston, Wonder Woman: Earth One promises a return to the kinkiness of early Wonder Woman married to the powerful feminism one expects in a 2016 story featuring the most famous of super heroines.

GIGANTO MAXIA (Dark Horse, February):
From Kentaro Miura, the creator of the beloved Berserk, comes Giganto Maxia, a manga set in a ruined earth and featuring a gladiator, a mystic and a titan on a quest. Expect lovingly-crafted action and monsters ahoy and a rollicking good read. 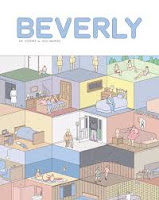 BEVERLY (D&Q, January):
I love a good skewering of suburban existence and that’s what Nick Drnaso promises with Beverly, a graphic novel of interconnected shorts compared already to Dan Clowes and Junot Diaz in style. With layout recalling Chris Ware’s multi-panelled pages, Drnaso’swork is simple and striking. A debut to watch. 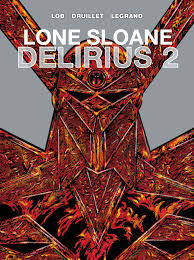 LONE SLOANE: DELIRIUS 2 (Titan, June):
It wouldn’t be one of these columns without a Druillet plug, so here you go. More Lone Sloane madness from Philippe Druillet finally back in print thanks to Titan, whose oversized hardcover editions of this material are tremendous facsimiles of the original French albums of the 60s-70s. Expect mind-bending spreads of space, entropy, existentialism and violence that are at once intricate but basic, beautiful but ugly. 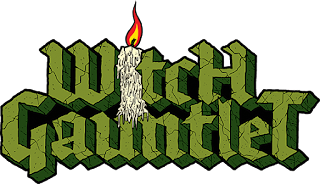 WEBCOMIC OF THE WEEK : WITCH GAUNTLET
By Ze Burnay

Young Melvin loves smoking and heavy metal and as such is considered a bit of a burn out even at 14 years of age. Living with his Aunt Betty, Melvin awakens from nightmare with the instruction to “follow the light.” Spotting a light on a nearby hill, Melvin does indeed follow it all the way through a spooky forested area to a dilapidated old house. Inside is a demonic shrine which, naturally, Melvin thinks is pretty cool. Stumbling upon a coven of evil witches, Melvin finds himself drawn into a conflict bigger than he can comprehend. Armed with the mystical gauntlet of Longbeard, Melvin must take an active role in an ancient supernatural war.

A heavy metal hero’s journey, Ze Burnay’s Witch Gauntlet seems destined for an eventual print collection and with its assortment of demonic wolves, black metal baddies, goofy Lovecraftianisms, cursing and blood, is a fine way to spend a few minutes every week waiting for Burnay to upload new pages.

Treated with the kind of lavish respect that “David Bowie Is” received, this incredible exhibition showcasing Crepax’s Valentina comics (and numerous adaptations into other media) proves, once again, that when it comes to treating our beloved artform with the seriousness of high art, those Euros have the rest of us beat.

Take a virtual tour through this amazing exhibition in preparation for The Complete Crepax.

Cameron Ashley spends a lot of time writing comics and other things you’ll likely never read. He’s the chief editor and co-publisher of Crime Factory (www.thecrimefactory.com). You can reach him @cjamesashley on Twitter.
Posted by All Star Comics Team at 12:57 PM