ALL STAR RECOMMENDS FOR APRIL 12TH 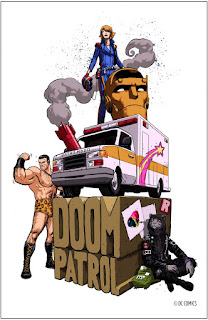 Good evening. Here is the news:


Gerard Way seized his own patch of DC turf, a slew of interesting new Image books were announced (I am thrilled that Tomm Coker is pairing with Jonathan Hickman, that the also massively-underrated John Watkiss is returning to comics and Ronald Wimberly’s Prince of Cats is getting remastered), Lois Lane is maybe Superwoman (wtf?), Black Panther #1 is a hit (phew) and The Moebius Library has been officially revealed.

Quite the week in comics.

Also, All Star is hosting this year’s Ledger Awards April 15th, so get on down there if possible for this celebration of Australia’s finest. Somebody tell Chris Gooch I think he’s a genius. Thanks. 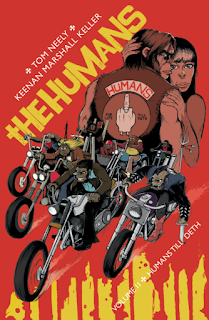 COMIC OF THE WEEK : THE HUMANS VOL.2: HUMANS TILL DETH
By Tom Neely & Keenan Marshall Keller
Published By Image

Holy balls, that escalated quickly. Closing out its initial run with the kind of accelerating craziness you see too infrequently in these days of methodical, episodic comics, Neely and Keller’s The Humans goes out in a blaze of glory, in “Humans Till Deth.” Fans need not weep – there is more on the way as the book relaunches with a new series and a new number one sometime this year, but for now this is it for Johnny, Bobby, Karns, Marra and the rest of this simian motorcycle gang, and not all of them will make it out of this trade paperback alive.

Drug runs, strip clubs, romance, betrayal, sex, drugs and oh so much violence – it’s all here in volume two, with ‘Nam vet Johnny reunited with his long-lost lover Peg, but drawn into a mission of apocalyptic vengeance against his enemies. The feud with rival gang The Skabbs culminates chaotically and all plot threads are tied together with surprising neatness by the end of Keller’s scripts, even more proof that this series was not just an Underground Comix-fuelled punk-fest, it was a carefully constructed piece of dirty comics mayhem.

Neely’s cartooning remains as perfect as ever for a series where monkeys and apes are our overlords– his exaggerated ape facial expression only rivalled by his bike chases and his costuming choices. Some of these pages are really dense, with multiple characters bantering back and forth over up to twelve panels, but Neely handles them with as much care (if with much less detail) as his splashes and impressive double-pagers. The fight scenes are bloody and frequently hilarious (one headshot chimp’s skull explodes into the word “brains”) and the throwaway gags (the Doctor Zaius memorial in particular) also remain perfectly placed. Special mention also to Kristina Collantes who not only provides aesthetically perfect colours for the series but also a mind-blowing pin-up in the supplemental material. I hope we see more of her hyper-detailed, psychedelic artwork shortly.

So smoke ‘em if you got ‘em and pour one out for the departed because this is one series that lived fast, died young and left a number of very hairy corpses. Yep, The Humans is dead (for now). Long live The Humans. If you read volume one, go grab this conclusion now. If you haven’t read The Humans at all, grab ‘em both and burn straight through this love letter to exploitation flicks, underground comics of old and, of course, those damn, dirty apes. 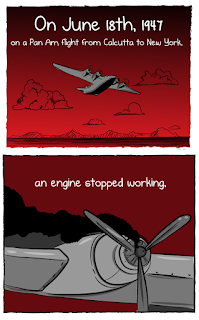 WEBCOMIC OF THE WEEK : IT’S GOING TO BE OKAY
By Matthew Inman

This is the third time, from memory, I’ve featured Matthew Inman’s The Oatmeal site here, but when he keeps uploading such quality content, I think the frequency is more than justified.

“It’s Going To Be Okay” is a beautiful and touching little piece concerning a real life plane crash in June 1947, the results of which arguably changed pop culture forever. It’s also about much more than that, however. I’ll shut up and let you read it now. 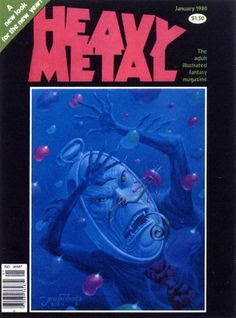 The penultimate instalment! Next week we conclude this segment of the column, as the Grant Morrison era begins April 27th. If you haven’t seen a preview of what’s in store for that, here you go. Should be worth it for the Morrison/Marra collaboration alone.

Anyway, we’re not gone yet, so let’s celebrate the arrival of 1980 with a “new look for the New Year!” Yes, that’s the cover copy, placed right above the image of some clock-faced demon being pelted with celestial jellybeans that was actually painted by Don Ivan Punchantz in 1978. There’s a sentence I never thought I’d write.

By “new look” the team basically means “old look but with actual columns and thus less comics to make us seem even more like Playboy for those struggling with acid flashbacks.” The inclusion of the three ongoing columns is a curious development. I suspect it was likely a necessity due to the cutback in Euro material in the pages and the generally subpar standard of US submissions (if you recall, editorial was bemoaning the state of their slush pile a year back). One of these columns, a music feature, is by future Vertigo editor, the late, great Lou Stathis and should prove interesting reading especially with the benefit of hindsight (he wisely begins with Brian Eno) and Joe Kinney’s column on underground comix should at least be a helpful primer.There are actually a bunch of comics here too, and from some real name-names too: Corben, Veitch, Mayerik, Suydam, Kirchner and more, so let’s get to it.

Richard Corben’s classic “Rowlf” concludes (sniff) and if you thought our dog-man driving a tank last issue was the zenith of comics (as I did) then just wait until you see him storm the demon kingdom and start shooting his enemies with a ray gun! Rowlf rescues his comely, Corbenesque (that really should be a legit adjective) mistress from her captors, zapping demons like a furry Flash Gordon, before driving her home in his commandeered tank, enemies slaughtered. Comics Forever!

Val Mayerik’s “The Pause That Refreshes” brings Kung Fu to HM finally (a couple of years too late, let’s be honest) and also brings back the penis, which I’m sure we’ve all missed. A guy sparring gets bopped on the head a little too hard and transported to a strange land of (I’m assuming here) other unconscious/sleeping people where he gets really mad a party, yells a bit, then hooks up with a slightly older lady to engage in some outdoor…err…activity. At the moment of deliberately hilarious climax, our tough guy is transported back to his dojo, refreshed, thankful he took up Kung Fu and is completely unfazed by his likely severe brain trauma. Mayerik’s art is lovely in its scratchy graphite tones, this lively and dynamic work helping his randy little number immensely.

Terrance Lindall’s frankly ballsy attempt to adapt John Milton’s epic Paradise Lost begins and…look, there’s just no way he sees this project through. It’s a stunning five-page opener, however, as the war in heaven and subsequent descent into hell resembles a bunch of unused Slayer album covers in their painterly detail. I mean, check this out: 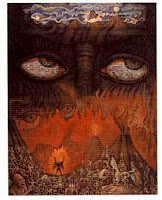 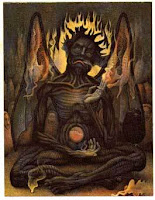 Con table-hog Arthur Suydam returns once again with more lovely Vess-esque art in “Food For The Children.” An EC shocker matched with full colour painted artwork, “…Children” features a hunter who must leave his cabin and brave a harsh, snowy climate to find food for his family. As a large, bug-like monstrosity stalks him, Suydam rather deftly reveals that the narration does not in fact belong to the human hunter, but to the monster – hunter himself trying to feed his own litter of kids. Gorgeous stuff, so gorgeous it again almost makes me want to forgive him for stealing all that table space at cons across the States…

Rick Veitch is back, presenting his first ever “proper” story for HM, “Alien Comix”. Veitch is a particular hero of mine. As a burgeoning wannabe psychonaut, his Swamp Thing meant the world to me and his name does not get thrown around with nearly enough weight anytime anybody brings up the genuine classic forefathers of the unfortunate “Grim ‘N Gritty” movement of the late ‘80s and ‘90s as his Brat Pack and Maximortal are brilliant examples of the postmodern superhero. In any case, here Veitch is working in lovely black and white with an alien soldier in an arid desert landscape being shot at. He returns fire, finding that his enemy is some sort of probe. He disintegrates as he moves ever closer towards it and we pull ever outward, revealing that the probe is controlled by other aliens, that the landscape is a patch of land in the middle of a huge metropolis on a massive planet. Oh, and everyone is speaking in fragmented, cut-up bit of barcode. The indies and underground being swamped and destroyed by the mainstream? Perhaps. I like to think that’s what’s going on here anyway.

A more perfect slice of Heavy Metal to end on this issue I could not imagine. When HM is good, it’s great and it’s going to be strange not to ramble on about it every week. But, best to go out on a high I guess, as when HM is bad…it’s the drizzling shits.

I’ve been reading Spectacular Optical’s excellent book Satanic Panic: Pop-Cultural Paranoia in the 1980s and was reminded of the work of religious comics maker Jack T. Chick, whose little tract comics attempt to steer us all away from dark, evil influences and into the righteous light of the Lord. Here’s a little video exploring two of Chick’s more potent comics, “Dark Dungeons” about the dangers of role playing games, which are in fact “Intense Occult Training” and “Angels,” which reminds us that Rock and Roll is never, ever okay. It is, as we all well know, voodoo. This may seem pretty absurd to you youngsters out there, but Satanic Panic was a very real and far reaching thing. My own Grandfather once refused to let me purchase a comic as he believed it was Satanic. The comic in question: X-Men: Heroes For Hope. Yep, the one where proceeds were donated to famine relief in Africa…

Cameron Ashley spends a lot of time writing comics and other things you’ll likely never read. He’s the chief editor and co-publisher of Crime Factory (www.thecrimefactory.com). You can reach him @cjamesashley on Twitter.
Posted by All Star Comics Team at 5:56 PM