ALL STAR RECOMMENDS FOR OCTOBER 18TH 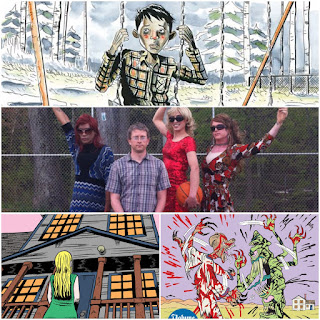 Time has been the enemy of the last week. Thus, here it is - possibly the shortest edition in the history of this column. 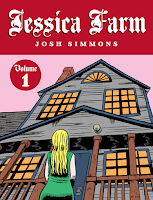 COMIC OF THE WEEK : JESSICA FARM Vols 1&2
By Josh Simmons
Published By Fantagraphics

One of the medium's more uniquely epic endeavours, cartoonist Josh Simmons' "life-spanning" work, Jessica Farm also provides the opportunity for readers to experience the comes equivalent of a time lapse film, with seven years of artistic development crammed into each 96 page volume. Simmons, of House, Black River and The Furry Trap fame (and called by Vice "perhaps the best horror" creator in comics), has produced a single page of Jessica Farm every single month since January 2000 and he doesn't plan on stopping until untimely death or the year 2050, whichever comes first. Collected and published every seven years by Fantagraphics, the second volume (with material created 2008-2015) appeared earlier this year. 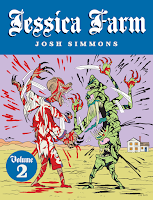 Filled with the cartoonist's trademark sense of unease and disquiet as well as a pitch black streak of humour, Jessica Farm is the adventures of the titular heroine who lives in a sprawling farmhouse filled with both fantastical creatures and monsters - with the nastiest of the latter possibly being her very own father. The debut volume, capturing the years 2000-2007, is a strange experience - Simmons' art evolves at a rapid rate, virtually by the page for the first half of the collection - and sees Jessica mainly working her way through the house and encountering its inhabitants, friends and foes alike. Talking monkeys, miniature men playing lounge music, an impotent hero figure named "The Captain," thunder clouds with human faces and the delightfully named "primo warrior" Mr Sugarcock, all populate Jessica's surreal world. It's at the tail end of volume one that things narratively come together somewhat, with Jessica and Mr. Sugarcock sent off on a mission to find the mysterious Smiths who, hopefully, will help fend off evil forces amassing on the farm.

The second volume is largely a long and hilarious battle sequence, as Jessica and Mr Sugarcock team with the marsupial-like Smiths to battle an army of Skrats, essentially Boogeymen, in a superb pisstake of epic Game of Thrones style battles that has almost as much gore and viscera as a chapter of Johnny Ryan's deranged Prison Pit. Surprisingly, however, there's also a scene of genuine tenderness here, rare for a Josh Simmons comic and made even more notable for just how well it's executed, proving that Simmons is capable of far more than just weird horror and underground comix mayhem -- he's an extremely talented creator.

It's Simmons' artistic journey that may well prove the most fascinating thing about Jessica Farm, however. How much more will Simmons' style grow and just what will Jessica look like when, in 2050, this massive project is finally concluded? Hopefully we're all here to find out.

WEBCOMIC OF THE WEEK : ONE MORE LENS THROUGH WHICH TO PROCESS THE WORLD: A HORROR-FILLED CONVERSATION WITH JOSH SIMMONS

As we near Halloween, your thoughts may to turning to more horrific comics fare, and Simmons, aside from being one of the genre's foremost explorers in comics is also one of the more thoughtful:

"A great thing about a lot of Poe’s stuff is that it is like the best horror, like a lot of horror movies from the 1970s, this sort of formless fever dream that doesn’t quite make sense or work in a conventional sense, but works entirely on its own terms."

That right there is the perfect summation of Simmons' own work - steeped in its own grim but dreamy atmospherics, making sense entirely within the context of its own strange world(s).

Well, now. This one seems poised to break some hearts. Gord Downie, singer for the legendary Canadian band, The Tragically Hip and Jeff Lemire have teamed to produce The Secret Path, the story of a young native Canadian's struggle to return home to his family after being taken by the government and forced to learn how to be a part of "White Canada." It's a story that might sound rather familiar to us Australians...

In any event, Downie has produced a concept album, Lemire an accompanying 88 page graphic novel and both are poised for release. Here is the first taste of the project, the opening track "The Stranger," complete with a lovely video, which animates Lemire's stark, scratchy lines and hazy watercolours. Fascinating stuff.

Cameron Ashley spends a lot of time writing comics and other things you'll likely never read. He's the chief editor and co-publisher of Crime Factory (www.thecrimefactory.com). You can reach him @cjamesashley on Twitter.
Posted by All Star Comics Team at 3:24 PM