ALL STAR RECOMMENDS FOR FEBRUARY 21ST 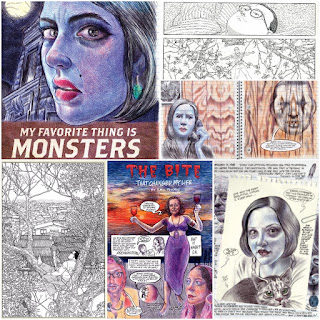 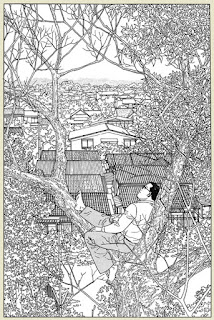 I had literally just emailed off last week's column when I found out that Jiro Taniguchi had died. Taniguchi was yet another manga artist underappreciated by western publishers, with the vast bulk of his body of work still untranslated and the smattering of English books printed in scant supply. Taniguchi was adept at action and suspense (The Ice Wanderer and Other Stories for example), but if you can find it, I recommend hunting down his beautiful The Walking Man, published by Ponent Mon in 2014, a virtually plotless series of tales featuring a character who just simply likes going for walks. It is, hands down, the single most relaxing and therapeutic comic you will ever read - making even last year's chill-fest, Tom Gauld's Mooncop, look like the next Star Wars film in comparison. Taniguchi's work was never nothing less than beautiful and his intricate detail is on full display in The Walking Man, his entreaty for us all to just slow down, take in the day, take in our surroundings, step outside ourselves and remember that we are a part of something far more beautifully huge than the trappings of our own minds and bodies. 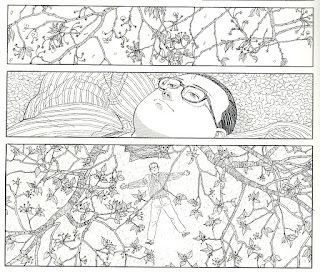 The Walking Man, for me anyway, not only functions as a clarion call for Japanese society to remain connected with the beautiful natural surrounding they've been blessed with, but also as something of anti-manga, a rebellion against the speed readers who plough through page after page of Shonen Jump on the train without pause, and a deliberate attempt to expunge not just motion (most ubiquitously found in the form of lazy speed lines) from the page but also conflict and even action. The Walking Man is about taking everything in to the fullest, each moment, savouring it, even the process of reading itself. Every illustrated motion, from the popping open of a can of drink to even every single stride the character makes, appears frozen in time, still, whole, complete and utterly calming. It is actually one of my favourite comics of all time, far cleverer than it appears and at times meditative to the point of inducing near trance. It's the Music For Airports of comics. Rest in the most placid and tranquil of peace, Jiro Taniguchi, it is well earned. 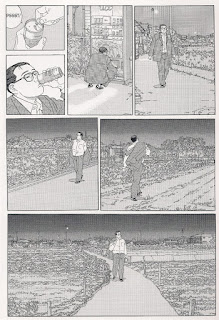 Now from the departure of one master to the arrival of another... 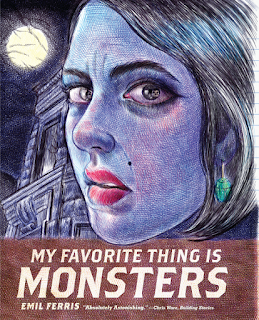 COMIC OF THE WEEK : MY FAVORITE THING IS MONSTERS VOL.1
By Emil Ferris
Published By Fantagraphics

It's Chicago, 1968. A young misfit of a girl named Karen Reyes loves art, but her absolute favourite thing is monsters. Karen identifies with monsters on a deep level, she's able to distinguish between the good monsters and the bad, and the freak-loser-misfit tag she's saddled with socially gives her a degree of empathy for beings such as the Frankenstein Monster that others her age likely do not possess. She desperately wants to be turned into a literal monster, making her outsider status complete and giving her the power and strength she struggles to find day-to-day. She scribbles away in her notebooks, copying the covers to monster magazines of the period, and is taught to draw by her elder brother, Diego "Deeze" Reyes. Deeze is himself something of an outcast with his heavily tattooed skin and constant drinking, yet he easily maintains his status as the local heartthrob. He's an incessant womaniser, stringing along a parade of local women with his handsome features and "bad guy" rebel attitude. The Reyes siblings are raised by a single parent, a mother who is superstitious to the point of obsession, heavily religious, but also deeply loving. They are a weird but obviously tight-knit little family but there is secret, hidden family tragedy waiting to fracture their closeness.

Karen is not shown much kindness in her life outside of her little family. Her best friend (who she deeply loves) has turned her back on her in a quest for popularity and peer acceptance and her bullying is near constant. What little kindness there is comes in the form of her upstairs neighbour, the eccentric Anka Silverberg, a Jewish WWII survivor who nurtures Karen's artistic streak and gives her odd gifts such as balled up pieces of bread. When Anka is brutally murdered, Karen is determined to solve the mystery. She begins keeping the company of Anka's stern, elderly husband, Sam. Drunk and grief-stricken, Sam Silverberg pulls out a cassette tape on which Anka reveals her incredible life story, in which clues to her gruesome death abound.

It's a rare thing to find an artist arriving as fully formed as Emil Ferris. She grew up in what basically amounts to Karen's neighbourhood in the '60s and lived in a diverse and vibrant outsider community (see this week's webcomic below for the sourcing of her biographical information). There is much of Karen in Ferris and this is perhaps why My Favorite Thing Is Monsters feels, much of the time, so painfully real. Ferris had scoliosis and much of her childhood was subsequently spent virtually immobile. Hunchbacked as a result of her condition, Ferris too had a natural affinity for the monsters of film and magazine as well as, obviously, a love of art. Her beautiful, scratchy lines reveal a smorgasbord of influences, yet I'm not sure that there's ever been anything quite like this in comics before and if there has, it surely has not been executed with such unbelievable skill. 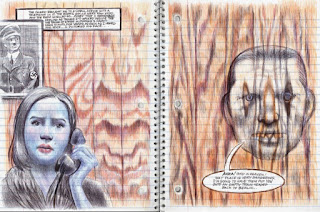 My Favourite Thing Is Monsters is told in the form of Karen's scribbled notebooks. The vast majority of it is drawn in biro, and pretty much the rest of it in fineliner, with the odd excursion into brush, wash and (possibly) colour pencil. Every page looks as though it's come from an A4 lined notepad, complete with red margin line running vertically down the page, evenly spaced blue lines horizontally and even faux hole punch marks and a spiral binding. There's urgency on the pages, but Ferris maintains deep control of her images throughout. Ferris is fond of cross-hatching a fine lattice of multi-coloured biro lines on her characters, creating soft yet striking contours and textures and depths. Karen herself is drawn almost totally throughout as a little werewolf girl, almost like something from Maurice Sendak's Where The Wild Things Are gone mystery-solver, her diminished, devolved image of herself near total even as she wears her "monstrous" outsider status as something of a badge of pride. Anka Silverberg is a bombshell. Consistently the most realistically drawn figure in the book, her piercing eyes frequently have something of the ubiquitous gaze about them, peering out intensely from the page. Anka's story is engrossing, cutting across decades, and it's a testament to Ferris' writing skills just how easily her story flips between coming of age drama to mystery to horror and back again so seamlessly, never losing sight of her characters' humanity and keeping her story firmly on the tracks. 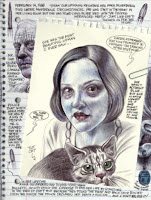 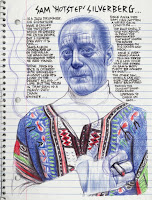 It's worth reinforcing just how good the writing actually is. As an art object alone, My Favorite Thing Is Monsters is a rousing success but coupled with the beauty and frequent poetry of its words, it becomes something really, truly special. It is wonderfully plotted, but also beautifully scripted, each character's voice distinctive and uniquely articulate. The complete package is so compelling I lugged it around with me for three days (it is large and, at 360 pages, it is heavy) until it was finished, the book gathering astonished double-takes from tram commuters sitting opposite along the way, some of whom, I'm sure, assumed I was literally reading some wunderkind's literal exercise book doodles.

Originally slated for release last October (the copies were stuck at sea after the freight company went broke - no, seriously), it's been a long journey for Ferris' epic book. Six years of work went into creating this project and its first massive half reveals itself to be a dense, sprawling slab of innovative, beautiful and restlessly creative comics, rich in character and history and symbol and myth and a multitude of genres, expertly and lovingly put onto the page. 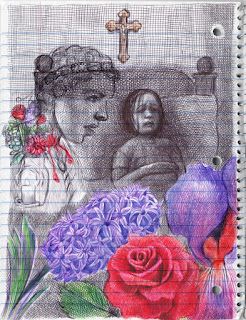 Unfortunately, we have to wait until this Halloween for the concluding half of Emil Ferris' debut project, a length of time that seems cruelly long but maybe just long enough to soak in her pages and really appreciate just want she's somehow accomplished with Volume 1. Even with the buzz and the weight of prolonged expectation, My Favorite Thing Is Monsters is page after page of just shockingly great comics. There is more to unpack here, much more, from Karen's African-American friend and Frankenstein stand-in Franklin, to WWII-era occultism, to the destructive nature of secrets. But all of that is for you to discover. Consider My Favorite Thing Is Monsters essential and indispensible. 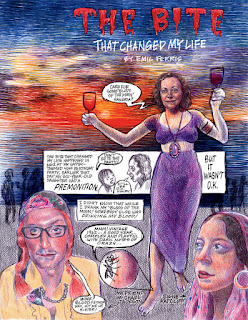 WEBCOMIC OF THE WEEK : THE BITE THAT CHANGED MY LIFE
By Emil Ferris

If you're not sold by now, here is a typically beautiful webcomic Emil Ferris made to both detail the circumstances under which My Favorite Thing Is Monsters was created (spoiler: tough and long) and to promote its long-delayed release. "The Bite That Changed My Life" features the gorgeous biro crosshatched lattices that are sure to be Ferris' trademark and her unique almost mural-like approach to many of her pages. For even more Ferris, check out this lengthy interview with her over at The Comics Journal. It's noted therein that she's somewhat reclusive, so the frankness and openness on display in "The Bite That Changed My Life" is made all the more surprising.
Wonderful stuff.

Settle in, boils and ghouls, for a creepy feature-length classic that My Favorite Thing Is Monsters' protagonist Karen Reyes actually watches towards the tail end of volume one, the 1962 cult classic Carnival of Souls. Quick synopsis for the uninitiated: Mary survives a drag race gone wrong and winds up in a creepy little town with no memory of how she actually survived the deadly accident. Thus begins a series of creepily paranormal incidents and interaction with provincial weirdos, all leading to a spooooooky twist ending. It's a can't miss, basically.

Cameron Ashley spends a lot of time writing comics and other things you'll likely never read. He's the chief editor and co-publisher of Crime Factory (www.thecrimefactory.com). You can reach him @cjamesashley on Twitter.
Posted by All Star Comics Team at 4:32 PM