ALL STAR RECOMMENDS FOR MARCH 14TH 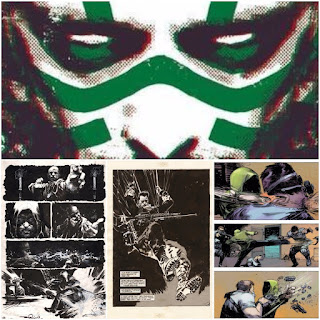 Let's get on with the column, which halfway through turned into me remembering just how much I love the work of Jorge Zaffino and just how nice it is to see it living on in the form of Jorge's son Gerardo. 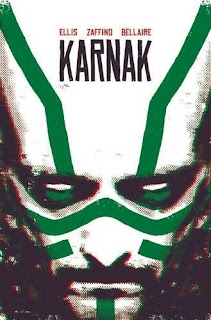 COMIC OF THE WEEK : KARNAK : THE FLAW IN ALL THINGS
By Warren Ellis, Roland Boschi, Gerardo Zaffino and Dan Brown
Published By Marvel

It would appear as though writer Warren Ellis' six-issue stint on Karnak will be his last Marvel work for the foreseeable future. Ellis has popped in and out of The House of Ideas over the years and from online reaction its clear there's some resentment and disappointment over his frequent departures, although a reader can rarely find too much at fault in the comics themselves. In his newsletters, Ellis has mentioned stepping away from comics for a time at the conclusion of his current slate of creator-owned books and his 24-month commitment to relaunching the Wildstorm universe over at DC. If the six issues of Karnak collected in The Flaw In All Things do turn out to be Ellis' Marvel goodbye, it's quite the way to wave farewell. The character of Karnak is admittedly an odd assignment for such a high-profile writer but, as was his job description, Ellis has transformed this odd, obscure little character (one even I'm sure his co-creator, Jack Kirby, could never have imagined would one day star in a solo title) into one of Marvel's most intriguing and dangerous assets.

Karnak Mander-Azur first appeared alongside his fellow Inhuman characters in 1965 in the pages of Fantastic Four #45, roughly a third of the way through Kirby and Lee's seminal creative run. He was a fairly diminutive figure by Kirby standards, slim and egg-headed, and readers first met him bowing before a giant block of marble before shattering it as The Human Torch says, with "one lightning-swift chop!" Karnak has the fascinating ability to find a single weak point in anything and thus smash it to bits, a power largely used in the service of keeping the comic book action moving but in "The Flaw In All Things," Ellis also puts it to cruel use in cases of problem solving and even ego-shattering philosophical debate.

Reading very much like a Marvelised version of Ellis' own creator-owned Injection, "The Flaw In All Things" finds Karnak being recruited by S.H.I.E.L.D to rescue a teenaged boy named Adam Roderick from the clutches of an A.I.M splinter group. Adam is something of a mystery, exposed to the Terrigen mists that give Inhumans their varied powers, he ended up with what seemed to be little more than cured allergies. Of course, there is much more at play here, with Adam holed up in a church built on the bones of dead gods and possessing actual abilities that are oddly beautiful but frightening in scope -- frightening enough to have Karnak contemplating his ultimate existential terror: the potential flaw in himself. 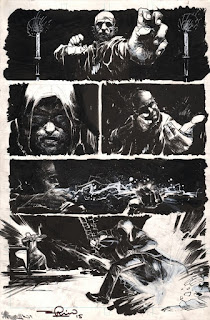 This incarnation of Karnak is first and foremost a philosopher and if you've ever studied any philosophy at all you'll be well aware that philosophy is not always very nice. Neither is Karnak. Karnak has achieved the title of "Magister," inferring a chief philosopher/priest role, and spends much of his time at his Tower of Wisdom, meditating in front of a perfectly cube-shaped rock and teaching numerous unfortunate disciples grimly bleak but utterly logical philosophical lessons about the nature of the universe. It's rare that a mainstream comic can count its philosophical discussions as equally memorable as its fist-fights, but scenes such as Karnak distinguishing a German waitress' conception of mindfulness from the fact that even a truly aware consciousness matters not to the world along with his reminder to his followers that the stones they are made to contemplate, in their lack of perception of anything at all, are perfect and "matter more to the universe" than they do are as equally striking as artist Gerardo Zaffino's kinetic and hyper-violent action sequences. 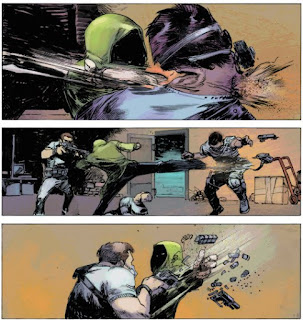 Argentinian artist Gerardo Zaffino is the son of the late and legendary artist Jorge Zaffino (see this week's webcomic), who passed way too young at the age of 43 and whose beautiful and unique inkiness found a home in many a Marvel title of the '80s, from The 'Nam to The Punisher to Conan. There is much of his father's gritty, square-jawed scratchiness in the junior Zaffino's work (the mouths are a particular tell) and it's a terrific shame that personal issues forced him to leave the title before even completing the much delayed second issue. Zaffino does go out swinging however, completing before departure a wordless multi-page sequence where Karnak decimates an entire terrorist cell, finding flaw after flaw in all manner of human flesh and bone mechanics. It is possibly the book's standout visual sequence, recalling somewhat Ellis and his Injection collaborator, Declan Shalvey's work in an issue of their equally brief Moon Knight run. Zaffino's close-ups on his protagonist frequently smiling cruelly are also terrific and, as mentioned, are eerily reminiscent of his father's facial expressions. Gamely stepping in to fill the artistic void was Roland Boschi, an artist I like quite a bit, who takes some time to find his feet but makes the book his by its final issue even as he retains Zaffino's use of tones in an attempt to spackle over any artistic seams.

Unfortunately like all things there are flaws in Ellis and co.'s Karnak, in this case being an overly abrupt ending. It's not a fatal narrative flaw, far from it, but it's there, a faint structural crack for sharp readers to chop away at and, as mentioned, the lack of artistic coherency is also a disappointment. Unlike Karnak himself, however, I'm able to look past these flaws and appreciate all other aspects of this unique little experiment in turning a Marvel D-lister into something far greater than he ever was intended to be. Pretty sure you will too, as ultimately what we are left with is what I honestly wish the Big Two gave us more of: something whole and complete and digestible as a single, attractive comic book package, heightened by typically stunning cover work by David Aja (apart from issue six, which does look quite a bit like a phallus topped with a bulbous, screaming Karnak head. Not sure how that one slipped past). It's imperfect, sure, but Karnak: The Flaw In All Things is thrillingly game in its attempts to be both expansive in scope and tone but contained in narrative. 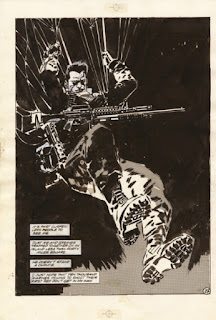 WEBCOMIC OF THE WEEK : PUNISHER BY JORGE ZAFFINO

There is a frustrating and disappointing lack of sequential art by the late, great Jorge Zaffino available to peruse online. Sure, you can pull up numerous gorgeous splash pages and cover art images but even the mighty Bristol Board Tumblr site, from which I regularly pilfer for this space, has bupkiss. I'm a little shocked. After nearly half an hour of searching, I decided that this would be the way to go -- two pages from what I believe belong to the Chuck Dixon-scripted Punisher: Kingdom Gone hardcover from 1990 although I could be wrong about that. It's just two pages, sure, but two impactful, inky and beautiful two pages of what looks like original Zaffino art to remind us all of what a comics powerhouse he actually was.
Enjoy.

Sped up to just one minute thirty seconds, although it looks as though it didn't take much longer to complete in real time, is this video of Karnak artist Gerardo Zaffino picking up his brush and going straight to inks, belting out this Barbarian sketch that would easily stand alongside something his venerable father may have drawn. Gerardo's a ferocious, energetic talent and hopefully he's back with another high profile assignment sooner rather than later.
Enjoy.