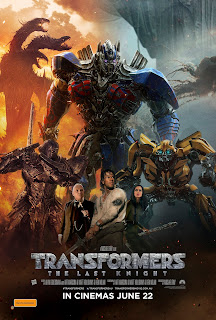 The Last Knight shatters the core myths of the Transformers franchise, and redefines what it means to be a hero. Humans and Transformers are at war, Optimus Prime is gone. The key to saving our future lies buried in the secrets of the past, in the hidden history of Transformers on Earth. Saving our world falls upon the shoulders of an unlikely alliance: Cade Yeager (Mark Wahlberg); Bumblebee; an English Lord (Sir Anthony Hopkins); and an Oxford Professor (Laura Haddock). There comes a moment in everyone’s life when we are called upon to make a difference. In Transformers: The Last Knight, the hunted will become heroes. Heroes will become villains. Only one world will survive: theirs, or ours

Thanks to those masters of disguise at Paramount and TRANSFORMERS: THE LAST KNIGHT JUNE 22, we're giving you the chance to win 1 of 5 Double In-Season Passes to see the film!

To go into the draw for your chance to win all you need to do is tell us,
"Although one shall stand and one shall fall, I would never throw away the opportunity to see the new Transformers with  ______ so recklessly."  filling the blank with the tag of the person you can see yourself transforming and rolling out to this film with and you will be entered in the draw.

Terms and Conditions:
-Only entries made via the comments on the Facebook post will be included in the draw.
-All entries will go into the All Star Barrel and winners will be drawn at random.
-Entries close 6pm Monday the 19th of June and winners will be announced Tuesday the 20th and notified soon after as to how to collect their tickets.