Marvel is fast approaching its new era, the MARVEL LEGACY! The return of fan favourite heroes, original numbering on long running series and utilising the board appeal of new characters and stories of recent years with the love of Marvel rich and vibrant past!

This all starts with Jason Aaron and Esad Ribic's one shot, MARVEL LEGACY #1. Telling the story of the Marvel Universe's original heroes, setting the new status quo in full motion.

Leading up to this, Marvel has being releasing a series of one shots focusing on characters with a rich legacy of their own, called GENERATIONS. Showcasing characters that share the same namesake and how the relationship between the two effects the other. 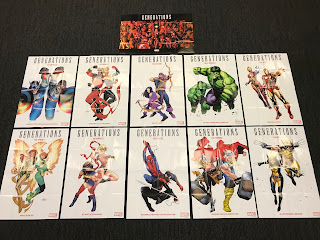 Celebrating the upcoming release of MARVEL LEGACY #1 we are GIVING AWAY the 11 amazing posters Marvel released for each of these Generations titles (valued at over $150) to one lucky customers.

To go into the draw for your chance to win all you need to do is tell us,
"I'll be reading Marvel Comics for Generations to come but I really think _______ would like to see where Marvel's Legacy is headed in the future!" filling the blank with the tag of the person you think should really check out Marvel Legacy #1 and you will be entered in the draw.

As an added bonus, anyone that pre-orders Marvel Legacy #1 will get a second entry in the draw!

Terms and Conditions:
-Only entries made via the comments on the Facebook post will be included in the draw.
-All entries will go into the All Star Barrel and winners will be drawn at random.
-Entries close 6pm Monday the 26th of August and the winner will be announced Wednesday the 27th of September, the day of Marvel Legacy #1's release.

For a little more info on Marvel Legacy #1, just look below.

EVERYTHING STARTS HERE!
It begins at the dawn of the human race, and ends with a child's prayer! In between, empires fall, mysteries brew, secrets are revealed, quests are undertaken and legends are forged! All leading up to the dramatic return you've been waiting for - and one you've been dreading!
Jason Aaron (MIGHTY THOR) and Esad Ribic (SECRET WARS) usher in a new dawn - one whose rays will touch every corner of the Marvel Universe in the days to come!
MARVEL LEGACY: It's everything you've been longing for - and more!
Rated T+
Posted by All Star Comics Team at 4:39 PM