ALL STAR RECOMMENDS FOR SEPTEMBER 19TH 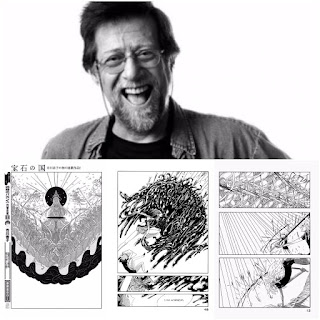 Len Wein co-created many, many characters. Some of them you may of heard of. Mockingbird. Amanda Waller. Lucius Fox. The Human Target. Abby Holland. Madrox The Multiple Man. Colossus. Wolverine. Storm. Swamp Thing. He wrote comics for decades, a feat that is becoming rarer and rarer as time marches on and the industry churns through its workhorse writers (with several exceptions of course). He was, by all accounts, a lovely man. The Kirby 100 instalment of this column had in its video portion a documentary on Jack Kirby that featured Wein, alongside Marv Wolfman, grinning like the little kid he was in tales he recounted of hanging out at Jack's house, eating his food, swimming in his pool, learning at his drawing table. As Kirby was a large block in the road that made up Wein's early life, so Wein was a block in mine. I was a flu-ridden ten year old when my Grandpa brought home a Federal Comics reprint compendium of Wein's Giant Size X-Men #1 and those early first few Chris Claremont-scripted Uncanny X-Men issues that followed and it blew my mind.

These connections to the past, the real foundation of comics as we know it, become hazier and hazier as more and more of these guys pass.

Thanks, Len. Some of my favourite characters are your kids. I dare say anyone reading this will likely say the same. 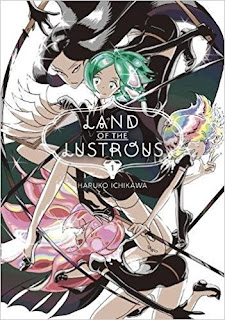 COMIC OF THE WEEK : LAND OF THE LUSTROUS VOLUME 1
By Haruko Ichikawa
Translated by Alethea Nibley and Athena Nibley
Published By Kodansha

There are times when just the sight of a page or two is argument enough that a particular comic is for me. Haruko Ichikawa's bizarre and utterly beautiful Land of The Lustrous is a perfect example. Here are two particular pages I spotted online a couple of months back: 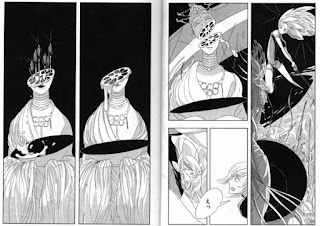 Set in as future where the primary lifeforms are a kind of humanoid, sentient gem-beings called The Lustrous, Ichikawa's weird post-apocalyptic premise gets weirder with the introduction of her antagonists, The Lunarians, moon-dwellers who come to the planet's surface to hunt The Lustrous in order to make decorations of them. Yep, despite looking like avatars of some long lost ancient peace goddess from Indian mythology, The Lunarians would appear to be rampant consumers, plundering the world of it's most precious and gleaming resource.

The Lustrous are quite capable of fighting back against their jewellery-loving foes, however, and Ichikawa's cast is made up entirely and exclusively of young female (or beings who have taken on a female form, if you prefer) members of The Lustrous, each studying to make their way in the world and to find a singular purpose to their existence. The Lustrous' strength is graded on the density of their crystalline forms - the more brittle a Lustrous may be, the less likely she is to be taught to fight and destroy Lunarians.

Enter: Phospophylite (or Phos for short - let's go with that), who wants nothing more than to earnestly make a difference to her world in some important capacity or other. The problem is that she's the most brittle of her kind, excluding her from fighting, and she's also just not very good at pretty much anything deemed to be practical. Her sensei has a solution, however, and tasks Phos with compiling a natural history of their planet to preserve the present and protect against a future of ever-increasing Lunarian attack. And here is what could be your possible theme: environmental education in the form of The Lustrous vs. environmental destruction in the form of Lunarians.

To protect Phos, our fragile gem is partnered with another misfit of Lustrous society, Bort, a gem who secretes a kind of mercurial oil slick poison she can shoot and shape that's destructive and poisonous to her enemies and the environment both. Bort, condemned to live life after dark, wants nothing more than to be captured and taken away by her foes - perhaps sensing that her pollution has more in common with the Lunarian way of life than with her own kind.

I know, the whole thing is kind of ridiculous. But look at this art!

Haruko Ichikawa produces something visually stunning on almost every page, often combined with the facility and technical prowess to move the action all over her page space in clever and playful ways. From the pages that immediately precede the images I opened with, here's a character named Goshen shattering a hailstorm of deadly Lunarian arrows and leaping stage left up and right off panel to attack:

So often in lesser manga, we can criticise artists for using negative space in really lazy ways, using blank spots in panels or during talking head sequences to chew through a grinding page count/deadline schedule in incredibly uninteresting ways. Ichikawa, however, appears determined to use her page space in clever, artful ways at all times. In fact, some of Land of The Lustrous' best sequences are the quiet moments where the artist's uncommon grace and real gift for inking come to the fore with just lovely results: 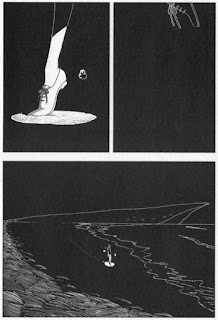 Thinking critically here, there are some problems. Land of The Lustrous may be one of the year's most visually gorgeous debuts, but its large cast of young students all dress and look similarly which can cause some confusion as to who is actually who. Different hairstyles and hair colours largely identify characters, as we see from the book covers and the upcoming anime adaptation (see this week's video), but in a black and white comic this poses a bit of a problem. However, a moment or two of character confusion is a small issue when considering just how beautiful this comic is - even pages featuring a giant slug monster about to swallow Phos whole come off as far more lovely then they do grotesque. 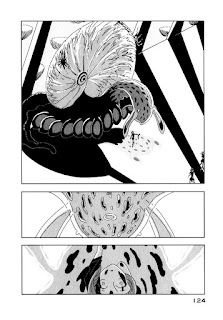 Additionally, I'll take Ichikawa's remarkable black and white pages over a coloured version of this any day. I'll also forgive several overly expositional sequences for similar reasons; this book's sophistication lies not in its scripting but the visual execution of its off-the-wall concept. For a book about gleaming gem-beings, Ichikawa is unafraid to go dark. Stripped of the shortcuts colour would provide, she embraces the "limitations" of ink and grey tones, giving her Lustrous cast moments to really pop off the blackness and shine as much as they are able. 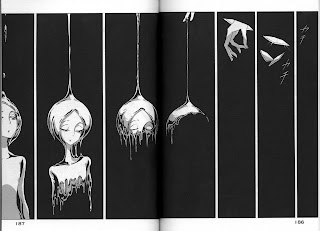 If you really love just tumbling headlong into a page of comics, there's nothing quite like Land of The Lustrous right now, particularly in black and white. Powered by an expansive imagination and some really striking technical artistry, it's one to read and re-read and flip through over and over. My own copy is beginning to show the debilitating effects of re-reading of a much older book in my collection. Running, I believe, only six volumes in total, Land of The Lustrous is also a comparatively bite-sized manga commitment in page count, but not in scope.
Highly recommended. 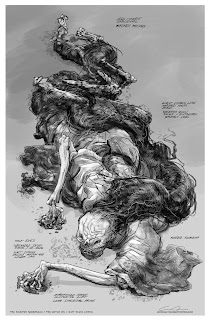 WEBCOMIC OF THE WEEK : THIS CRAZY CONCEPT ART IS FOR A FANTASY SAMURAI MOVIE MADE WITH PUPPETS

Okay, so not a webcomic this week but who cares when there's Guy Davis concept art to share?

The Haunted Swordsman is a crowdfunded attempt at bringing the tale of a lone samurai and his severed-head companion to life using 90cm bunraku puppets. The best part of all this could well be Davis' excellent Japanese-inspired beasties all of which would interact with flesh and blood members of the cast. Let's face it, if there's one thing that could make this world a better place it's Guy Davis monster puppets.

The whole thing looks and sounds pretty incredible so pop on over to Gizmodo for a look.

If you're going to add colour to Land of The Lustrous you might as well go all out. Jettisoning the swaths of both black and white that Haruko Ichikawa employs in her manga is this new anime adaptation set to debut early October.  It's an odd thing to see something simultaneously so recognisable to the source material and yet so foreign. On the plus side, the occasional confusion over which character is which that happens reading the manga appears utterly absent thanks to the gleaming colourful hairstyles of our favourite gem-ladies. The saturated colours also lend Ichikawa's fairly psychedelic concept some extra lysergic pop - this surely has the potential to be a kind of tripper's cult classic in years to come.

The downside is, of course, we lose the grace and poise of Ichikawa's expertly constructed pages and her masterful use of black and white. That, ultimately, is what we have the manga for though, I suppose. Anyway, check this out - it looks like a can't miss.

Cameron Ashley spends a lot of time writing comics and other things you'll likely never read. He's the chief editor and co-publisher of Crime Factory (www.thecrimefactory.com). You can reach him @cjamesashley on Twitter.
Posted by All Star Comics Team at 5:02 PM