VALERIAN AND THE CITY OF A THOUSAND PLANET DVD PRIZE PACK GIVEAWAY! 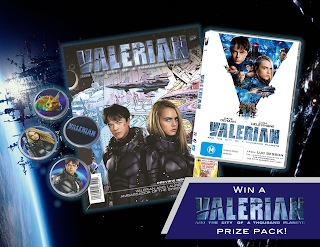 In the 28th century, special operatives Valerian (Dane DeHaan) and Laureline work together to maintain order throughout the human territories. Under assignment from the minister of defense, the duo embarks on a mission to Alpha, an ever-expanding metropolis where diverse species gather to share knowledge and culture. When a dark force threatens the peaceful city, Valerian and Laureline must race against time to identify the menace that also jeopardizes the future of the universe.

Thanks to those far out folks from Entertainment One and VALERIAN AND THE CITY OF A THOUSAND PLANET, NEW TO BUY OR RENT ON BLU-RAY, DVD & DIGITAL now we are giving you the chance to win 1 of 2 DVD Prize Packs containing:
VALERIAN DVD
VALERIAN Comic Book Sampler
VALERIAN Pin Set
100 DAYS WITH VALERIAN book with a signed card from Luc Besson

To go into the draw for your chance to win all you need to do is tell us,
"Space is pretty amazing but the stars in my eye will always be thanks to  _______ " filling the blank with the tag of the person who lights up your night sky and you will be entered in the draw.

Terms and Conditions:
-Only entries made via the comments on the Facebook post will be included in the draw.
-All entries will go into the All Star Barrel and winners will be drawn at random.
-Entries close 5pm Saturday the 2nd of December and winners will be announced Sunday the 3rd and notified soon after as to how to collect their prize packs.

A huge thanks again to Entertainment One and VALERIAN AND THE CITY OF A THOUSAND PLANET, NEW TO BUY OR RENT ON BLU-RAY, DVD & DIGITAL.

Posted by All Star Comics Team at 3:10 PM