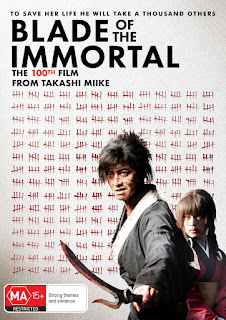 Thanks to those furious fighters from Icon Film and celebrating the release of BLADE OF THE IMMORTAL
out of BluRay, DVD and Digital March 28th, we have 3 Blade Of The Immortal
Samurai Warrior themed DVD packs (valued at $120) to give away!
The packs include:
Blade Of The Immortal,
13 Assassins,
The Battle For Red Cliff,
Hara Kiri: Death Of A Samurai,
Railroad Tigers Word Master.

To go into the draw for your chance to win all you need to do is tell us,
"Being Immortal wouldn't be so bad, as long as I got to spend forever with _______ ."
filling the blank with the tag of the person who you could spend eternity with and you will be entered in the draw.

Terms and Conditions:
-Only entries made via the comments on the Facebook post will be included in the draw.
-All entries will go into the All Star Barrel and winners will be drawn at random.
-Entries close 5pm Sunday the 25th of  March and winners will be announced Monday the 26th and notified soon after as to how to collect their prize pack.

A huge thanks again to Icon Film and BLADE OF THE IMMORTAL
out of BluRay, DVD and Digital March 28th,