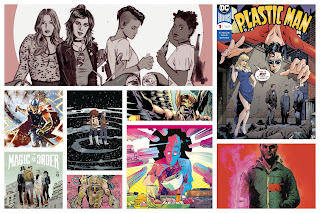 Yes, yes, yes. End the loooong weekend and start the new week right by checking in with this week's new comic list. You won't find a new comic list as detailed as this anywhere else and it's all for you!

Being the number one weather man on Mars was a sweet gig for Nathan Bright, but now he's going to learn how to live without that success in WEATHERMAN #1! Unlike real life cases of people on the TV committing crimes off-camera, this weather man will be hunted by the law, all the while trying to figure out who really committed the atrocity that wiped out nearly all life on Earth! Or did he just forget that he did it all himself?
Don't forget that Mitch is giving a "MONEY BACK GUARANTEE" for all orders placed before Wednesday on this new title, he enjoyed it that much. Are you going to check it out? Ask about details!


There's always been a code of honour among assassins but who will deal with those who lack honour? The ones who don't complete the job? Grab a copy of DEADPOOL ASSASSIN #1 (OF 6) to see how Deadpool tries to deal with this most important of issues and he's bringing Weasel along with him for the ride!
.
At long last, Kamala Khan meets Doreen Green! What does that mean for you? It means that MARVEL RISING ALPHA #1 features the first team-up of Ms. Marvel and the Unbeatable Squirrel Girl of course, and you don't want to miss this historic event!

The mysteries lingering after "Secret Wars" return with MARVEL TWO-IN-ONE ANNUAL #1, and it's up to the Thing and Dr. Doom, the Infamous Iron Man, to investigate! But they soon find the one place Victor von Doom has no power... the Council of Reeds! Can Dr. Doom defeat his greatest enemy, all of him? With Johnny and Ben's life hanging in the balance, we sure hope so!

With his mantle reclaimed, Thor Odinson is ready for a new era to begin with THOR #1 from Jason Aaron. It doesn't take long for a new brand of trouble to start, as Thor must find various Asgardian artifacts that were scattered across the Earth. Plus, learn the stupendous cost required to produce many magical hammers!

The city of Alphatron is under threat from the criminal known as "The Chef", who has united all of the cities criminals into one large organisation! The city needs a hero but it will not get one. Pick up a copy of WEEKND PRESENTS STARBOY #1 to see who they deserve: Starboy from the mind of singer, songwriter Abel "The Weeknd" Tesfaye.
Bet you didn't that one coming!

It's a battle of two of Gotham's finest minds in BATMAN PRELUDE TO THE WEDDING BATGIRL VS RIDDLER #1! Barbara Gordon, the Batgirl, versus Edward Nygma, the Riddler on the night before Batman's wedding to Catwoman, who will win? Good or evil? Pick up a copy to find out!

With Dark Knights Metal concluded, the time is ripe for Carter Hall to return to the DC Universe in HAWKMAN #1! Now Hawkman is on a quest to learn why he has been reincarnated so many times, and that quest will take him around the globe, and force him to confront his past lives across time AND SPACE!

Eel O'Brian was a criminal, a thief and... well, dead... as far as his old gang is concerned. But now Eel looks towards a new life for himself in PLASTIC MAN #1 (OF 6), one more heroic than ever before! Now he's stretching himself thin trying to stay good! But does trying to take revenge on your old mob boss and making a woman fall in love with you really count? Well, at least he's trying...

Image's extreme team, Bloodstrike, returns to comics with BLOODSTRIKE #0! Witness the origin of Cabbot, the team's leader (who looks absolutely nothing at all like Cable *wink wink*) whilst Bloodstrike is unleashed upon the world once more, written and drawn by indie artist supreme,  Michel Fiffe.

If Harry Potter is too nonsensical or too juvenile for your tastes, then jump into the MAGIC ORDER #1 (OF 6), from superstars Mark Millar and Olivier Coipel, where magicians actually do something for the non-magical folk! With a TV series on Netflix not far away, get an early taste of the story and see if it will be for you!

If you prefer more of a sci-fi flavour mixed in with your wizardy, then look no further than PROXIMA CENTAURI #1 (OF 6)! Trapped in a spectral zone that is part of the manufactured dimensional sphere, known as Proxima Centauri, wizarding adventurer, Sherwood Breadcoat, has been sent on a salvage mission by the scientist H. Duke! Written and drawn by another indie champion, Farel Dalrymple.

And if you needed a little more, Dalrymple in your week why not join Alemendra Clementine and her crew to save the world from an evil wizard in IT WILL ALL HURT TP ! What started as a webcomic exploring the comic book medium has now flourished into a book of its own.

What happens after you fulfill your purpose in life? That's the question STELLAR #1 sets out to explore, with the character of Stellar, who was taken as a child and turned into a weapon to end an intergalactic war. She succeeded. But now she finds herself without purpose, living as a mercenary and coming into conflict with those who can't leave the warmongering behind them!

Before he turned Captain America into a HYDRA stooge, read Nick Spencer's entire Ant-Man run with ASTONISHING ANT-MAN COMPLETE COLLECTION TP! Check out what Scott Lang was getting up to in the Marvel Universe just before and following the epic Secret Wars event, both things good and bad! Will Scott be able to stick to the path of a hero, or will he be pulled back into his life of crime? We swear, he never considers joining HYDRA...actually wait, what happened in Secret Empire again?

When the Doom Patrol meets the Justice League of America, you get: DC YOUNG ANIMAL MILK WARS TP! Featuring new, freaky spins on your favourite DC heroes, can they unite to defeat the villainous corporation, RetConn, along with their psychic cows and radioactive milk?

After his origin but before the events of "Seed of Destruction", Hellboy worked for the BPRD! Now some of those intervening adventures are collected in HELLBOY COMPLETE SHORT STORIES TP VOL 01. This volume collects Hellboy's escapades from 1947-1961, with the stories "The Crooked Man", "Double Feature of Evil" and the complete "Hellboy in Mexico", there's plenty here to keep you entertained!

And for those big time Helloy collectors, get a closer look at the work of Mike Mignola and Gary Gianni with HELLBOY INTO THE SILENT SEA STUDIO ED ! With lots of behind-the-scenes looks at Gianni's penciled artwork and commentary on how Mignola and Gianni worked together to bring the story to life. A must-have for fans of either of the creators!

Before we return to the adventures of the original Thor, go back to the last days of Jane Foster's time as the Mighty Thor with MIGHTY THOR PREM HC VOL 05 DEATH OF MIGHTY THOR! With her cancer getting worse, Jane may not have to wait until the end of the War of Realms to reach the Gates of Valhalla!

A scheme to become filthy rich may not go as easily as planned in BY NIGHT #1 (OF 12). When aspiring documentarian Jane reunites with her friend Heather, an amateur explorer, they find themselves transported into another world after exploring an abandoned building. All they have to do is survive the countless monsters who call that new world home!

Nancy Drew meets the modern age in her new, self-titled series: NANCY DREW #1. She's still the best at everything, especially solving crimes, but a mysterious message she receives will bring her back home, and make her rethink which of her friends are still friends, and which have become her enemies, especially the one hell-bent on killing her! From Hawkeye and so West Coast Avengers superstar Kelly Thompson.

For the dedicated fans of the new Han Solo film comes the ART OF SOLO STAR WARS STORY HC. Jam-packed with concept art, sketches and paintings, get a closer look at the latest journey into the galaxy far, far away!

While still popular today, the Beatles were never more so than in 1965! Take a closer look at that time with FAB 4 MANIA GN BEATLES OBSESSION , where acclaimed cartoonist, Carol Tyler, tells of her memories of the period, and how the band shaped her as a teenager and an adult!

The lives of the three brothers continues in GRASS KINGS HC VOL 02 . When the leader of the brothers and their trailer park community, Robert, uproots the community in the search for a potential, yet fabled, serial killer, the other two brothers, Bruce and Ashur, must decide if he is still fit to lead them!

Explore how animals have been used to explore the human condition with JAW COOPER ART BOOK FAMILIARS, which draws upon occult themes for its inspiration.

If one book of J.A.W. Cooper isn't enough for you, then also check out his examination into the relationships between animals and plant life with JAW COOPER ART BOOK FLORA & FAUNA !

Everything good comes in threes, and the work of Cooper is no exception, with the arrival of JAW COOPER ART BOOK VISCERA ! Within is contained a raw look at the creative method, how we strive to create that which we most want to experience!

The conclusion to Johnny Ryan's gory space odyssey arrives with PRISON PIT GN VOL 06 ! The series ends with a bang, delivering an extra-length volume that ties up everything set into motion over the last four years and five volumes!

With an influx of new ways which people identify their gender, it can be easy to accidentally settle upon the wrong pronoun to reference everyone by. But never fear, the QUICK & EASY GUIDE TO THEY THEM PRONOUNS GN  is here to help you out of those situations. With a guide to each pronoun, you can move beyond the simplicity of the ordinary "they/them" pronouns!

Stanley Dance lived his life the way he always wanted to, but his way of living life never anticipated one thing: getting old! Now his final chance at redemption is at hand in SLOTS TP VOL 01, which collects the first six issues of the series.

POW! How's that for a list?! If you spotted something else you'll be needing us to put aside for you, just make sure to let us know before close on Tuesday.
Until we see you next, have a great read, live life and read comics!