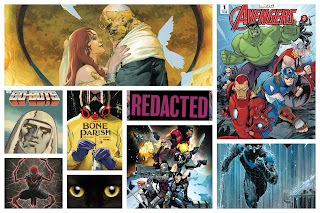 Hope you've managed to stay on top of your Christmas Day prep. Thankfully this week's shipment is nice and small, so you don't have to worry about breaking the bank picking up your latest order.
So for the first time ever, EVERY ITEM from this week's list gets a spotlight!
Check it and HAPPY HOLIDAYS!

With the Christmas cheer upon us, you'll be in the right mindset to celebrate a union more than 50 years in the making when Ben Grimm and Alicia Masters finally tie the knot in FANTASTIC FOUR #5. It isn't a dream, an imaginary story or an alternate universe, this one's for real, folks, so let's hope Marvel put Joe Quesada and Mephisto on the "No Entry" list.

Otto Octavius has shed his tentacles once again and donned the webshooters and waldoes in SUPERIOR SPIDER-MAN #1, from Christos Gage and Mike Hawthorne. The Superior Octopus is no more, and now Otto strives to once again prove himself the most Superior Spider-Man, not just on the streets of San Francisco, but the multiverse!

You might be enjoying some time off, but the good people at Marvel Comics still bring you the next instalment in the X-Men Disassembled story line with UNCANNY X-MEN #7. Weirdness abounds in this issue, featuring: the Horsemen of Salvation, the potential coming of X-Man and... a return to the Age of Apocalypse? If this book doesn't take you back to the 90s, nothing else will.

Speaking of the 90s, another old team from that era reforms in Ed Brisson and Dylan Burnett's X-FORCE #1. With Cable dead, his former New Mutant recruits, Domino, Cannonball, Shatterstar, Boom Boom and Warpath, recreate the original X-Force team to hunt down their former leader's murderer and avenge Cable's death.

The most mysterious comic hitting the shelves this week is HELLBOY AND BPRD 1956 #2 (OF 5), from Chris Roberson and a slew of artists such as: Yishan Li, Mike Norton, Michael Oeming and Dave Stewart. Plot threads from the previous issue will be picked up, but you'll have to pick this comic up yourself if you want to know where those threads lead.

The Carbutt father and son duo continue to seek shelter from the deadly, invading Martian forces in MARS ATTACKS #3, but now they have the might of the US Military to help them out. The military believe they have the firepower to crush the Martians like bugs, but these bugs are a little bigger than the ones you'll find on Earth.

Tom Scioli continues his brand new saga of robots and humans trying to co-exist in GO-BOTS #2. Cy-Kill and his followers, the Renegades, have declared all out war on humanity, and so far, the bots are winning. Now it's up to Go-Botics freshman AJ Foster and veteran Go-Bot racer Matt Hunter, along with their friendly Go-Bots, Scooter and Turbo, to rally humanity and spur them into action.

We've got our family-friendly Spider-Man comic, now enjoy some more of your favourite Marvel heroes working together in all ages adventures with MARVEL ACTION AVENGERS #1, from Matthew Manning and Jon Sommariva, the same team that bring you Batman/TMNT Adventures. The heroes have just joined together to fight a threat bigger than any one of them, and together, they will save the world.

Robert Kirkman and Chris Burnham bring to you your monthly dose of excessive violence and cussing with DIE DIE DIE #6, but that's all we know, for Image have... redacted it! You'll need to trek the journey to the store if you want to know what's coming in this latest issue.

Chelsea Cain and Kate Niemczyk deliver another great issue of MAN-EATERS #4. A book that picks up where the last issue left off, as well as providing a good jumping on point for new readers who have decided the heed the hype and get in on the action. This issue details how to defend yourself from the deadly cats... the titular Man Eaters!

Cullen Bunn's latest series continues the conflict between the Winters and the Cartel in BONE PARISH #5, and the Winters are gaining the upper hand with the Ash on their side. But using the Ash is a double-edge sword, and their upper hand might be crushed as members of the Winters succumb to a condition known as Ash Madness. Maybe the risk isn't worth the reward...

If that last preview tickled your fancy, but you've missed out on issues 1 through 4, then you are in luck, for Boom! Studios has taken the initiative to put out BONE PARISH TP VOL 01 DISCOVER NOW EDITION, which immediately brings back those first four issues in one, single volume. Go back to the beginning of Cullen Bunn's horrific saga of a new drug turning the streets of New Orleans into a nightmare, for gangsters and street walkers alike.

Following the previous events of the Long Payback, Terry McGinnis returns in BATMAN BEYOND TP VOL 04 TARGET BATMAN, from Dan Jurgens and Will Conrad, and this time, Batman has backup. But can this new ally be trusted to aid the Batman of the Future, or will it all end in tears? Terry is on the hunt to find out which.

Before their work together on the sleeper hit of 2018, Gideon Falls, Jeff Lemire and Andrea Sorrentino worked together on the New 52's Green Arrow, their entire run collected together with GREEN ARROW WAR OF THE CLANS ESSENTIAL EDITION TP. During these issues, Oliver Queen finds out that his stranding on a deserted island was no mere accident, and that the Queen family has been at war for generations. Whether you're a Lemire/Sorrentino fan, a Gideon Falls fan looking to branch into DC or a Green Arrow fan, this is the book for you!

A new era of Dick Grayson's life begins as Ben Percy takes the reigns with NIGHTWING TP VOL 07 THE BLEEDING EDGE. With technologists looking to upgrade Bludhaven like never before, it appears the city's problems are solve and a utopia is on the horizon. But when Dick starts to scrape at the foundations, he'll uncover the true, sinister purpose of the upgrades; one, not of revenge, but reckoning.

It's an attack on two fronts in SUPERMAN REBIRTH DLX COLL HC BOOK 03, from the acclaimed creative duo: Peter J. Tomasi and Patrick Gleason. Following the harrowing events of Black Dawn, Superman finds himself in the antimatter universe of Qward, where his only potential ally is the fallen Green Lantern, Sinestro. Back in Metropolis, Lois Lane profiles Deathstroke the Terminator, an potential, Pulitzer prize-winning scoop and it may only cost... her life!

And that is all she wrote. Than itty bitty baby shipment to finish the year, that will be waiting for you first thing Boxing Day. So until we see you next happy holidays, live life and read comics!