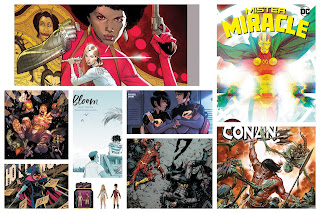 Second week of our anniversary, there is still plenty of chances to make it in to get a ticket to win our $500 Gift Voucher Giveaway! Also there is a keen week of comics coming in too, so take a look below.

In the mutant utopia that is the Age of X-Man, mutant students are required to attend the Summers Institute for Higher Learning. One day, they will become the future of the Marvelous X-Men, but even in an age of peace, teenagers will rebel in AGE OF X-MAN NEXTGEN #1 (OF 5), from Ed Brisson and Marcus To. Glob, Armor, Anole and Rockslide will team up to find ways to defy the expectations placed upon them.

Al Ewing, Jim Zub and Mark Waid, the team that brought you Avengers: No Surrender, reunite to bring you AVENGERS NO ROAD HOME #1 (OF 10), a new, weekly Avengers adventure. Darkness has fallen upon the Marvel Universe, and now seven long-time Avengers and one newbie set out to bring back the light.

In the dark, gritty, supposedly mature age of comics in the 90s, Alex Ross and Kurt Busiek lit the spark that made readers fall in love with the days gone by of the Marvel Universe. That book was Marvels, and now, to celebrate 25 years since that momentous series, Marvel invites you back to relive the experience with MARVELS ANNOTATED #1 (OF 4). Starting with the beginnings of the superheroic age in the 1930s, it also features annotations from the creators, giving you an insight into the creation of a book unlike any other.

Conan the Barbarian's return has made quite a splash at Marvel, but after you read SAVAGE SWORD OF CONAN #1, that splash will become a tidal wave of praise. Written by Gerry Duggan and featuring art from Ron Garney, Conan finds himself captured by a pirate crew. But these pirates will learn what a mistake they've made in short order, that is, if they survive their encounter.

Following the apparent demise of Darth Maul, Darth Sidious quickly took on a new apprentice: the fallen Jedi Master, Count Dooku. In STAR WARS AOR COUNT DOOKU #1, from Jody Houser and Luke Ross, see how Dooku, as Darth Tyranus, carried out his master's machinations and how it led to his complete turn to the Dark Side.

Joshua Williamson continues to explore the mystery he set up in last week's Batman issue with FLASH #64 THE PRICE. With Batman's lack of oversight leading to the death of Wally West at the Sanctuary, he and the Flash aren't on the best of terms. But the pair will have to put their troubles aside if they want to close the book on a cold case.

Zan and Jayna, the titular twins, are exiled from their home planet and trying to navigate their way through adolescence on Earth in WONDER TWINS #1 (OF 6), from acclaimed writer, Mark Russell and Stephen Byrne. While attempting to make friends, settle in and intern at the Hall of Justice under Superman's watchful eye, can the Wonder Twins find their place in the world?

The pop cultural legend that is Kevin Smith returns to comic books with HIT-GIRL SEASON TWO #1, with art from Pernille Orum. Upon finding out that Hollywood moguls are looking at churning out a movie based on her violent lifestyle, Hit Girl is ready to give them a firsthand taste of it.

Misty Knight and Colleen Wing are both formidable forces on their own, but together they are unstoppable as the Daughters of the Dragon. But when Misty joins the FBI, does that mean the dream team will be no more? Don't bet on it, as you'll see in DAUGHTERS OF DRAGON MPGN TP, from Jed McKay and Travel Foreman, as the digital first series hits the printed page for the first time.

The end of their second year at university has arrived for unbreakable best friends Esther, Daisy and Susan, but things aren't slowing down one bit. Moving houses, breaking hearts, breaking bones, John Allison and Max Sarin aren't letting up in GIANT DAYS TP VOL 09. Let's hope our three protagonists will stay in one piece long enough to see their third year.

The news has broken! Bruce Banner's resurrection has been revealed to the world, and the world knows that if Banner lives... then so does the Hulk. In Al Ewing and Joe Bennett's  IMMORTAL HULK TP VOL 02 GREEN DOOR, Hulk must evade everyone, from the government to his old allies in the Avengers if he wants to be able to save the world from an infection only he knows about.

Marvel's huge comic event of 2018 comes to trade paperback with the release of INFINITY WARS TP, from Gerry Duggan and Mike Deodato. The Infinity Stones have come to Earth, and with them challengers to control them. Cosmic war is on the cusp to break out, and it will take Marvel's mightiest heroes to restore the peace and prevent the Infinity Stones from performing misdeeds.

The son of the Highfather, raised on Apokolips and the greatest escape artist on Earth, Scott Free truly is a man of the miraculous. But can even he escape the death traps and pitfalls of his puppeteers, Tom King and Mitch Gerads in the collected MISTER MIRACLE TP? With his wife, Big Barda, his new son Jacob and the flashiest of funkmen, Funky Flashman, there's nothing Scott can't escape... except death... maybe?

The adult fantasy masterpiece gets a new printing with NEIL GAIMANS & CHARLES VESS STARDUST TP NEW ED. Tristran Thorn falls in love with the most beautiful woman in town, and embarks upon an epic, coming-of-age quest to win her heart. If you've seen the movie, or just curious about another essential Neil Gaiman story, this is the book for you.

The Spider-Verse event united the Marvel Universe's Spider-People, but now the SPIDER-GEDDON TP looks to undo all that hard work. Christos Gage, Dan Slott, Clayton Crain and more bring the Inheritors back to power, and it'll take the combined might of original Spider-Man, the Superior Spider-Man, Miles Morales, Spider-Gwen, Spider-Woman, Spider-Punk and many more to prevent them from regaining their full powers. If they don't die first, that is. If that's not enough, you'll also find the comic book debut of Spider-Man from the 2018 video game.

The digital-first comic book sequel to the 2018 Suicide Squad animated film, Hell to Pay, arrives in print with SUICIDE SQUAD HELL TO PAY TP, from Jeff Parker and Matthew Smith. Amanda Waller, the director of the Suicide Squad, has obtained her Get Out of Jail Free card, but why did she need one so badly? Plus, Deadshot returns to the team, whilst Jason Blood tries to aid them, but is he more hindrance than help?

The Bens Acker and Blacker team up with acclaimed artist J. Bone to bring you the THRILLING ADVENTURE HOUR MARTIAN MANHUNT TP. A western story set on the planet Mars, follow the local lawman, Marshal Sparks Nevada, as he keeps his planet safe from threats from across the galaxy.

It's Cleveland, 1935 and Eliot Ness has set his sights on a campaign of prohibition, confident in his crusade after bringing down Al Capone. But Ness and his Untouchables may have bitten off more than they can chew in TORSO TP NEW ED, as body parts begin to wash up in Lake Erie Sound. Torso was one of Brian Michael Bendis' earliest hits, an now comes in a new printing to match up with the rest of your growing Jinxworld library.

Raymond Landy, an alcoholic with lousy brain tumour and lousier screenwriting career, arrives at a maximum security asylum, meeting space fugitive Makro Nomac, which sets the stage for GOD OF BAD MEN #1 (OF 4), from Colleen Douglas and Chris Zero. However, Makro's insistence that Landy's tumour contains the origin of God leads Landy to discover it's actually a datachip, that Makro himself put in his head.

Joshua Williamson and Andre Bressan's acclaimed fantasy series continues with BIRTHRIGHT TP VOL 07. As Mikey tries to atone for his past misdeeds, the search for Brennan and Kalista gets underway. Can Mikey overcome his demons and become Earth's greatest protector, or is it too late for his redemption?

Ari has graduated from high school and is longing to escape to the high rises of the city, but to do so, he'll have to find someone to take his place in the family bakery. One of those candidates, a young man named Hector, loves baking as much Ari despises it, but between them, love blooms, providing Ari doesn't ruin it. A touching, young adult gay romance is the centrepiece of Kevin Panetta and Savanna Ganucheau's BLOOM GN, and it's bound to become a timeless one.

From Cullen Bunn and Brian Hurtt, the team behind the popular Sixth Gun series, bring you a third helping of their Prohibition-era crime comic with a supernatural twist with DAMNED TP VOL 03 PRODIGAL SONS. Eddie has been able to stave off death and keep running the family, but now his time is over and he's left to search for his mother in the afterlife.

The 20th Century marked the beginning and rise of the comics medium, and Howard Chaykin gives you the lowdown on the history of it in HEY KIDS COMICS TP. From writer and artists, to distributors and even gangsters, some of the names are changed, but by God did these events occur.

Victor Lai barely escaped the cataclysmic obliteration of the "Long Con" comic convention but after evidence of potential survivors of the event surfaces, he'll do whatever he can to find them! Check out the LONG CON TP VOL 01 from Dylan Meconis, Ben Coleman and Ea Denich to see if he succeeds!

A longtime villain present in French literature and film, a master of crime and terror, Fantomas finally faces his execution. But Fantomas has decided if he is to die, he won't be going alone in Olivier Boucquet and Julie Rocheleau's WRATH OF FANTOMAS HC, where Paris has never been more nightmarish.

From the Netflix series, these action figures of characters Debbie and Ruth perfectly capture the excess of hairspray and fashion in the 1980s. If you have fond memories of the era or want something to engage in it , then you can't go past the GLOW DEBBIE & RUTH AF 2PK.

There it is. A great looking week of comics, ready for the reading come this Wednesday. If you've spotted something else you like the look of, just drop us a line before close Tuesday and we'll get it sorted for you. So until we see you next, have a great week, live life and read comics!