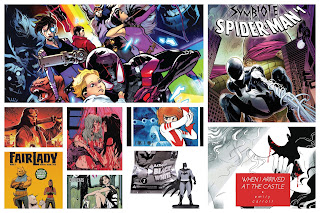 No messing around, let's get to it. This week's books, what are you keen for? Here's a little preview.

The Age of Republic has fallen, and an Age of Rebellion begins with Greg Pak and Marc Laming's STAR WARS AOR GRAND MOFF TARKIN #1. With the creation of a brand new, planet-destroying superweapon, Grand Moff Tarkin and the Galactic Empire reign supreme, but what hurdles did Tarkin have to take to get the weapon not only built, but also under his personal control? You better pick up this issue to find out.

There was no more iconic moment for Spider-Man in the 80's than when he got a sweet new set of black duds during Secret Wars (okay, maybe his wedding day might compete), but our time with it was all too short before it became the supervillain, Venom. Now, Peter David and Iban Coello set to right that wrong with SYMBIOTE SPIDER-MAN #1, presenting the first issue of a miniseries that sees Peter back in black, and with Mysterio causing mayhem.

From the entertaining podcasters behind the popular Adventure Zone podcast and graphic novel, Clint and Justin McElroy, comes the first of many War of Realms miniseries with WAR OF REALMS JOURNEY INTO MYSTERY #1 (OF 5) WR, featuring art from Andre Araujo. With the Earth under siege from Malekith's forces, and no Thor around to stop them, Miles Morales, Kate Bishop, Wonder Man and Balder the Brave team up to find their only hope: Thor's baby sister!

The Web of Venom gets more complicated and intricate in this latest offering of symbiote goodness from Frank Tieri and Danilo Beyruth with WEB OF VENOM CULT OF CARNAGE #1. New terrors are rising in the Marvel Universe leading to the upcoming Absolute Carnage event, forming in the depths of space, whilst evil is also originating on Earth as murder is being committed in the name of Carnage.

After a 1000 issues of detective work, is a Batman's job ever done? Of course not! Batman embarks on a new adventure from Peter J Tomasi and Brad Walker, starting with DETECTIVE COMICS #1001. The Arkham Knight has come to claim Gotham City for himself and protect from the threat he believes Batman poses.

Remember the good old days when you bought a comic, and you got a full story in one issue? The good people at Image do, and that's the deal they're offering with Brian Schirmer and Claudia Balboni's FAIRLADY #1. Amongst a cadre of male private detectives going by the name "Fairmen", Jenner Faulds is the only "Fairlady", and rampant sexism in the department leaves her with cases no-one wants. But within those hopeless cases may be the one that makes her career.

Following the exciting, yet heartbreaking conclusion of the Bat/Cat wedding, Joelle Jones takes Catwoman out on the rooftops of Gotham with CATWOMAN TP VOL 01 COPYCATS. Whilst tracking down former criminal cohorts to bring them to their timely justice, and having to deal with a new threat, the life of Selina Kyle is more than enough of an adrenaline rush without having to worry about Batman.

Take a walk through the life of a bear named Clyde in Jim Benton's appropriately named CLYDE GN. A fun, all-ages book that shows what happens when you leave behind what seems safe and familiar in pursuit of something risky and new, this is a great book to keep your kids reading during the school holidays.

A new addition to the Jinxworld library arrives with a very personal tale from Brian Michael Bendis, collected in its entirety in FORTUNE & GLORY A TRUE HOLLYWOOD COMIC BOOK STORY TP. Landing in Hollywood, see how Bendis, the indie comic book creator, navigates his way through Tinseltown and the motion picture industry.

With the new Hellboy film right around the corner, get the very best of in-depth looks at the making of the movie with HELLBOY HC ART OF MOTION PICTURE. Jam-packed with a thousands pieces of artwork and photography of the behind-the-scenes action, no Hellboy fan should pass this one up.

After many clashes with Lex Luthor's Legion of Doom, the latest line-up of the Justice League faces their biggest fight yet in Scott Snyder's JUSTICE LEAGUE AQUAMAN DROWNED EARTH HC, and for Aquaman, this one is personal. Ocean Lords from outer space have come to take their vengeance on the Earth, and to stop them, Aquaman may have to use a power even he fears.

Since the original film debuted in 1968, audiences and auteurs have all been shocked and wowed by the phenomenon that is the Planet of the Apes. To celebrate such a momentous franchise, artists of the highest caliber, such as Alex Ross, Paolo Riviera, Mike Allred and many more, join forces to bring you the PLANET OF THE APES ARTIST TRIBUTE HC, a wondrous hardcover filled with epic artworks inspired by the Planet of the Apes.

Catch up with Rainbow Rowell's latest issues of the Runaways with RUNAWAYS BY ROWELL AND ANKA TP VOL 03 THAT WAS YESTERDAY. A ghost from the Runaways' past has returned with an ultimatum, with the course of the world waiting to be set by the final outcome. If that isn't exciting enough for you, Alex Wilder is back too! The source of the team's greatest leadership and heartbreak, how will Alex's return affect the Runaways?

When he moved to DC from Marvel, Jack Kirby didn't want to have anyone pulled away from their current assignments, so he took the one that was already available: Superman's Pal, Jimmy Olsen, and proved that a title is only limited by the creator's imagination, not the headline character. Within the pages of SUPERMANS PAL JIMMY OLSEN BY JACK KIRBY TP, witness the beginnings of Kirby's magnum opus, the Fourth World, as well as the first appearance of Darkseid. The world of Superman and DC would never be the same after this one.

From the popular writer behind the Joker graphic novel and the current Batman Damned series, Brian Azzarello, comes a new miniseries in the form of FAITHLESS #1 (OF 5), featuring artwork from Maria Llovet. Faith likes to mess about with magic, and it's one of the things that makes her standout from the crowd. While many think it's cute or off-putting, Faith truly believes, and Hell has taken notice, letting her finally access that power.

From a variety of different creators, comes NIB #1 FAMILY ISSUE, an anthology magazine filled with stories that centre around the creators' insights about family relationships. From the price tag of pregnancy, genetic madness, deportation and the way the term family is being redefined by queer people.

It's a brand new manga from Sun Takeda, it's GLEIPNIR GN VOL 01! Shuichi Kagaya is a submissive doormat of a lad who can transform into a ragged beast, complete with a zippered compartment in his back and a huge revolver. That compartment that will come in handy, however, when he gets roped into helping his cute, dominating classmate find her murderous sister. Poor Shuichi...

The space opera manga that was the source material for the Star Blazers anime and a source of  inspiration for the beloved Mobile Suit Gundam franchise finally gets an English printing with SPACE BATTLESHIP YAMATO CLASSIC COLLECTION GN, from Leiji Matsumoto. Aliens have attacked Earth, leaving the planet irradiated and poisonous, giving humanity only one year left to live. But from desperation and survival comes humanity's last hope: the Space Battleship Yamato! Can the intrepid space crew find a cure for the Earth's ills in the depths of outer space?

The English translation of Mirka Andolfo's acclaimed Unnatural series continues with UNNATURAL TP VOL 02. Leslie has discovered within herself a power that is craved by many, but attained by very few. Still being chased by a shadowy organisation desperate for her abilities, she's lost her best friends, but may be finding a place for herself among a rebel faction that looks to take down the corrupt government.

For you lovers of magic and role-playing games, you have to check out Vitor Caffagi's adorable VINCENT GN BOOK 01 GUIDE TO LOVE MAGIC & RPG. Vincent has not had a good day in a while, so when he sees a girl called Lady smile, he falls head over heels for her. Little did he know that falling for that smile means he now must embark upon an RPG quest with his friends, in pursuit of his first, non-platonic love interest.

From the creative mind behind Through the Woods, Emily Carroll, comes a book full of dark, gothic imagery, and rich red blood. That book is WHEN I ARRIVED AT CASTLE GN, which combines passages of prose with terrifying, nightmarish pieces of art. A book that shouldn't be read after dark, unless you're especially daring.

If you love a good figure of Batman, but the statues are way beyond your price point, then definitely consider looking at the BATMAN BLACK & WHITE BLIND BAG MINI FIGS W1. With six different Batman figures designed by artists such as Amanda Conner, Darwyn Cooke, Jason Fabok, Patrick Gleason, Frank Quitely and Dick Sprang, you won't know which one you'll get, but be sure to try and collect them all.


But, if you don't want to spare any expense on your epic Batman collection, then you'll be dying to add the BATMAN BLACK & WHITE STATUE WHITE KNIGHT BY SEAN MURPHY. With the design taken directly from Sean Gordon Murphy's epic Batman: White Knight storyline, this is one of the best statues going around.

Things are looking pretty great for the week ahead, let us know if there is anything extra you are after before close Tuesday for us to get it sorted for you!
Until we see you next, live life and read comics!