New Comics For Wednesday 15th of May 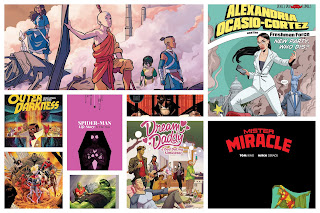 Well, looky here! It's this week's latest and greatest here for you to check out.
That Mister Miracle and Batman White Knight Hardcover are making the top wish list this week, how about you?

After conquering the Earth, it looks like Malekith has won the titular War of the Realms. But not all is as it seems, as the All-Mother, Freyja, has a strategy to win, and now with Jason Aaron and Russell Dauterman's WAR OF REALMS #4 (OF 6) WR, that plan begins in earnest. While she takes the Punisher, She-Hulk, Blade and Ghost Rider to Svartalfheim to destroy the Black Bifrost, Captain America, Captain Marvel and the Black Panther all lead their teams to victory.

To win the War of the Realms, you need a League of Realms, a team that features one representative from each of the Ten Realms, which is brought to you in WAR OF REALMS SPIDER-MAN & LEAGUE OF REALMS #1 (OF 3)WR, from Sean Ryan and Nico Leon. Thor was the original leader and representative for Asgard, but now he's missing, none other than Spider-Man steps in to take over leadership, as well as represent Midgard. Who will stand up and be counted to fight as Asgard's new champion?

While other teams are taking the fight to Malekith's forces in other realms, Captain Marvel leads the fight back on Earth in Dennis Hallum, Kim and Ario Anindito's WAR OF REALMS STRIKEFORCE WAR AVENGERS #1 WR. With allies like Venom, Deadpool, Captain Britain, Weapon H, Black Widow and the Winter Soldier, most fights would be easily won, but this isn't just a fight... this is the War of the Realms!


Malekith's forces have invaded Earth, and in this War of the Realms, Florida has fallen to the Frost Giants, becoming New Jotunheim. To liberate their homeland, four men have taken up the call of Freyja, the All-Mother, and will grow to gigantic new heights to combat their cold-hearted foes in GIANT MAN #1 (OF 3), from Leah Williams and Marco Castiello.

Chip Zdarsky and Mark Bagley are back with the next chapter in Peter Parker's real-time life story, with SPIDER-MAN LIFE STORY #3 (OF 6) taking us into the 1980s. It is a time of wars, both worldwide and secret, but can Peter still protect the ones he loves as Spider-Man?

After years of con jobs and scamming, Lando Calrissian has managed to at last go legitimate in STAR WARS AOR LANDO CALRISSIAN #1, from Greg Pak and Matteo Buffagni. But this new life of leisure and luxury comes at a cost, something Lando isn't yet covered for. So it's up to him, with a little help from Lobot, to pull one last scheme worthy of scoundrels across the galaxy to escape his old life for good. LOBOT, BABY!!!

From the acclaimed creator behind Dry County, Rich Tommaso comes a story of escaping the figurative horrors of city life for the literal horrors of more rural life in HORROR OF COLLIER COUNTY HC. Our protagonist is a young, single mother, who thinks that getting out the city and into the supposedly simpler lifestyle of Collier County, Florida will be a cinch. Too bad she didn't consider the swamps, alligators, gigantic bugs and zombie invasion.

Their lives upturned and destroyed by ruthless Vikings, father and daughter, Dag and Elseth, continue their quest for revenge in Brian Wood and Mack Chater's SWORD DAUGHTER HC VOL 02 FOLDED METAL. But winter is coming, which forces them to take shelter in a mountain refuge, where they have to fight off religious fanatics that live there, lest they fall and fail to quench their thirst for vengeance.

Quench your thirst for supernatural crime with a copy of LAST STOP ON RED LINE #1, from Paul Maybury and John Rauch. In Boston, Massachusetts, Detective Migdia Torres is investigating a vicious strangling in a subway car. With conventional forensics and investigative procedure failing her, she may have found a supernatural connection in a vagrant named Yusuf.

If you were digging revisiting Todd McFarlane's first issues of the Amazing Spider-Man in the Venom Epic Collection, then you're in luck as Marvel bring you the very next volume in the series, the AMAZING SPIDER-MAN EPIC COLLECTION TP ASSASSIN NATION. Also featuring work from Erik Larsen, David Michelinie and Gerry Conway, this book has Spidey teaming up with Captain America, Paladin, Silver Sable and She-Hulk, as well as facing off against foes like Mysterio, Green Goblin, Hobgoblin, Lizard, Rhino, Scorpion and his most deadliest enemy at the time... Venom!

Picking up where part one left off, Aang and the Team Avatar return to bring peace back to a divided nation in AVATAR THE LAST AIRBENDER IMBALANCE PART TWO TP, from Erin Hicks and Peter Wartman. With the tensions between the benders and non-benders in a town rising, will the team cool things down, or are things only just heating up.

Sean Gordon Murphy's critically-acclaimed series that shows how much more dangerous the Joker is sane than he is insane comes to hardcover with BATMAN WHITE KNIGHT HC. Trading in his garish green and purple suits for black and white, the Joker, as Jack Napier, is running for Mayor, and plans to bring City Hall down on the Batman's head. But can Napier keeps his demons hidden on the inside, or will Batman end up having the last laugh?

The latest issues of Al Ewing and Joe Bennett's momentous Hulk run continues with IMMORTAL HULK TP VOL 03 HULK IN HELL. The world is in Hell, even the mighty Immortal Hulk, and now the evil ruler found at the very depths has come to collect... the One Below All. It that wasn't exciting enough, find out how the Hulk's world will change once Betty Ross and Doc Samson rejoin the action in the world above.

With the DC Universe opened up and expanded unlike ever before following Dark Nights: Metal, there's a lot more space to explore. But with new space comes new dangers, and only the combined forces of a new Justice League can handle them in JUSTICE LEAGUE ODYSSEY TP VOL 01 THE GHOST SECTOR, from Joshua Williamson and Stjepan Sejic. Featuring the might of Cyborg, Starfire, Jessica Cruz and Azrael, they'll break new ground in space exploration and fighting foes previously unfought. But their most perilous unfolding comes in the form of Darkseid... who purports to be, not their enemy, but their ally! WHAAAAAAAA?!

The popular MMORPG gets a comic book miniseries, courtesy of Odin Shafer and Nina Vakeuva, with LEAGUE OF LEGENDS ASHE TP WARMOTHER. Ashe, an Iceborn, was gifted with a magical connection to her homeland, and now she's under pressure from her mother to become the leader her people need. On a quest to find the necessary qualities for leadership within herself, she'll learn the truth behind an old myth, which will reveal many dark secrets and leave the land of Runeterra changed forevermore.

Batman: White Knight isn't the only limited series getting the hardcover treatment, that honour also goes to the acclaimed Mister Miracle series from Tom King and Mitch Gerads, which hits the shelves as the MISTER MIRACLE HC. Scott Free, as Mister Miracle, is a New God who has wowed audiences and teammates with his death-defying escapes. But can he escape death? Or is he merely as mortal as the rest of us?

One of America's favourite politicians gets the comic book treatment with ALEXANDRIA OCASIO CORTEZ & FRESHMAN FORCE, from creators such as Josh Blaylock, Jill Thompson, Dean Haspiel, Tim Seeley and more. Congresswoman Alexandria Ocasio-Cortez joins the diverse group of fresh Representatives as they team up to fight the establishment and deliver some good, old-fashioned satire.

From the beloved creator behind Princess Jellyfish, Akiko Higashimura, comes her award-winning autobiographical manga, which begins with BLANK CANVAS SO CALLED ARTISTS JOURNEY GN VOL 01. High-schooler, Akiko, has dreams to become a mangaka (manga creator), even before she graduates, and signs up for an art class, to ensure her skills are good enough to be noticed. Thinking the class will be easy, Akiko is in for a shock when she finds out the sword-wielding teacher isn't interested in manga at all, but maybe that's just the teacher she needs.

The fan-favourite visual novel from Game Grumps gets a comic book adaptation with DREAM DADDY DAD DATING COMIC BOOK TP, from Leighton Gray and Vernon Shaw. In Maple Bay, players get to be a single dad, and try to romance other the other hot dads in town. With this series of five one-shots, you can get to know more about the dads you desire, and find out more about their family relationships.

Maia Kobabe's journey to figuring out their journey to identifying as nonbinary and asexual in their cathartic autobigraphy: GENDER QUEER MEMOIR GN. As well as following Kobabe's journey, they also answers many questions people may have regarding gender identity, making this a valuable guide for those who wish to learn more.

Joe Casey and Ian MacEwan present modern mythology on the streets of New York City with MCMLXXV TP. Starring Pamela Evans, she's a tough, no-nonsense New York cabbie, and she packs a mean tire iron to put evil monsters to rest. Experience the year of her adventure, collected in a single volume. A perfect stand alone adventure story for fans of Buffy and Frank Miller's Daredevil.

Science-fiction horror has never looked better than it does in John Layman and Afu Chan's OUTER DARKNESS TP VOL 01. Humanity has colonised throughout the galaxy, but dark secret lie in the uncharted outer darkness of space. Now, Captain Joshua Rigg and his crew aboard the starship Charon, dive right into the unknown, and will have to tackle such problems as demonic possession, hauntings, cosmic horror and much, much more.

Your favourite hard-drinking, blood knight maidens-for-hire are back in RAT QUEENS TP VOL 06 INFERNAL PATH, from Kurtis Wiebe and Owen Gieni. Still in the business of decimating the gods' creatures for fun and profit, you don't want to miss where their latest adventures take them.

Todd McFarlane's own take on the universe-killing genre starring his own, most famous creation, Spawn, is collected for your convenience in SPAWN KILLS EVERYONE COMP COLL TP VOL 01. Featuring both the sold-out one-shot and the four-part, sequel series, if you love to watch Spawn kill and look cute doing it, then you can't miss this one.

Holy black and white figurines, Batman! That's right, folks, we've got more BATMAN BLACK & WHITE MINI PVC FIGURE 7 PACK SET 1 back in the store, and they're itching to get out their blind bags and onto a display shelf near you. Featuring Batman designs from all-star artists, such as Amanda Conner, Darwyn Cooke, Jason Fabok, Patrick Gleason, Frank Quitely and Dick Sprang, will you be lucky enough to collect all your favourites?

There it is, another winner week. Anything extra you are after just be sure to let us know before close Tuesday night for us to get it sorted for you.
So until we see you next have an awesome week, live life and read comics.