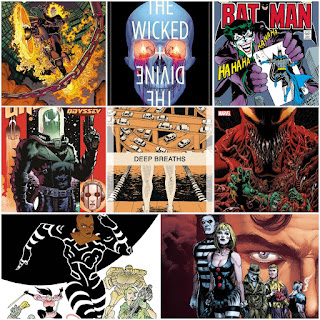 OCTOBER! Who would have thought the end of the year would come around so fast? Maybe we lost track of time reading all of this year's great releases...just like the ones we are expecting this week!

ABSOLUTE CARNAGE IMMORTAL HULK #1 AC
Absolute Carnage AND Immortal Hulk? How much carnage do you need?! With Thunderbolt Ross' Gamma powered corpse unearthed and in the wind, Bruce Banner sets out to find the grave robbers responsible. Feast your eyes on the ensuing chaos as this destructive duo come to blows.

BIZARRE ADVENTURES #1
Celebrate Marvel's 80th with this collection of weird quests and strange tales! Join Shang-Chi, Ulysses Bloodstone and Dracula as they meet their match in these thrilling supernatural stories.

CONTAGION #1 (OF 5)
An unstoppable, new evil of unknown origin has come to infect the marvel universe. With every hero New York has to offer joining the fight against this sinister substance infecting heroes and civilians alike, this book is sure to go VIRAL!

GHOST RIDER #1
With his brother Johnny blazing trails through the underworld, Danny Ketch is forced to take on his mantle as the Spirit of Vengeance. Meanwhile Johnny Blaze is finding that being the King of Hell isn't as easy as you'd think, as he is the first line of defense against the demonic hordes trying to escape and the other lords of hell making a play for his throne.

HOUSE OF X #6 (OF 6)
This is it. The finale of the revolutionary series that will shape the X-MEN world for years to come.

MARVEL COMICS #1001
Turns out there was too much good stuff to pack into just one issue so they're doing another one! With superstar creators like Al Ewing and Amanda Conner coming together to celebrate Marvel's 80th, this is one you won't want to miss.

SPIDER-VERSE #1
Just as Miles Morales is getting the hang of being spider-man, he falls through a portal into a multiversal adventure featuring countless wacky versions of the web-slinging hero.

BATMAN #251 FACSIMILE EDITION
In this classic issue, the Clown Prince of Crime is on a homicidal rampage and out for revenge against the Dark Knight. It's going to take everything Batman has to stop him this time!

STRANGE SKIES OVER EAST BERLIN #1
As the Cold War lumbers on, a disillusioned American spy stationed on the Eastern side of the Berlin Wall struggles with his role in a conflict with no end in sight. But when he's sent on a mission behind enemy lines, he finds that the Soviets have a secret weapon, a monster from another world. But are they controlling this creature, or is it controlling them?

GRENDEL DEVILS ODYSSEY #1 (OF 8)
Matt Wagner's dark sci-fi, fantasy, horror brainchild is back. Journey the stars as Grendel Prime searches for humanity's new home. But will is end in humanity's salvation... or its destruction?

RUBY FALLS #1 (OF 4)
Ruby Falls is a small town with a big secret. When her grandmother starts letting details slip about a controversial cold case that shook the town during its mobster ruled heyday, Lana takes it upon herself to crack the case, no matter what it costs.

BLACK TERROR #1
Bob Benton is a boring pharmacist with a crush on his coworker. WAIT DON'T LEAVE! THERE'S MORE! It turns out boring Bob used to be a crime fighting hero and although he's trying to live a normal life, he's got an itch he just can't scratch... CRIME!

COPRA #1
Acclaimed comics auteur Michel Fiffe takes you on a thrilling journey as you follow this band of misfits gunning for revenge against their own leader. Copra is everything you loved about the insanity of Image Superhero titles but with equal amounts of melodrama.

DEAD EYES #1
Dead Eyes was a legendary stick-up man in the 90s until he pulled one last job and disappeared forever. At least that's what everybody thought. Now he's back and causing trouble for the cops and mafia alike in this new action-comedy from writer of Deadpool, Gerry Duggan and the artist of Mythic, John McCrea.\

NOMEN OMEN #1 (OF 15)
Becky Kumar is about to find out that no matter how fast you run, your past always catches up with you as she crosses a veil between our world and a realm of other worldly truths.

AVATAR LAST AIRBENDER TP TEAM AVATAR TALES
Join Team Avatar as they travel their world, making friends, helping old rivals and reflecting on their place in it. This anthology features stories that are both hilarious and heartwarming.

AVATAR LAST AIRBENDER TP VOL 18 IMBALANCE PART 3
The bender vs non-bender conflict reaches its boiling point in this thrilling volume. Ru and Yaling make a plan to rescue their mother and Aang grapples with a life-changing decision that only the Avatar can make.

BURY THE LEDE TP
Madison Jackson is a young reporter looking to prove herself, so when there's talk of murder at house of the richest family in Boston, she's first on the scene to get the scoop.

DOOMSDAY CLOCK HC PART 01
Seven years after the events of Watchmen and almost 2 years after the release of #1, Ozymandias has been exposed as the murderer of millions and now is looking to ditch his world and past behind to take up a new universe just over the way in.

GIANT DAYS TP VOL 11 (C: 0-1-2)
In their final year of university, Daisy, Esther and Susan must deal with dreaded exes, getting drunk at the Christmas market all while trying to pass classes.

AND ALL OF THESE ONES, that we didn't get time to write up but they are totally worth your time to check out!

Al Ewing and Joe Bennett's critically acclaimed run of Immortal Hulk finally gets the deluxe treatment with the IMMORTAL HULK HC VOL 01. Taking the best of horror and science-fiction, then mashing them together to redefine the Hulk like never before, so if you still haven't jumped onto this series, this is the best time to begin.

After a few scary weeks where it looked like Spidey was out of the MCU, it looks like he's back to stay for a little longer. So to celebrate his return, get an in-depth look at the concept art and other behind-the-scenes goodies from his last movie with SPIDER-MAN FAR FROM HOME HC ART OF MOVIE SLIPCASE. Let Eleni Roussos take you through the ultimate guide to how Spider-Man: Far From Home went from concept to final product, and get insight you won't find anywhere else.

Before every villain and their mother got their own comic books, it was a momentous occasion in the 70s when Dennis O'Neill and Dick Giordano were able to give the Clown Prince of Crime his own ongoing. While it's all nicely collected in a single trade paperback, if you're not sure whether to take the plunge or not, grab a copy of DOLLAR COMICS JOKER #1, which reprints the first issue and gives you a taste of what else lies out there in wait for the Joker as a protagonist.

October is upon us, which makes this month the perfect time for horror comics, and for that purpose, VAMPIRE STATE BUILDING #1 lies in wait for you. Featuring artwork from the acclaimed artist of the Walking Dead, Charlie Adlard, see how he moves from zombies to vampires as they siege one of the most iconic buildings in history: the Empire State Building.

Frank Miller is no stranger to putting his own spin on classic mythology, and now he sets his sights on Arthurian legends in CURSED ILLUS HC YA NOVEL, with Tom Wheeler. The Sword of Power lay in wait for the one true King, but what if instead it chose the one true Queen instead? Find out how Nimue transforms from an outcast to the ruler of her lands.

From local comics creator, Chris Gooch, comes his latest graphic novel, DEEP BREATHS SC GN. An anthology book full of comics featuring tension, violence, monsters and moments, you'll get stories that range from a space bounty hunter after a frog princess; a woman finding a condom where it shouldn't be and even one about a spoiled art student that gets his first freelance job. As different as the stories may be, look out for the themes that tie them together.

Kouhei Horikoshi's smash-hit manga series continues with MY HERO ACADEMIA GN VOL 21, as Class 1-A and 1-B continue to face off in Quirk battle training. Class 1-A has claimed the first victory in the best of five, but there's still a long way to go, and Class 1-B is fired up and pulling out all the stops. Will these battles be where each student will determine what kind of hero they will be?

As wacky and outrageous the show gets, learn about some of the scientific principles behind Rick and Morty's bizarre journeys with the SCIENCE OF RICK & MORTY UNOFF GUIDE EARTHS STUPIDE, from Matt Brady. Taking complex theories and concepts from biology, chemistry and physics, Brady combines them into a prose format that's easy to follow and easier to enjoy, which should leave you with at least a slightly better understanding at what's going on scientifically in all those Rick & Morty episodes.

All good things must come to an end, and sadly, Kieron Gillen and Jamie McKelvie's five-year long series of modern fantasy and gods is no exception as WICKED & DIVINE TP VOL 09 hits the shelves. Collecting the final arc, find out how it all ends, in spectacular fashion that pulls no punches.

If you're already missing Kieron Gillen and Die is just not enough for you, then this is the time grab a final printing of his new book with Dan Mora!
When a group of Nationalists bring back a monster from Arthurian times into the world, retired monster hunter, Bridgette McGuire, will escape from her retirement home to pass her legacy onto her unsuspecting grandson in ONCE & FUTURE #1 (OF 6) FINAL PRINTING (6TH PTG), from acclaimed creators Kieron Gillen and Dan Mora. But her grandson, Duncan, is a museum creator, what does he know about fighting monsters? Whatever it is he needs to learn, he needs to learn it fast, for this steep learning curve is one of the deadliest.

If you're in anticipation of James Tynion IV's incoming run on Batman, check out the latest printing of Something is Killing Children to tide you over during the wait.
In Archer's Peak, the children are disappearing and there seems to be no hope in finding the ones still lost, or restoring the childhoods of those who do return in the grim limited series starting with SOMETHING IS KILLING CHILDREN #1 (4TH PTG) from James Tynion IV and Werther Dell'Edera. Their only hope lies in the mysterious stranger, Erica Slaughter, who claims to be able to see the monster that is behind this evil, but are even her gifts enough to save the children of Archer's Peak?

SMASHING! Anything else you keen on be sure to let us know before close on Tuesday to ensure we have the best chance to fill your late request!
So until we see you next, have a great week, live life and read comics.

Posted by All Star Comics Team at 3:55 PM