Welcome back to another weekly update, we have a lot of plugs to get through so I'll just get straight to it.

First of all, because we should be plugging our own stuff in the blog space, make sure to check out our weekly All Star Recommends articles. This week we covered I Kill Giants. You can see the archive for all our recommendations here.

Once again we must give a plug and big thanks to Beat magazine for their flattering article. Thanks again to Beat for their coverage of the store and make sure you pick up the latest issue if you're desperate for a well taken photo of Mitch and Troy.

Frequent blog contributor and occasional behind the counter guy Dom wants to give himself a plug. He has a rather douchy blog called More Harman Than Good which covers literature, film and video games. Go and discover the fact that he is a lot smarter than he lets on by actually applying his honours degree to something. He also complains about the upcoming comic sequel to the 1990 film Total Recall which you can pre-order at All Star Comics if you'd like to tell him he is wrong.

As you know, we recently announced the winner of our $100 competition won by bike riding nurse extrodonare Blake Griffiths. This conincides with our gift vouchers which you can see above designed once again by Tim Hobday.

You might have seen Troy at the launch of a new comics line based in Melbourne FEC Comics. Check out their website here. They have some really cool and diverse stuff coming out and in our support of Australian comics, expect to find some of these titles here at All Star Comics in future.

We've mentioned it before but we'll mention it again because The Cult Vault nights at the Westgarth cinema are amazing. Be sure to check a film out there, this week the 1982 horror classic Poltergeist is playing followed next week by 1978's Invasion of the Body Snatchers and on the 25th of this month a film that divides All Star Comics down the middle, The Goonies. 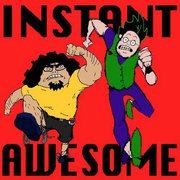 Another two friends of the store Owen and Dom (not the earlier mentioned Dom) have a podcast called Instant Awesome which can be found on Itunes here.  You can also check out their facebook page here. It covers a whole swath of nerdy topics. So give them a shot.

Till next week, keep an eye on our Facebook and Twitter accounts for all the latest updates and if you have an event, blog or anything you would like some promotion on, send us an e-mail.
Posted by All Star Comics Team at 3:51 PM