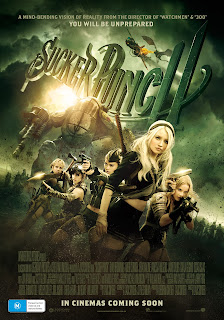 UPDATE: Thanks to everyone's amazing response, Warner Bros. Pictures and Village Roadshow have given us more passes and posters for you all, this changes the prizes a little so please read below for the new details. Updates are in Bold.

Thanks to Warner Bros. Pictures and Village Roadshow, All Star Comics Melbourne has a bunch of cool stuff to give away for the upcoming Zack Snyder film Sucker Punch. All we want you to do is tell us your favourite imaginary world which you would like to escape into. Tell us below, tell us in the Facebook comments or tell us on Twitter. You will go in the draw to win one of...25 prizes! While we have no intention of fooling you, we will be drawing the winners next Friday on the first of April. The prizes are as follows:
Prizes must be picked up from All Star Comics Melbourne. Limited to one entry per person. The names will be drawn from the All Star Barrell on Friday the 1st of April at 6pm. Sucker Punch opens in Australian cinemas on the 7th of April, it is rated M. Also, if you have the spare cash, you can also pick up a copy of the limited Sucker Punch Art book while your at it for only $46.95 from All Star Comics. (Sorry all, it sold.)

Big thanks once again to Warner Bros. Pictures and Village Roadshow for these great prizes.
Posted by All Star Comics Team at 10:36 AM