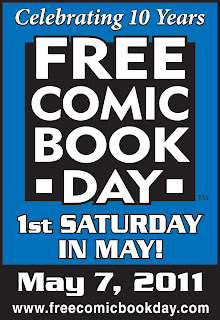 Hopefully you all know by now that Free Comic Book Day is May 7th, if not, you do now and we at All Star Comics Melbourne plan to make it a big one. We'll be revealing a lot of cool specifics and schedules over the next 2 weeks.

We're going to have everything you expect from a Free Comic Book Day like staff in crazy costumes (and let me tell you, they're crazy) and a lot more. We don't want to be the only ones in costume though, we're also inviting anyone to show up in a appropriate heroic attire. Now if you don't want to brave public transport in a costume, we're more than happy to provide changing rooms for anyone that requires one. Just let us know before hand and an estimate of what time you will be in so we know.

Also, if you do come in costume, we want to reward you for your efforts so we are going to have a costume contest. The way this will work is that we will take photos of everyone in costume and then post them on our Facebook page, whoever gets the most likes on their photo will win a $50 voucher and an exclusively designed All Star Comics Free Comic Book Day T-shirt.

You can bring cameras to take photos and staff in costume will be available for group shots. We will also have a photographer on hand to take photos which will be published on our Facebook page and of course, we encourage everyone to tag themselves in these photos.

Free Comic Book Day though is about the free comics and on Tuesday the 3rd of May there will be a special All Star Recommends (I assure you, we're still doing them) that will talk about the Free Comics that will be on offer this year. Our recommenders are currently fighting over who gets to write up what.

Keep an eye on Twitter, Facebook and here for more announcements this week. We are going to have other contests throughout the day and some other cool surprises. We promise to have updates on all these with schedules before the day.
Posted by All Star Comics Team at 1:42 PM