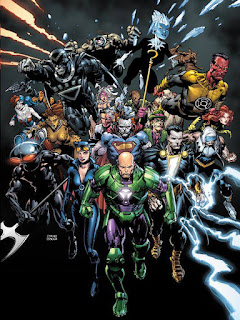 UPDATE
*Since announcing the DC VILLAIN MONTH coming up in September, we have had a lot of interest from people chasing all 52 single issues. We thought to ease the financial burden this might put people under that we would offer DC VILLAIN 52 DISCOUNT.
The standard off the shelf price would cost $345 for the 52 issues and for Standing Order customers it would be $310 for the 52 issues.

For those wanting all 52 we are offering them at a PRE-PAID DISCOUNT PRICE of $275 for the 52 issues, being 20% discount off the shelf price.

Conditions are that this only covers the 52 single VILLAIN issues and NOT the Forever Evil Mini Series. Also to get the discount the full $275 must be paid in full before the end of July.

If you are interested please get in contact with the store, via email, calling or dropping in.

In the July's Previews Magazine out in the next couple of weeks, you will find something a little different in the DC Comics part of the mag for their releases coming out in September.

DC are wanting to continue their line-wide events for this month, much like last year's "Zero Issue" month and obviously the start of the New 52 the year before that.

This year it is VILLAIN MONTH, where we'll see the release of FOREVER EVIL, a 7 part mini series by Geoff Johns and David Finch spinning out of the "Trinity War" mini next month. This promises to be a exciting event by itself but DC didn't think that was enough for you!

For the month of September we'll see the regular 52 titles put on hold and replaced with stand alone issues focusing on certain VILLAINS.

The titles will be based around the most popular character/team titles such as ACTION COMICS, SUPERMAN, BATMAN, DETECTIVE COMICS, FLASH, AQUAMAN, JUSTICE LEAGUE, to name a few and will have anywhere from 1 to 4 issues coming out over the month with villain issues related to that title. For a look at what to expect and the creative team attached to these titles take a look at our DC VILLIANS MONTH ALBUM on Facebook.

Each of these comics will sport 3D lenticular covers along with a $3.99 US price tag. 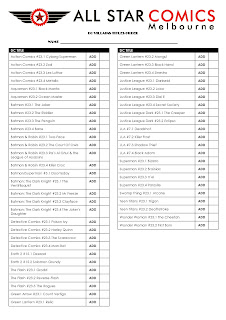 We really want to make it as easy as possible for you guys to secure the DC VILLAINS MONTH titles you are after coming up in September. Now you can print this form, fill it out, scan it and email it back to us at all.star.comics@hotmail.com to make sure you don't miss out. Of course there will also be copies available to fill out in store.

Stock will be extremely limited on these titles and due to the fact that the creative teams involved do not reflect that which normally appear on these books, we don't feel comfortable filling orders with them, effectively forcing multiple books on you that you might have no interest in.

So if you are after DC comics for the month of Septemeber, you need to let us know! :D

Cheers and thanks,
The All Star Family.

Posted by All Star Comics Team at 5:34 PM