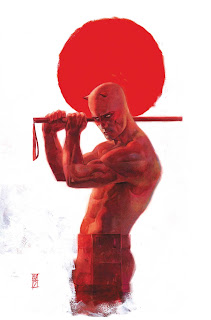 He uttered one word as he laid dying, a single clue, and irresistible bait for a search into the past for its truth. It is an obituary, yet also an eye toward the future for the legend of Matt Murdock, Daredevil.

Equal parts recollection of the great moments in Ol’ hornhead’s history, as well as a startling primer for those looking to see what all the fuss is about, Daredevil: End of Days straddles the line between love letter to the past and bold reminder of the character’s timeless ability to attract ‘new’ acolytes.

This meld doesn’t just happen in the plot and dialogue however. The art itself is the device that transports readers through the various eras; primarily the 80’s of Klaus Janson and Bill Sienkiewicz, and the early 2000’s Alex Maleev and David Mack, both pairs supporting each other brilliantly.

In fact, each art style itself serves to pinpoint key characters and flashes into Murdock’s past but it never jars, as the grit and variation that each artist employs has become one with the character and expectations of the tone and singular habitat of hell’s kitchen. Again, this either serves as a treat for long time readers or an exciting artifact for those looking to get the best of DD in one place. 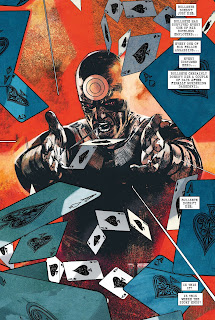 Primary credit has to go to writers Bendis and Mack however, as they have managed to create and give voice to a story that seems without creators. The pair prove to be invisible throughout, and are so attuned to the voices of Ben Urich, Elektra, Foggy, Peter Parker, Frank Castle and Matt himself that it feels like a historical excavation and recreation of pre-existing people. In his novel On Writing, author Stephen King states his belief that all stories are hidden and it is the writer’s job to merely unearth and polish them; to give new life to something long buried, and to be honest. Daredevil: End of Days feels the most true example of that idea that I’ve read recently.

With Frank Miller absent it might have seemed this was a foolish attempt to capitalize on his early (and most heralded) work on the character in some sort of nostalgic cash grab, but it both transcends and honours his work while simultaneously being a celebration of what has been done since without ego or highlight upon any individual creative voice. 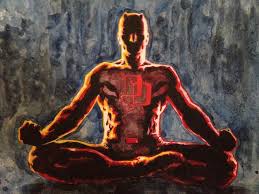 A modern masterpiece, and the best incarnation of The Punisher since Mr Ennis held the pen… Even then, wow.

Recommends written by Luke H
Posted by All Star Comics Team at 1:50 PM