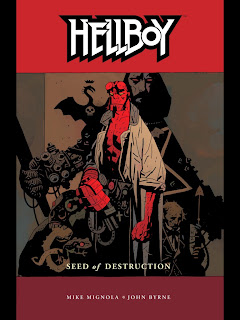 Having just celebrated it's 20th anniversary, we thought it was high time we showcased everybody's favourite paranormal investigator, HELLBOY. From the mind and artwork of Mike Mignola, Seed Of Destruction is the first volume of Hellboy collecting all the original tales, most co-written by John Byrne. 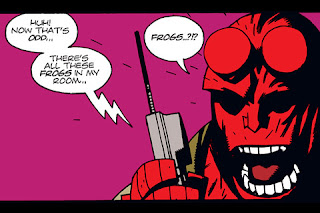 It seems almost pointless to go into how excellent this character is because it's a pretty good chance most of you already now and have owned this trade for awhile now. This collection is a basic origin tale introducing us into a world where Hilter's mad dash for the upper hand in World War 2 lead to the accidential release of Hellboy into our world from the dark beyond. Landing in the hands of the Allies rather than the Nazis, Hellboy as a devil baby, despite his appearance and mysterious origins is raised to be normal hard working, knock about, blue collar guy...who just happens to investigate things that go bump in the night.

Throughout this story Hellboy is reunited with the forces responsible for him coming to earth and result is a explosion of everything Lovecraftian.

At it's heart, Seed Of Destruction is tale of choosing your own fate and telling destiny to go to hell! 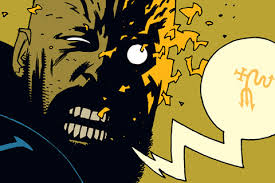 The art of Mignola has captured the imagination of comic fans for years. It is a pleasure to get the chance to view his earlier, more detailed work to see how his style has matured into the simpler, almost effortless minimalistic form it is today.

Even though John Byrne's writing on this first story is far different from anything you'll read of any of the Mignola scripted Hellboy, it is still every interesting to get an idea of what is going on inside Hellboy's head, something we never get to see again after this book. 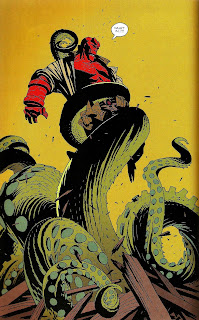 Again it is understandable if most of you reading this already own this Legend from it's seer popularity and cult status but it does make for a great gift for someone yet to read it.

If you have any questions, you know where to ask them. You can start to buy the Legend from this Thursday the 5th of September.

Posted by All Star Comics Team at 7:14 AM