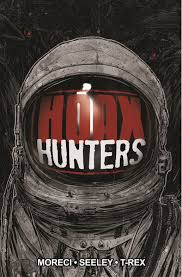 For an issue that is ten deep into a series, Hoax Hunters does a great job of dropping you into a story, with instantaneous accompanying stakes, without alienating you from the greater ideas and atmosphere of a world overcome by supernatural and otherworldly forces poking through into our reality via certain gifted/cursed individuals.

The Hoax Hunting crew are introduced in striking ways, beginning with a prologue which shows one of the hunters as a small child. Young Regan is presented first and seemingly sits upon a precipice between great responsibility and dark temptation. With a fiercely protective mother and an angry mob vying for her to be punished, the cursed seems the more likely descriptor for the powers she displays and public attention she receives.

The introduction of Donovan is similarly laced with affect and is my favorite, mainly due to how much the art and dialogue combine to say so much about the character before a knock at the door draws him back to his unwanted calling. There’s a hint of Lethal Weapon’s Martin Riggs to his melancholy that makes it one of the many standout moments.

Via these two and further, upon meeting the entire team, the Hunters are made to seem like a barely strung together group of reluctant but needed respondents to whatever lurks beyond.

The art doesn’t take long to establish character and mood with the glowing eyes, wrinkled brows and on-edge nature of each individual character conveyed with menace, tragedy and pathos. They all look exhausted and ragged, which really adds to how the characters emote, react and speak.

The overall rhythm is also strong, not wasting time for the action to ignite as well as character conflict, and the rooftop scene…!

A really strong point to jump on for those not yet reading and a superbly balanced plot/character escalation for those already reading!