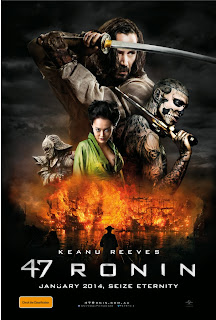 Keanu Reeves makes an explosive return to action-adventure in 47 Ronin.  After a treacherous warlord kills their master and banishes their kind, 47 leaderless samurai vow to seek vengeance and restore honor to their people.  Driven from their homes and dispersed across the land, this band of Ronin must seek the help of Kai (Reeves)—a half-breed they once rejected—as they fight their way across a savage world of mythic beasts, shape-shifting witchcraft and wondrous terrors.

As this exiled, enslaved outcast becomes their most deadly weapon, he will transform into the hero who inspires this band of outnumbered rebels to seize eternity.

Thanks to those lovely folks over at Universal Pictures and 47 Ronin in cinemas January 16, we have 5 double in season passes to give away.

To go into the draw for your chance to win all you need to do is tell us, which Japanese folklore (ancient or modern: manga/anime) would you want by your side going into battle?

Terms and Conditions:
All entries will go into the All Star Barrel and winners will be drawn at random.
Entries close 6pm Tuesday 14th of January and winners will be announced Wednesday the 15th. Passes will only be available to pick up from the store and winner must produce photo ID upon pick up. Passes MUST be picked up no later than a week after the draw. Any remaining passes after this date will be given away at our discretion to make sure they don't go to waste.

Thanks again to Universal Pictures and of course 47 Ronin, in cinemas January 16th.
For more information head to: