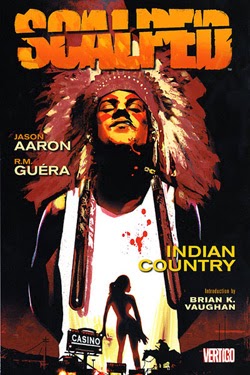 Just two weeks ago we had quite a special week of comics. In one shipment we had the release of Men Of Wrath #1, the new Thor #1 and the trade collection of Image's Southern Bastards. Why so special you ask? Three very different books, all written by the one guy, Jason Aaron. Flipping back and forth between epic cape titles to his hard edge creator owned titles has been a talent of Aaron's for the last few years and we thought it was high time to celebrate where it started (at least for us), with Vertigo's Scalped Volume 1.

Dash Bad Horse is the on the brink, car crash waiting to happen centre piece of this engrossing crime drama set to the backdrop of a Native American Reservation. Rolling back into his home town after a fifteen year absence, Dash learns quickly that not much has changed and if it has it's definitely for the worst. Quickly bringing his re-appearance to the notice of the Reservations Tribal Leader and local crime lord, Lincoln Red Crow, Dash finds himself in the position of deputy on a corrupt Tribal police force, at odds with his estranged Rez activist Mother and catching the attention of his troubled childhood love. Dealing with all this would be more than enough to push a runaway freight train like Dash over the edge but the mystery behind his return home is the thing that might get him killed at a moments notice. 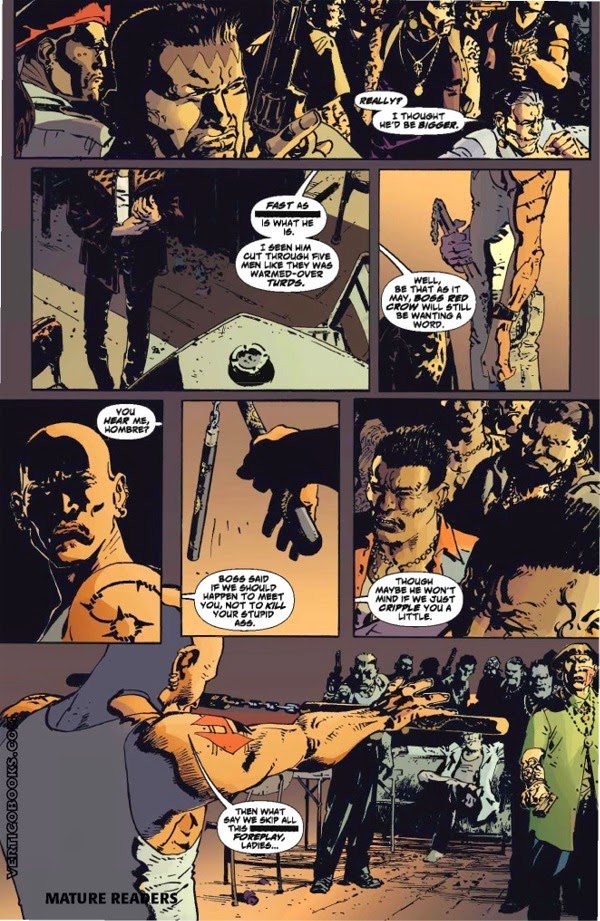 Considering just how well this crime drama is executed in it's scope, characters and setting, it's somewhat hard to believe this was one of writer, Jason Aaron first outings with an ongoing series.The character's bad choices and hard luck lives at times make it near impossible to turn the page with the sheer weight behind each panel. It seems most the main cast are doing their best to make good on the more than ordinary lives that have befallen them but we fast learn that there are no easy outs from life on the Rez. This is one of the many strengths to Aaron's talents on the series. The honesty in which he depicts the hardships faced by modern Native American people is brutal, telling and is as important to the story as any of the main characters.

R.M Guera's art is dark and harsh and perfectly suited to this series. Whether it's a smoke filled back water bar, the sun blazed dirt roads of local residents or the cloud covered night sky out in the open fields of a secret midnight meeting, Guera's art has the grit to have you tasting the dusk and feeling the sweat of every setting.

Not a tale for the weak hearted. This series manages to keep the characters right on the edge of the tipping point page after page and as the reader you'll be right there beside them the whole way. Just remember it's ok to exhale after each page. ;)

If you have any questions, you know where to ask them. You can buy the legend from this Thursday 15th of October.

All Star Legends. The legendary titles of the highest recommendation.
Posted by All Star Comics Team at 9:45 AM