ALL STAR RECOMMENDS FOR NOVEMBER 10TH 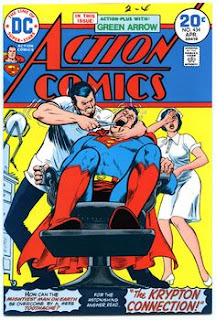 A shortish one this week (by my rambling standards) as I literally had a tooth pulled an hour ago. It looks like some sort of fungus found the X-O Manowar armour. Call me, Valiant Comics. 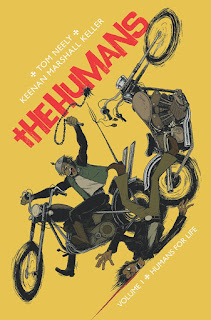 COMIC OF THE WEEK : THE HUMANS: HUMANS FOR LIFE
By Tom Neely & Keenan Marshall Keller
Published by Image Comics

It’s 1971. Simians rule the planet and we Homo sapiens are ‘skins’- their dumb, drooling gardeners, fuel pumpers, lab rats, blood sport combatants and, in certain cases, sex slaves. Gangs of wild bikers roam, feuding and forming tenuous allegiances with one another as the Vietnam War rages ever on overseas with US troops fighting against the Viet Kong. Yep. As Charlton Heston once famously screamed, “It’s a madhouse! A madhoooouuuusee!”

To compare Keenan Marshall Keller and Tom Neely’s The Humans with Planet of the Apes is pretty lazy reviewing but I’m going to do it anyway…briefly. The two stories share the surface conceit – apes are our masters and we humans/skins are most definitely the lower animal on the evolutionary scale, about as evolved as cavemen, slightly animalistic in appearance and cognitive abilities. This is where the similarities between the two stories stop, however. Planet...functioned largely as an allegory for both cold war concerns of nuclear disaster and race relations but The Humans, with its fighting, partying and rampant same-species and inter-species...errr...relations has no time for such highfalutin concerns unless you really want to draw a long bow and argue that it’s all about how horrible we became post-Altamont. Nope. Although I bet it’s crossed some minds…

Supercharged with the spirit of the grindhouse cinema and underground comix of the time, Marshall and Neely put a great deal of energy into the aesthetic of The Humans – I cannot imagine reading it digitally. Volume One, “Humans For Life,” with its faux yellowed pages, scrawly hand-lettering, denim vests and flares outfits, acid-dropping apes and rebellious rock and roll bands, looks like a decades-lost small press book made by some long dead, deviant, LSD-addled savant who watched Russ Meyer’s Motopsycho on an endless loop and obsessed over the comics of Spain Rodriguez. It has the feel of an artifact and that is possibly the highest compliment I can give it.

The Humans may be a comics engine designed to deliver dirty four colour thrills via Monkey Bikers existing post-Summer of Love, but there’s still a surprising amount actually going on. Ex-Human Johnny returns from the war with horrible flashbacks and a hatred of his country for what it made him do. He quickly hooks back up with his old crew, led by his brother, Bobby, but nagging doubts over the whereabouts of his recently disappeared girlfriend, Peg, continue to bother him as he adjusts back to “regular” life and battles fits of bleak nihilism and PTSD. The Humans are developing a new drug (tested of course on some unfortunate skins ) called “Spazm,” a hallucinogen combined with an amphetamine that causes its user to enter a kind of berserker state. The Humans intend to cut ties with their drug distributor, Abe Simian’s Flex Trucking Company, and peddle their own homemade wares – a move sure to shift the balance of power in their favour. And add to all this the biker feuds, leadership tensions and drug runs and you’ve got some standard biker gang storylines reanimated like the whole sub-genre got shot up with a cocktail of Spazm and chimp DNA.

Plot just seems to creep into The Humans, almost unexpectedly, as their desire to become ever more powerful will surely lead them into conflict with the crime syndicate they’re allied with and the mystery of Johnny’s girlfriend’s disappearance is given some ominous hints.

Neely’s kaleidoscopic double page spreads at once parody and celebrate psychedelic art, his various biker gangs are distinctively costumed and armed with a multitude of rubbery facial expressions and his fight scenes are both kinetic and hilarious. Tonally, Keller’s script is pitch perfect, with dialogue feeling ripped right from your favourite ‘70s exploitation film and perfectly paced world building.

Oh, and we can’t forget the bands with names like Smelly Tongues and their acid rock proto-punk and lyrics like:

All in all, The Humans is anthropomorphism at its most degenerate. It’s gross, gleefully exploitative and runs even hotter and faster than the bikes our anti-heroes ride. It’s the perfect antidote to the seriousness of much of mainstream comics and the raunchy, punk rock answer to those cynics wondering if Image has just become the place Big Timers go when they get tired of writing capes.

Keller and Neely are working very, very hard on this book – take a peek at Neely’s twitter feed once in a while for proof of that -- and their efforts are paying off. We’ve only scraped the surface of this world and with Johnny, Bobby, Marra, Karns and co. as our guides, I look forward to riding along as things get heavier, weirder and even more distinctly freaked out. As the gang’s motto goes, “Humans for life, Humans till Deth!” If you’re not sold yet, scroll on down to this week’s video for the collected edition’s official trailer.

(PS: if the creators somehow end up reading this, I beg them – please include some bosozoku in a future arc, it would be so perfect).

WEBCOMIC OF THE WEEK : VIVISECTIONARY
By Kate Lacour

Medical curiosities are cut, spliced and modified to make a part-gag strip, part-surrealist artwork in Kate Lacour’s excellent Vivisectionary. With more chapters forthcoming monthly, here’s yet another unique webcomic for your bookmarking pleasure. 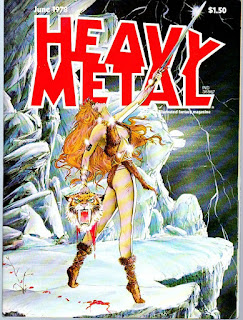 The mighty team of Corben and Strnad kick off their “New Tales of the Arabian Nights,” in this the June 1978 issue of Heavy Metal, putting their fittingly epic and bawdy spin on the Literary classic. In keeping with the book itself, the team creates a framing device for their stories, directly inspired by the original text – Sharazad is the latest “virgin bride” given to a King who has decided that no women can be trusted. Having decreed that he will find a new virgin bride nightly, execute her in the morning before she can break her vows and then send his advisers out to find yet another for the next night, Sharazad has become the latest young woman caught up in this murderous cycle and, well aware of her fate, she begins to weave epic tales that enthral the King, prolonging her stay of execution until she has no more story to tell. Corben’s colours pop as always and , already filled with grotesque Ifrits, intrigue and Sharazad’s “Stories of A Thousand Nights and a Night,” this opener is a beautiful teaser of what’s to come.

A preview of “Sabre” by Don McGregor and Paul Gulacy (really at the peak of his powers here) follows and it is bonkers. Sabre, a swashbuckling Jimi Hendrix, and Melissa Siren, a woman born from a test tube, team to battle mercenary Blackstar Blood amid ecological apocalypse and crowded narrative captions from the always overly keen mind of McGregor: “Imitation South Sea palm trees sway in the ventilator shaft created midnight winds as the painted stars disappear under the majestic sails and rising prow that devour the horizon!” Pretty Groovy. Sabre would go on to be published a few months later as not only one of the first graphic novels ever, but also one of the first ventures from the newly formed Eclipse Comics. McGregor, for those unaware, wrote one of the seminal runs of Marvel’s Black Panther and Killraven, proving himself to be one of true workhorses of ‘70s Marvel.

The debuts keep on rolling! Alain Voss’s “Heilman” also begins this issue. The tale of a Nazi glam rock star whose cosmic riffing accidentally summons a demon that eats all in attendance at his concert, Heilman returns home to ponder his next move. Refusing a massage from his personal eunuch, Heilman gets it on with The Wild Girl - his captive cat-woman hybrid creature - and decides that only he can remove the demon from this plane of existence through, you guessed it, the power of his Nazi rock guitar. Collapsing in the climactic effort amidst the biggest concert ever, this particular reader wants more please, as will Heilman pull himself together James Brown-style and finish the show? Thankfully more is indeed promised so we will find out shortly. Heil Voss.

Watch on as Neely’s lurid images of grotesque biker apes, coloured in lysergic bursts by Kristina Collantes, come at you like the acid flashback you never knew you wanted. It’s literally 35 seconds, so what have you got to lose?