ALL STAR RECOMMENDS FOR NOVEMBER 24TH

Another brisk one this week, as various deadlines for other things click together to form some kind of evil Voltron of deadline. Oh! And Jessica Jones! I’ve seen two of them as of this particular deadline. So good, eh?? 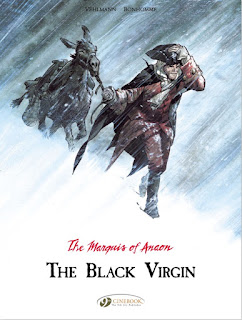 COMIC OF THE WEEK : THE MARQUIS OF ANAON: THE BLACK VIRGIN
By Fabien Vehlmann & Matthieu Bonhomme
Published By Cinebook

When last we saw Jean-Baptiste Poulain he was sailing away from The Isle of Brac, having had some supernatural experiences and almost unwittingly catching a murderer. The locals of Brac dubbed Poulain “The Marquis of Anaon” – “Anaon” meaning “Lost Souls,” and in Poulain’s second adventure, “The Black Virgin,” he’s accepted his role as a kind of ghost detective/debunker, travelling from place to place to solve crimes of potentially supernatural origin.

For the past two years, at Christmas, women have been horribly murdered near the Shrine of The Black Virgin in rural Puy Marie.  The shrine is of special significance to local gypsies, so of course suspicions are cast their way and in particular toward a lovely fortune teller. Poulain, struggling to ingratiate himself with the locals, is not wanted by either the travelling gypsies or the townsfolk. The superstitions of both sides swell and when another body is found, Poulain begins to doubt his ability to uncover the murderer.

The wonderful thing about the Anaon books is just how bumbling Poulain actually is as out slightly mystical, know it all crime solver. Even here, having realised some sort of self-fulfilling prophecy by owning the “role” of The Marquis of Anaon, he’s still far from becoming a brave and heroic crusader. He screams when he’s frightened, vomits when he finds a mutilated chicken placed in his bed as warning, can’t keep his pistol from quivering when pointed at a potential threat. Getting by on an aura of near mysticism that’s completely self-created, Poulain is in many ways as much of a fraud as the charlatans he encounters as he digs deeper into the mystery. However, all of these foibles actually make Poulain a far more human character and in many ways even more relatable. His intent is good and just, his open-mindedness in an era of bible-thumping and belief in curses is commendable, his bumbling attempts at bravery made somehow even braver by the fact that he can’t fight and scares easily. He pushes ever onward with minimal help, into grave dangers he’s in no way ready to handle.

Bonhomme’s art is as gorgeous as ever. His bleak woods of winter-dead trees, his snowfalls, his gypsy camps and frosted stonework impeccable and atmospheric.  Fond of framing longshots with spindly branches and Mignola-esque trees in the foreground as characters meet in the mid-ground, his staging is perfect, his layouts direct. Vehlmann’s script is brisk, yet punctuated by entire pages of quiet moments, allowing his artist to shine and his characters a moment to breathe.

Presented in oversize album format, “The Black Virgin” is a beautiful comics package that foreshadows further development and even eventual disaster for our fledgling hero. Cinebook touts itself as “The 9th Art Publisher” and with comics as cinematic, compelling and visually lovely as The Marquis of Anaon series, they’re backing up the boast. 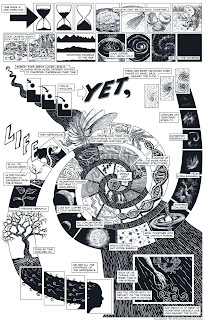 WEBCOMIC OF THE WEEK : AGAINST THE FLOW
By Nick Sousanis

I’m halfway through Nick Sousanis’ Unflattening and unless he totally screws up the back end it’s poised to be the most important example of the medium produced this year. Described as “an insurrection against the fixed viewpoint,” Sousanis masterfully utilises all the strengths of our beloved artform to maximum effect in breaking down not only comics, but the very nature of perception (and thus reality) in a blend of art, science and philosophy. It’s a special book, one that will make your synapses crackle as you turn the pages. Sadly, as Harvard University Press publishes it, Unflattening is not available through Diamond Distributors meaning All Star can’t get it for you. This sucks. Thankfully, however, you can get a taste of what Sousanis is all about (his intricate, thoughtful utilisation of comics space, his gift of transmuting scientific and philosophical thought into visual art) in “Against The Flow,” a one-page webcomic found at the Boston Globe. 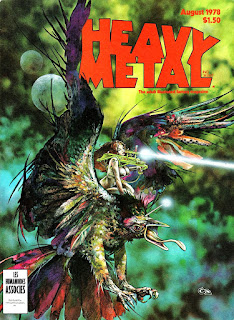 What? This can’t be right! Censorship hits the offices of Heavy Metal! So many letters from concerned moralists have been received that overt (male) nudity and copulation is to be toned down as of this August ’78 issue. No more will the swinging dicks of Corben’s heroes be seen and letterer extraordinaire John Workman has been told to shuffle word balloons around to cover up some of the more risqué sexual activity.

A moment of silence, please.

Anewly shackled Corben still belts out a typically lavish chapter of “New Tales of the Arabian Nights” with Sindbad having to deal with a (loincloth-wearing) demon who has made a vow not to harm Sindbad himself, but has set his sights on Sindbad’s wife instead. Slightly clichéd heroics from Strnad’s script here, but hey, at least there’s heroics. After last chapter I was practically rooting for the demon…

Zha and Nicole Claveloux’s “Off-Season” debuts, a surreal strip about two private detectives aboard an experimental train that unexpectedly dissolves around them before they reach their seaside destination. Finally meeting their client, a reedy young woman who does not reveal the nature of her business with our detectives by chapter’s end, Claveloux’s fine black and white cartooning with it’s odd, expressive characters and thoughtfully curved architecture make for some perfectly dreamy atmospherics.

Moebius’ “Airtight Garage” continues on in all its oddness and beauty, as does Gray Morrow’s “Orion,” Moench and Nino’s adaptation of “More Than Human” and Druillet’s “Gail.”Chapter Three of Voss’ “Heilman” brings to mind a lustier, even more unhinged version of Jim Starlin’s Warlock run in it’s distortions of time and space, with Heilman resuming once more the “eternal cycle of life and death” and coming up against a vessel that sucks in the souls of the dead which he has to orgasm his way out of.

Finally, “Planet of Terror” by Caza and Paul Montellierre deserves a special mention for its far-out, sensory overload graphics and love-filled climax.  A man presses a strange button in his elevator and is subsequently blasted into the cosmos. Finding himself a prisoner in an alien zoo, he is made to live in an apartment, wear a suit, eat cereal and watch his “masters” on TV with their “disgusting voices hollowingly babble vile incantations” (sic). Thankfully, respite from this drudgery and banal horror comes in the form of love when our narrator encounters a beautiful woman. This being a French comic, love and sex are the answer to everything and in their union, man and woman are transported to a psychedelic utopia of their very own. Kind of trite and obvious in a Slaughterhouse Five goes The Fifth Element way, but, man, “Planet of Terror” is just so beautiful to look at that it boosted my Hippy levels up 20% just reading it.

London’s Orbital Comics are back with another of their in-store Director’s Commentaries (last linked to in this column when Becky Cloonan stopped by Orbital to discuss Gotham Academy). This time it’s the Jasons, Aaron and Latour, hilariously and yet informatively and educationally pulling Southern Bastards first story arc apart with the breezy chatter of two very good friends.

Cameron Ashley spends a lot of time writing comics and other things you’ll likely never read. He’s the chief editor and co-publisher of Crime Factory (www.thecrimefactory.com). You can reach him @cjamesashley on Twitter.
Posted by All Star Comics Team at 5:37 PM