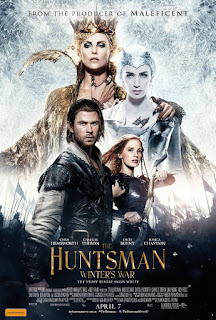 Starring Chris Hemsworth, Charlize Theron, Emily Blunt and Jessica Chastain, THE HUNTSMAN is the story that came before Snow White and the Huntsman, from the producers of Maleficent and Alice in Wonderland.


Thanks to those rugged folks from Universal Studios, to celebrate the release of THE HUNTSMAN : WINTER’S WAR in cinemas April 7th, we have 5 Double In-Season Passes to give away!

To go into the draw for your chance to win all you need to do is tell us, "Chris Hemsworth gives us a rather convincing man of the land performance in these film. What other rugged occupations do you think Chris would be good at and why? "

-Only entries made via the comments on the Facebook post will be included in the draw.
-All entries will go into the All Star Barrel and winners will be drawn at random.
-Entries close 6pm Monday the 4th of April and winners will be announced Tuesday the 5th.
-Tickets will only be available to pick up from the store and winners must produce photo ID upon pick up.
-Tickets MUST be picked up no later than a week after the draw. Any remaining tickets after this date will be given away at our discretion to make sure they don't go to waste.

Thanks again to Universal Pictures and of course THE HUNTSMAN : WINTER’S WAR in cinemas April 7th.

© Universal Studios
Posted by All Star Comics Team at 1:47 PM