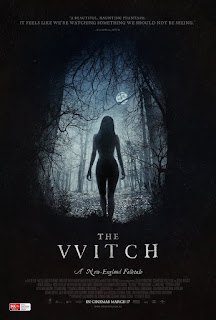 New England, 1630. Upon threat of banishment by the church, an English farmer leaves his colonial plantation, relocating his wife and five children to a remote plot of land on the edge of an ominous forest —within which lurks an unknown evil. Strange and unsettling things begin to happen almost immediately — animals turn malevolent, crops fail, and one child disappears as another becomes seemingly possessed by an evil spirit. With suspicion and paranoia mounting, family members accuse teenage daughter Thomasin of witchcraft, charges she adamantly denies. As circumstances grow more treacherous, each family member's faith, loyalty and love become tested in shocking and unforgettable ways. Writer/director Robert Eggers’ debut feature, which premiered to great acclaim at the 2015 Sundance Film Festival — winning the Best Director Prize in the U.S. Narrative Competition — painstakingly recreates a God-fearing New England decades before the 1692 Salem witch trials, in which religious convictions tragically turned to mass hysteria. Told through the eyes of the adolescent Thomasin — in a star-making turn by newcomer Anya Taylor-Joy — and supported by mesmerizing camera work and a powerful musical score, THE WITCH is a chilling and groundbreaking new take on the genre.

To celebrate the release of THE WITCH screening exclusively at Cinema Nova from 17th March, those magical folks from Universal Pictures are giving us 10 Double In-Season Passes to give away!

To go into the draw for your chance to win all you need to do is tell us, "Witches and possession are scary stuff. If you had to pick someone to be possessed by, who would pick and why?"

-Only entries made via the comments on the Facebook post will be included in the draw.
-All entries will go into the All Star Barrel and winners will be drawn at random.
-Entries close 6pm Monday the 21st of March and winners will be announced Tuesday the 22nd.
-Tickets will only be available to pick up from the store and winners must produce photo ID upon pick up.
-Tickets MUST be picked up no later than a week after the draw. Any remaining tickets after this date will be given away at our discretion to make sure they don't go to waste.

Thanks again to Universal Pictures and of course THE WITCH in cinemas 17th March
For session times head to : http://www.cinemanova.com.au/movies/10587.php

Posted by All Star Comics Team at 5:22 PM