ALL STAR RECOMMENDS FOR MAY 10TH 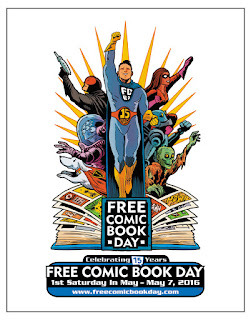 Hi there, I trust you’ve managed to dig yourself out from under a mountain of free comics.Some good swag there, huh?

A shortish one from me this week, as I think reviewing 45 FCBD comics in eight days short-circuited some synapses. 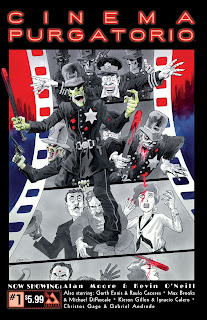 Like a jilted lover, I have rebounded from the constant delay of Grant Morrison’s debut as the Heavy Metal honcho (it was supposed to be February, then late April, then last week) over to the ever-dependable Alan Moore, who is spearheading his own anthology series, Cinema Purgatorio, which actually debuted last week from those rapidly reforming schlock-peddlers over at Avatar Press.

Initially, and monstrously, funded through a highly successful Kickstarter campaign – which I have mixed feelings about, honestly, as its huge success proves it wasn’t even really needed in the first place (unless Avatar couldn’t pay for it, which is the only assumption left to any reader going through the Kickstarter info) -- Cinema Purgatorio is chiefly a horror anthology presented in stark black and white, ad-free (yay) and perfect-bound in format.

Moore’s EC-inspired effort showcases some top-tier talent working on some really interesting material with narrative depth only hinted at by this first issue. Moore and O’Neill kick things off with the titular strip – promising to be a series of twisted “short films” that will slowly link together to reveal “the story of one woman forced to bare her soul.” It’s a nightmarish opening; the silent movie’s charm turned grotesque and cruel and fevered, with O’Neill amping up the cartoonishness of his work and heightening the strangeness in the process. I look forward to seeing where this heads.

Garth Ennis and Raulo Caceres debut their “Code Pru,” a character who is a paramedic for the paranormal, treating a suicidal, horribly sunburned vampire in this opening chapter. It’s not bad, with Ennis in his goofy mode and Caceres providing perfectly suitable art that’s as close to an Avatar house style as you’ll find. The true quality of “Code Pru” is to be proven over the coming months.

Max Brooks and Michael DiPascale’s “A More Perfect Union” is an alternate history tale with the Civil War being fought between the South and giant insects...none of which are seen in this opener, a puzzling decision by all creatively involved. Research-heavy (Brooks is annotating each chapter), this, like “Code Pru,” will prove itself with further development.

Christos Gage and Gabriel Andrade give us “The Vast” which sees a fighter pilot befriending a monstrous Lovecraftian-kaiju thing during a monster war and Andrade impressively draws it. Looks to have promise moving forward, the eventual monster brawls should be grotesquely brought to life.

It’s all solid stuff, but what really elevates Cinema Purgatorio#1 is Kieron Gillen and Ignacio Calero’s “Modded”.  Basically a bonkers satanic Pokemon story set on a wasteland Earth “38 years after the Etheric invasion” (a kind of demonic post-apocalypse), “Modded” sees a young girl named Fringe and her adorable pet daemon Fluffbumble (a kind of winged dog-lynx-daemon whose only power seems to be growing new vegetation suited to this ruined climate) wandering the earth.

Approached by “Daemonatrix” Tommy Zero, a daemon collector who simply must collect “them all”, Fluffbumble is forced to fight a technologically-enhanced daemon of Zero’s choosing or be simply forfeited into his epic collection of daemon battle beasties. There’s more here, but I’ll not spoil it. Suffice it to say that this is a killer spin on the Pokemon concept --arriving just in time for the original’s 20th anniversary –and it’s even fun and actually quite sweet (surely the first time that adjective has ever been used to describe an Avatar book).

Calero’s artwork resembles something like Darick Robertson inking over Doug Mahnke and Gillen wisely lets his artist do the heavy lifting. It’s beautifully detailed with superb post-apocalyptic Mad Max-esque costume design and wonderfully expressive characters. This particular animal lover is already a fool for Fluffbumble (who I’m pretty sure is my spirit animal) and the first chapter’s terrific climax will get its hooks in deep. Damn you, Gillen!

Head and shoulders above the rest of the pack (except for the titular tale which gives it a run for its money), Cinema Purgatorio#1 should be picked up for “Modded” alone. Everything else is a terrific bonus. You’ve got your work cut out for you in winning my affections back when you finally do arrive, Moz Metal... 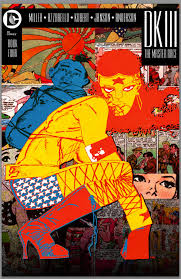 WEBCOMIC OF THE WEEK THEORY: FRANK MILLER’S RECENT WORK IS GOOD BUT IT IS NOT GETTING THE RIGHT COLOUR TREATMENT
By James Harvey

Not a webcomic per se this week, but easily some the most interesting comics related art criticism I’ve seen online in a while with James (Bartkira) Harvey recolouring some of Frank Miller’s much maligned DKIII work to prove a rather particular point: that Miller’s most recent art does not suck.
I’ve actually been of the opinion that Miller’s just been taking the piss with DKIII. His figures have been consistently monstrous, stretching the bounds of human anatomy in ways perhaps only Plastic Man could really manage. Is he burning his own legend down in some kind of apocalyptic late-life, eff-you crisis or perhaps reacting poisonously to Kubert and Janson doing their best recreation of his and Janson’s original DK style, I wondered?

Some of the comic’s actual narrative would seem to back both theories up, such as the below panel from issue #3, which John Kane over at Savage Critics also featured: 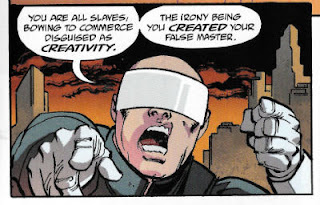 There’s nothing subtle about that.  Seriously, you could write a thesis on the self-reflexivity of this   weird, fascinating comic and it’s only halfway done...

While I personally have found the colour treatment of Miller 2016 to be really ugly (and before you bring it up - Lynn Varley’s digital colouring of DKII was ugly in an ironic way, hilariously prefiguring the now near ubiquitous use of flashy and garish computer colouring methods), I’m not a huge fan of the colouring of *most* modern mainstream comics anyway. Even still, I had no idea just how much of a deleterious effect this “bad” colouring was having on Miller’s work overall.

But James Harvey did. He recoloured some pages to prove it, transforming Miller’s art from the horrorshow self-pastiche that seems to exhibit signs of hatred for his subjects and possibly even himself into gristly, sinewy works of transgressive Pop Art. Is Frank Miller 2016 being misunderstood? Maybe, maybe not, for as Harvey points out, Miller did select his own colourist but just take a look at this and tell me that the entire aesthetic of the work is not given an immediate overhaul and upgrade.

COMICS VIDEO OF THE WEEK : FROM SYDNEY TO SHELLY BOND

No, I’m not ready to let it go just yet.

From 2015, an Australian girl named Sydney reads an open letter to Shelly Bond expressing her admiration for Vertigo’s departing Executive Editor and her love of one of the titles she edited, iZombie. It’s really sweet. It also shows Bond’s reach and influence as one of the most important women in comics and I hope she actually got to see this – Sydney looks like she’s actually cosplaying as Shelly, all she needs is that mod haircut and a rad V-neck sweater.

Posted by All Star Comics Team at 3:30 PM