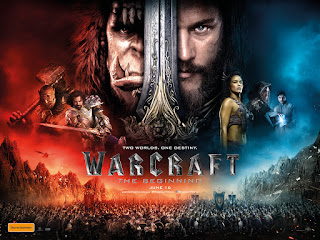 From Legendary Pictures and Universal Pictures comes Warcraft, an epic adventure of world-colliding conflict based on Blizzard Entertainment’s global phenomenon.

The peaceful realm of Azeroth stands on the brink of war as its civilization faces a fearsome race of invaders: Orc warriors fleeing their dying home to colonize another. As a portal opens to connect the two worlds, one army faces destruction and the other faces extinction. From opposing sides, two heroes are set on a collision course that will decide the fate of their family, their people and their home.

So begins a spectacular saga of power and sacrifice in which war has many faces, and everyone fights for something.

Thanks to those mythical folks from Universal Pictures and Warcraft in cinemas June 16th, we are giving you the chance to win one of ten double passes to the special preview screening, happening on Tuesday 7th June from 6:30pm at IMAX Melbourne.

To go into the draw for your chance to win all you need to do is tell us, "Which character of Warcraft lore, Knight or Orc do you identify with most and why?"

SPECIAL NOTE: As these prizes are for a specific time and date, please only enter if you can attend the screening on the listed date.

Thanks again to Universal Pictures and Warcraft In Cinemas June 16th
For more info head to:
URL: www.facebook.com/warcraftmovie
URL: www.warcraftmovie.com.au
Posted by All Star Comics Team at 10:11 AM