ALL STAR RECOMMENDS FOR NOVEMBER 15TH 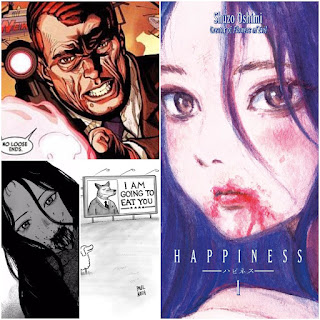 Do you remember how ridiculous and unbelievable it seemed when Marvel made Norman Osborn the US President? Yeah, doesn't seem so silly now does it...? Dark Reign indeed. 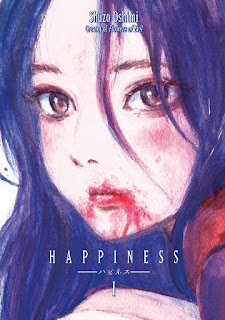 COMIC OF THE WEEK : HAPPINESS VOLUME ONE
By Shuzo Oshimi, translated by Kevin Gifford
Published By Kodansha Comics

Ah, adolescence. Pretty sure it was Tori Amos who called it the cruelest place on Earth. It's a time of confusion, hormonal surges, bodily changes and shifting peer allegiances. High School in particular is a social minefield that the comics medium loves to exploit, with its hotbed of teen angst, heartbreak, secrets, deceptions and liaisons, from the X-Men to Deadly Class to a veritable mountain of manga, comics set in and around high schools will be with us as long as there are teens attending them.

Creator Shuzo Oshimi has made a career out creatively exploiting the angst of adolescence, and a successful one at that. His previous work, The Flowers of Evil, is set in a Japanese middle school and cantered around the fallout from its protagonist stealing the gym clothes of the girl he's crushing on. The Flowers of Evil ran from 2009 and 2014 and it did not take long for Oshimi to follow up as Happiness debuted in 2015, with it's arrival in English coming just a few weeks back via Kodansha USA.

Like The Flowers of Evil, Happiness is set in a Japanese High School. However this time, Oshimi takes readers on a decidedly supernatural path. Happiness is essentially about a socially awkward teenager who just so happens to be a vampire. There's some obvious metaphors at work here, vampirism as a kind of unique sexual experience/awakening paralleling the horniness of teen years being the most overt. 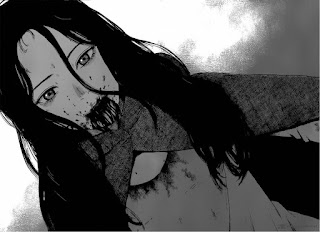 Our protagonist, Makoto Okazaki, is a first year high school student. He jerks off, tries to glimpse the underwear of short-skirted girls as they ascend staircases and generally is a fleshy bag of raging hormones. He's also a bespectacled, diminutive, shy kid who's forced to do things by the "cool kids" like buy their lunches and generally act as their errand boy. Things begin to change once Okazaki's preyed upon a beautiful and mysterious vampire who chooses to let him live. After recovering in hospital, Okazaki finds himself blessed/cursed with the vampiric condition - the blood lust, the weakness to sunlight -- but is also transformed into something powerful, able to fight back against his bullies and able to force himself into acts of near-heroism.

If that sounds kind of familiar, it should. Makoto Okazaki is basically a Japanese Peter Parker, the "wallflower" bitten by a vampire instead of a radioactive spider. There are plenty of echoes from Amazing Fantasy #15 to be found in Volume 1 of Happiness, furthering the cross-pollination of ideas going on in modern manga as it borrows Stan Lee-style superhero origins and transforms them in distinctly Japanese ways. Last December, I noted that Hiroya Oku's Inuyashiki feels very much like a warped Lee-Kirby story filtered through the Japanese experience and Happiness is comparable, if clearly aiming for a more horrific endgame. Okazaki crushes on girls above his social standing, has abilities he can't talk about, struggles to make friends and has a primary bully figure (his Flash Thompson is a kid named Yuuki) that he may well end up befriending. He's one family tragedy away from being Parker reincarnated as a Japanese boy.

Once bitten, Okazaki first notices the changes in his physiology when being overwhelmed by not just sunlight but also the scent of menstrual blood emanating from girls in his class (cleverly linked visually to earlier sequences of panty-glimpsing) and struck by urges he doesn't understand, harkening back to that idea of vampirism as sexual awakening. He suffers vertiginous spells of delirium, experiences surges of strength and also guilt at the actions his "powers" enable him to do. It's all classic teen hero stuff really, with some rosy-cheeked, sheepish expressions of horniness thrown in for good measure and some literal "off-camera" wanking in place of "organic webs" spraying all over the place.

Happiness ostensibly being a horror book, however, you'll likely get the foreboding sense that things will darken as the narrative moves forward through future volumes and Okazaki is forced to come to terms with what he is now and what he must do in order to survive.This is quite possibly not the redemption story that Spider-Man so clearly was early on. The classic "with great power comes great responsibility" will very well be tempered by the addict's need to gorge on blood. "This...this isn't me," Okazaki says to himself at one point, a clear signal as to what the source of inner conflict will be moving forward and indicating that the series' title is brutally ironic.

Artistically, Oshimi's not likely to win the top honours on your favourite artist lists, but he's skilled at producing incredibly, compulsively readable pages, with excellent shot choices. The work is clean and stripped back, anything that could possibly get in the way of reader momentum removed. I've mentioned this before, but manga is read *fast* in Japan, too fast for my liking, readers plough through phone book-sized anthologies as though panels are animation cells ripping by onscreen. Oshimi's work seems perfectly geared toward this particular reading method and you'll likely feel the pull to move forward ever faster as the story continues as well.

Interestingly, the scratchier and stranger Oshimi gets, the more I dig his work. Real visual highlights from the book come when he busts out his near obsessive cross-hatching and, particularly, the hallucinatory sequences where poor Okazaki is overwhelmed with a bloodlust he can't understand. Perspective and anatomy warp and the fairly generic look of his pages is utterly transformed during these sequences, and alt-manga influences creep in and take over.

Don't just take my word for it if you're on the fence here, as both Cazz and Sean at All Star are big boosters of the book. Just ask them. For me though, Happiness functions brilliantly as a fresh coat of paint on the vampire mythos and as another superb example of just how much mileage one can get out of simple, but perfectly executed, origin stories. I'm keen to see what Oshimi has planned. 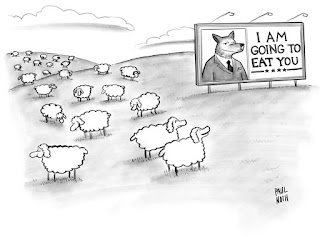 WEBCOMIC OF THE WEEK : HE TELLS IT LIKE IT IS
By Paul North

Political cartoons so rarely make an appearance in this space that I almost felt obligated to include one this week, particularly given the Orange Goblin's rise to power. Here's my fave from the wide pool of cartoons focussed on the election result, Paul North's "He Tells It Like It Is" from The New Yorker.

Ahhhh, Tac au Tac. Been a while since I linked to one of these. If you've never seen Tac au Tac before, basically a group of cartoonists come together and tag in and out on completing large murals, usually drawn with giant markers. The confidence of the artists is always off the charts - there is no room for error - and it's always pretty amazing to see the completed pictures come together.

This particular instalment from 1971 is perhaps the jolliest I've ever seen and arguably the most talent-stacked. The four gentlemen involved giggle their way though a series of improvised drawings with a tremendous sense of fun and spontaneity and some of the seemingly spur of the moment humorous artistic decisions are simply inspired. Andre Franquin (Spiro et Fantasio), Morris (Lucky Luke), Peyo (The Smurfs) and Jean Roba (Boule et Bill) are the assembled crew and, such is the ridiculous level of talent and stature brought together, it's odds on there's no way I'll type those four names in a sentence together ever again. Amazing stuff.

Cameron Ashley spends a lot of time writing comics and other things you'll likely never read. He's the chief editor and co-publisher of Crime Factory (www.thecrimefactory.com). You can reach him @cjamesashley on Twitter.
Posted by All Star Comics Team at 2:19 PM