ALL STAR RECOMMENDS FOR NOVEMBER 29TH 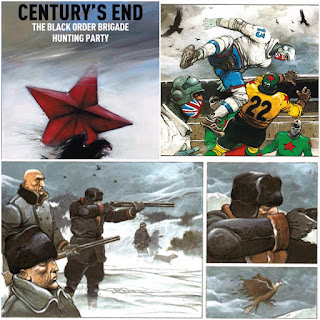 Hi there,
I have a bed-ridden wife demanding lemony drinks, so let's skip the preamble. Political thrills await. 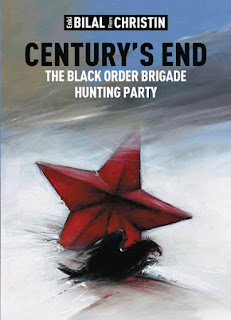 Thank you Titan Comics, thank you, thank you, thank you. Not only does the astounding imagination of Philippe Druillet have a home with the English publisher but so does that of another artistic titan of the BD scene - Enki Bilal. This year alone has seen the release of Bilal's iconic solo work, The Nikopol Trilogy, and mere weeks ago two classic tales by Bilal and writer Pierre Christin were bundled together and released as Century's End. Before we go any further, praise must be heaped on the publisher and editor Lizzie Kaye for not just bringing these projects back into English, but also for just how they have been presented. Both The Nikopol Trilogy and Century's End (and Druillet's Lone Sloane books) have been given what Titan is dubbing the Masterpiece format. Essentially the original French album size, these are generously proportioned books with heavy, thick hardcovers, showcasing the artwork as it was truly meant to be seen. Big thumbs up.

Century's End compiles both The Black Order Brigade and The Hunting Party, two dense political thrillers that highlight the dangers of utopian beliefs and severe ideological leanings whilst remaining exceedingly handsome artistic projects in the process. Bilal is naturally the draw for readers, but Christin also proves a formidable talent, providing scripts that are tense, expansive and clever enough not to hammer the reader over the head with the morals of his stories. The Black Order Brigade and The Hunting Party are also incredibly different reading experiences structurally. The sprawling, non-stop, continual motion of The Black Order Brigade (which feels a lot like Spielberg's excellent Munich but with a bunch of geezers in the lead) and the contained nature of The Hunting Party, which arguably could be staged as a play if a director were clever enough and only expands beyond the bounds of its main locale of a mansion and surrounding woodland in an opening expositional sequence set on a train and some frequent, wonderfully phantasmagorical flashback sequences.

In genre terms, The Black Order Brigade is something of a "geezer noir," a subgenre of crime fiction that places elderly protagonists in the lead role, carrying out the action to its inevitably grim and violent end. In Spain, an entire village is wiped out by a group of old, right wing terrorists who last saw action during the Spanish Civil War committing atrocities in Franco's name. In London, a balding, pipe smoking reporter names Prichard gets word of the massacre and finds some familiar names amongst those said to be responsible. Prichard, it turns out, was part of a rag tag group of left wing soldiers in the International Brigade who "fought for weeks and weeks against every last bastard" who has resurfaced. Frustrated at having his hands tied journalistically, Prichard reaches for the phone and begins dialling old comrades from across the globe, making an impassioned plea to pick up their firearms once more and, forty years after they last battled, take out The Black Order Brigade once and for all.

From the moment the group assembles, the story does not stop until the final pages, ripping through Europe as fast as these old codgers can manage. The initial romanticism begins to dwindle as the plot progresses, with the script cleverly highlighting the group's physical limitations in numerous sequences as well as seeding in doubt as to the righteousness of their actions and what, if any, meaning can be found in the death and destruction left in the wake of this essentially secret war.

I'm struggling to be even remotely objective about The Black Order Brigade. It simply ticks to many of my own personal favourite story elements - geezer noir, moral ambiguity, espionage, failure, paranoia, unexpected and quiet death, loud and violent death, car chases with tiny European cars -- it's all here and it all climaxes in a nihilistic and epic gun battle that would make Sam Peckinpah proud. There's even a few droll laughs packed in for good measure. Underneath all this pulpy gloss, however, is a real message about the dangers of fervent ideology (on both sides) and a real stab at heroes and martyrs which, as Cristin notes in an interview included at the rear of the book, "seem linked in a way that is as distressing as it is inexplicable." It's an incredible comic.

The Hunting Party slows things down, trading the romp across Europe for a contained tale of quietly building suspense. A group of Communist leaders meet at a remote mansion to do some hunting in the surrounding forest. It's the dead of winter and Bilal's cold, snowy landscapes match the icy expressions on his aging, stone-faced characters. Much of The Hunting Party is set up, introducing our hunters one by one and through flashback and nightmarishly strange imagery (allowing Bilal an escape from the rigidity of the story's structure and the similarity of the environment) we see the group in their youth, mingling with Lenin and fighting in the numerous conflicts that spanned the century. Cristin is quick to remind readers that he's once again not interested in black and white, listing the heroic accomplishments of the most prominent amongst the assembled, Vassili Alexandrovich Tchvtchenko, right before all the death and displacement he was responsible for a military figure.

There's no real clue as to what's happening for much of the story, even as tension slowly builds, there is a conflict coming, the reader can feel it during the hints dropped by characters and the bloody deaths of all sorts of animals they stumble upon in the woods. A bloody political manoeuvre is in the planning and it's clear that someone is on their last hunting trip. The final, unexpected punch provided by the creators is superb and the artistic discipline Bilal shows in bringing Cristin's dense tale of intrigue to life is admirable, tracking decades worth of war on his pages, alongside winter-dead trees and the stately but emotionally cold exterior of the mansion.

Hopefully, Titan isn’t done yet and we get more Bilal and Cristin in the coming year. Their Legends of Today trilogy, which precedes work found in Century's End, awaits Titan's Masterpiece format and hopefully there's enough interest to bring it into English. The Black Order Brigade and The Hunting Party are smart, sophisticated and beautifully created comics by a pair of creators who worked intensely, each challenged by the prodigious talents of the other to push for better and better work. Century's End is yet another reprint highlight in a year stuffed full of them and a reminder that there's quite possibly never been a better time to be reading comics. We are utterly spoiled for top shelf material. 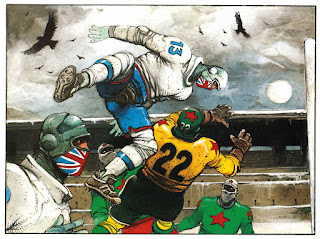 WEBCOMIC OF THE WEEK : UNTITLED PAINTING BY ENKI BILAL

There's something about this painting by Enki Bilal, coming to us once again via The Bristol Board, that perfectly encapsulates his pessimistic, grimy, post-industrial looking futures. Maybe it's the ordinariness of a soccer match, the crows circling overhead and the grey concrete of the backdrop that brings to mind the colour-stripped years of West Berlin juxtaposed with the garishly dressed players in their nationalistic uniforms, the main figure heading the ball into the net for England. Whatever it is, it's terrific and, seeing as I could not find a Bilal comic online, a fitting inclusion for this here space.

COMICS VIDEO OF THE WEEK : ENKI BILAL: THE DORMANT BEAST

Playing out almost like an avant-garde film is this brief look at the masterful Enki Bilal using practically anything he can his hands on to smear his visions onto the page. Schizophrenic and jarring editing lend this little film an air of unreality, perfect really for watching this craftsman at work amidst his piles of paints, brushes, pens and pastels. Pretentious? Sure, but essential viewing particularly for artists.

Cameron Ashley spends a lot of time writing comics and other things you'll likely never read. He's the chief editor and co-publisher of Crime Factory (www.thecrimefactory.com). You can reach him @cjamesashley on Twitter.
Posted by All Star Comics Team at 11:25 AM