ALL STAR RECOMMENDS FOR JANUARY 31ST 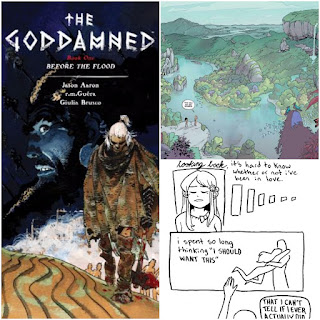 Biblical-pseudo-caveman comic book mayhem! Sex! Not having sex! Giant pieces of art! Yep, it's just another week in comics, the medium that can do anything. Onward.

Here's this week's Thing I Learned By Reading We Told You So: Comics as Art by Tom Spurgeon and Michael Dean:

Fantagraphics started its Eros imprint of porno comics in the early '90s because the company was a quarter of a million dollars in debt. Think about that. That's a staggering, frightening amount of money for a very small, independent publisher to be in the red for -- by today's inflated standards that's well over $400,000. I don't have too much Eros material on my shelves (there are real diamonds in the rough but much of the line, by the publisher's own admission, is pretty, pretty rough) however an Eros title that is within my immediate reach is Gilbert Hernandez's astonishing Birdland, a non-stop sex-fest culminating in an orgy so hormonally furious that it bends time, space and most interestingly, gender. Male characters become female, female become male, some become both, morphing into glamorous, generously fleshy posthumans caught in a libido-storm and sprouting all sorts of outrageous sexual organs as a result. Birdland is a brilliant, mind-bending espousal of gender fluidity for anyone of that mindset looking for something extremely racy to read. It also features some typically beautiful and deceptively simple cartooning by Hernandez, whose epic Poison River tale we'll be looking at in greater depth very soon in this column because I don't write about older stuff enough anymore.

Anyway, Eros turned out to be an inspired if controversial gambit, keeping Fanta afloat for a full decade (right up until the publisher snagged the Peanuts license) enabling them to continue publishing books they believed in for reasons of artistic merit and/or historical significance, often at a loss, which is a publishing philosophy that has been maintained to this day. Smut funded capital-L Literature and capital-A Art. There's a lesson in there somewhere... 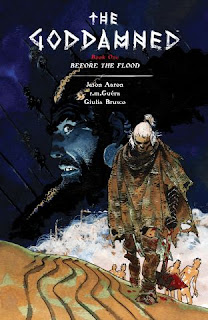 COMIC OF THE WEEK : THE GODDAMNED VOL.1: BEFORE THE FLOOD
By Jason Aaron, r.m Guera & Giulia Brusco
Published By Image Comics

2017's most gloriously, unrepentantly trashy example of macho smash-'em up comics, The Goddamned is The Bible by way of Robert E. Howard and Garth Ennis -- exactly the kind of thing I would have paid actual attention to in Sunday School.

The first child of Adam and Eve and thus the first child born ever, Cain, wanders a pre-Christian, pre-Biblical flood wasteland like a prehistoric Mad Max, engaging in bloody brawls, cursing a whole effing lot and seeking his own impossible death at the hands of a foe he's not yet encountered. As the "inventor of murder" this wasteland of a world is Cain's fault and it's a horrorshow of a place, one clearly primed and in great need of a giant, Godly cleansing.

Pound for pound the sweariest comic you'll encounter in some time, don't let the constant flow of expletives fool you -- this is a Jason Aaron-scripted comic; it is well-plotted and moves at a swiftly violent yet somehow graceful pace across various pre-apocalyptic landscapes. In his travels, Cain encounters monsters, weird Neanderthal things, what appear to be human/animal hybrids, giants and even another famous Biblical figure. It's kind of, sort of, like Fury Road. But on foot. With cavemen.

Is Aaron the most versatile writer working in the comics mainstream? It's entirely possible. It's almost hilarious that volume one of The Goddamned was released the same day as the latest collection of his work on Star Wars for Marvel. Aaron has said that The Goddamned has been in his head, percolating away for years, but what's interesting is that this most unhinged of books with its full frontal male nudity, frequent stabbings, full splash page crucifixions and constant brainings feels utterly spontaneous and I would not be surprised if it functions as some sort of release valve in his head for all the craziness he can't insert into his corporate work.

Aaron gives artist r.m Guera serious room to breathe - there are more splashes and double page spreads across this debut volume than in the entire run of the creative team's previous effort, one of my favourite crime comics ever, Scalped. Guera appears to relish the chance to go hog wild with his images. The landscapes are by turns horrific and beautiful, packed with intricate details of flora and fauna. Weird hybrid beasties are everywhere (the kangaroo/camel hybrid is perhaps my favourite right behind the abominable dog men). Unsurprisingly given the artist is of Serbian birth and resides in Spain, The Goddamned has the distinct look of some freshly-found European BD, worthy in fact of the French album format I so desperately want to catch on in The States. For Guera, too, this must be fun stuff to draw. Years of painstakingly illustrating Native American reservations and Casinos and a culture tragically on the skids must have been a grind. Here, however, there is fight scene after bonkers fight scene, largely silent battles punctuated mainly by Guera's own hand-drawn sound effects. His characters, barring Cain, are fittingly ugly, scarred, wounded creatures - harelips and burns and missing limbs abound. Guera shows great versatility also, not just with his apocalyptic carnage but particularly with a double page flashback splash to the Garden of Eden, that looks not unlike something Moebius might have stuck in his Gardens of Edena saga. 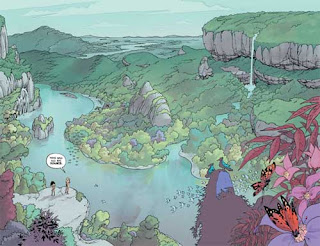 Colourist Giulia Brusco also deserves mention for her earthy work. This is a book largely set in mud and dust and dirt. Brusco takes to her brownish scenes and works logically and subtly, making moments of real colour count. Her dusk scenes are a highlight, as is the aforementioned Garden of Eden in which Guera wisely lets her take control. It's great work, complimenting Guera's lines perfectly.

Aaron himself has stated that this is a comic that will not be for everyone...and it's really not. However, if you want to get down in the muck, in the "shit ponds," with Cain, you'll likely find yourself dragged along in the character's increasingly brutal and bloody slipstream. Me, I'm just glad there's a pseudo-caveman book finally out, I could read a dozen a month. If that doesn't do it for you, The Goddamned is actually classically heroic at it's core, featuring a troubled hero who's done much wrong, looking for a way out and in the process actually finding a means to redemption. And if *that* doesn't do it for you, if you miss the gonzo SF of bygone '70s Heavy Metal, or can't wait for Jonny Ryan to finally finish up Prison Pit, or long for more Kentaro Miura Berserk or just miss the cheeky blasphemy of Ennis and Dillon's Preacher, The Goddamned could well fix what's ailing you. 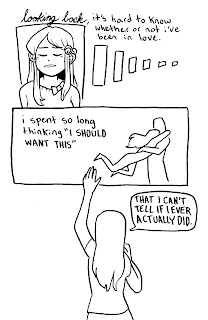 WEBCOMIC OF THE WEEK : HOW I LEARNED TO LOVE BEING AROMANTIC
By Kotaline Jones

This is a super interesting little webcomic. Kotaline Jones's comics memoir about her own struggles with being both asexual and aromantic, "How I Learned To Love Being Aromantic," will resonate with quite a few readers, I'd imagine both because of its nature as "diarised comics" and in its frank, honest discussion of its subject matter. I'm not going to say too much about the content, the one real talking point and question I have comes near the end of the strip and I'd rather not spoil it, but let's just say that Jones's cartooning is simple but crystal clear, wonderfully lo-fi and intimately personal, exactly as little strips of this sort ought to be. Brave stuff.

Blimey. Take a look at this. Back in 2010, Vagabond creator Takehiko Inoue produced an enormous piece of art for the Tokyo Museum of Modern Art. This video, filmed over several days, shows Inoue at work with ink brushes a big as something you'd paint your walls with, tiptoeing over his greywash as he goes.

Cameron Ashley spends a lot of time writing comics and other things you'll likely never read. He's the chief editor and co-publisher of Crime Factory (www.thecrimefactory.com). You can reach him @cjamesashley on Twitter.
Posted by All Star Comics Team at 3:30 PM