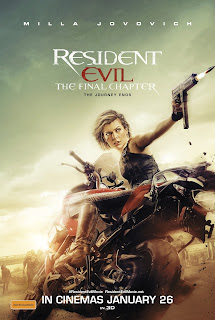 Based on Capcom’s hugely popular video game series Resident Evil comes the final instalment in the most successful video game film franchise ever, which has grossed over $1 billion worldwide to date.

Picking up immediately after the events in Resident Evil: Retribution, Alice (Milla Jovovich) is the only survivor of what was meant to be humanity’s final stand against the undead. Now, she must return to where the nightmare began – The Hive in Raccoon City, where the Umbrella Corporation is gathering its forces for a final strike against the only remaining survivors of the apocalypse. Only at the movies! January 26.

Thanks to those famished folks at Sony Pictures and RESIDENT EVIL THE FINAL CHAPTER in cinemas January 26th, we have 10 Double Passes to a Special Preview Screening at Hoyts Melbourne Central on Wednesday 25th January at 6.30pm to give away!

To go into the draw for your chance to win all you need to do is comment "I'd only survive a zombie outbreak with the help of, " and tag the person you could see yourself owing your life too and you'll be entered in the draw.

Terms and Conditions:
-Only entries made via the comments on the Facebook post will be included in the draw.
-Entries will be "liked" by All Star to notify the comment have been entered in the draw,
-All entries will go into the All Star Barrel and winners will be drawn at random.
-Entries close 5pm Sunday the 22nd of January and winners will be announced Monday the 23rd and notified soon after as to how to collect their tickets.

A huge thanks again to Sony Pictures and RESIDENT EVIL THE FINAL CHAPTER in cinemas January 26th,

Find out more at www.ResidentEvilMovie.net