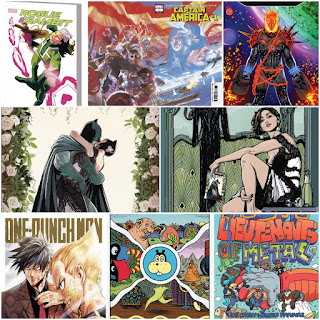 It might be as cold as Iceman's extremities out there at the moment, so why not warm those digits up with some feverish page turning of this week's latest reads!


Here comes the bride, the thieving and stealing bride! It's here, BATMAN #50, the Wedding of the Bat and the Cat. Will it go off without a hitch or will someone be left at the altar? Superstar Tom King brings a slew of artists extraordinaire to the ceremony, including Joelle Jones, Mitch Gerads, Becky Cloonan, Jose Luis Garcia-Lopez and many more!

Follow that up with Selina hitting the streets, working to take down her former criminal cohorts, and attracting the attention of the corruption within the GCPD! It's all a day in the life for our feline heroine in CATWOMAN #1, helmed by Eisner-nominated artist Joelle Jones!

The worlds of Sherlock Holmes and HP Lovecraft's Cthulu mythos merge into one with NEIL GAIMAN STUDY IN EMERALD HC. A consulting detective and his erstwhile companion embark upon another of their adventures, but this time the supernatural plays a hand. The real mystery is a far darker affair... who exactly are these crime-solving adventurers? If you thought Holmes and Watson: you thought wrong!

In the original series, a good man turned into an evil one, but what happened in the time between? Pick up JOE HILL THE CAPE FALLEN #1 to learn the sad story behind this character's transition period.

Acclaimed journalist and Black Panther scribe Ta-Nehisi Coates lends his talents to the brand new CAPTAIN AMERICA #1! Steve Rogers was the paragon of American patriotism since WWII, but following HYDRA's take over and his apparent complicity in their rule, he is now a fallen figure. But Cap has no time to wallow in self-pity, he must rise once again to face down the new threat of... the Power Elite!

Donny Cates strikes gold again with COSMIC GHOST RIDER #1 (OF 5)! Frank Castle was the Punisher, then he made deals with the Devil, Galactus and Thanos. What was the result of those deals? The COSMIC GHOST RIDER! Now he returns from the pages of "Thanos" in his own limited series, one you don't want to miss!

After a failed coup to supplant the X-Men as Marvel's premier series about outsiders, DEATH OF INHUMANS #1 (OF 5) is their reward! Get another hit of Donny Cates with the first issue of the mini series that proves you have to hit it big to stay big! It will be tragic but at least it will be written well, don't miss it!

The charming team of Squirrel Girl and Ms. Marvel return in MARVEL RISING SQUIRREL GIRL MS MARVEL #1! Together, they will enjoy video games, ones that can come to life. But that's no where near as fun as it sounds, as the duo must now save the world from these pixelated menaces!

An epic begins with STAR WARS #50! The Rebel fleet has been completed, it's existence a secret... but nothing stays a secret long from Darth Vader! Now the full fury of the Galactic Empire will strike back against the Rebellion as this series leads up to the the events of The Empire Strikes Back.

You've endured the tension for 5 weeks, endure it no more: the fates of Lois and Jonathan are revealed in MAN OF STEEL #6 (OF 6)! But that's not all, as Superman must fight to end the menace of Rogol Zaar and prevent the complete devastation of Metropolis!

Revisit the fantastic world of "The Dark Crystal" with JIM HENSON BENEATH DARK CRYSTAL #1 (OF 12). This new sequel takes us to the crowning of Ember Queen Mithra and what should be a new era of peace, however the Firelings dispute her claim to the throne... and they have evidence that one of their own should be the true heir!

The world of Jeff' Lemire's "Black Hammer" returns, this time we're going back to the future! The story of QUANTUM AGE FROM WORLD OF BLACK HAMMER #1 picks up 1000 years later, and now a young Martian must help reform the Quantum League to save the planet from an authoritarian regime!

Crashing Mary Shelley's monster weekend, Elvira now is lost in time, and has evil, nightmarish monsters after her as well! It doesn't get much wackier than here in
ELVIRA MISTRESS OF DARK #1!

The Mighty Krieg! Vandenborg Riot! Manowarrior! Steppenwulf! Each on their own a head-banging, rock star hero, but together, they are: the New Lieutenants of Metal! Check out their first adventure in NEW LIEUTENANTS OF METAL #1 (OF 4), and have comic book glory delivered unto you!

Anthropomorphic creatures abound in the world of UNNATURAL #1 (OF 12). One of them, Leslie, is a simple pig girl, who loves sushi, hates her job and really hates the totalitarian rule she lives under. But despite that, she still dreams of a better life for herself... can she achieve it?

After being missing from the shelves for many years, BATMAN THRILLKILLER TP NEW EDITION returns in a brand new printing! It's 1961, and Batgirl and Robin are a dynamic duo getting their thrill by thwarting crime. But things take a dark turn after the murder of Dick Grayson's parents, with Detective Bruce Wayne trying to solve the murder, as well as kill the thrill of Batgirl and Robin!

The fan-favourite mutant duo, Rogue and Gambit, have the great recent mini series collected within ROGUE & GAMBIT TP RING OF FIRE! When Kitty Pryde sends the pair undercover to rescue kidnapped mutants, they will both be drawn into a battle royale... and each other's crosshairs? If they escape with their lives, will their love for each other survive as well?

To accompany their successful album, Lights presents: SKIN AND EARTH TP! Enaia Jin is just trying to make her way through life, in a world full of romance and cults, gods and mortals, but she will soon be dragged down into a darker world. This work of art ties into the 14-track album of the same name by Lights, so complete your collection today!

It's three tales in one spectacular volume with TRANSFORMERS WRECKERS SAGA TP! From the events on the prison planet Garrus-9, to the lonelier escapades of the team's members, catch up on all the tales that built up the legend of the Wreckers!

Before the solo "Bumblebee" movie comes to theatres, find out what the vehicular rapscallion was getting up to in the Cold War with TRANSFORMERS BUMBLEBEE MOVIE PREQUEL #1! Teamed up with a British MI6 agent (who definitely isn't James Bond), the duo must find the traitor trying to sell out to the Soviets!

For inner arcade fighting game fan within us all comes FINAL STREET #1, an over-the-top, gender reversal comic book homage to classic fighter games, including Street Fighter, Double Dragon and Final Fight! Unleash your inner gamer spirit and add this to your collection!

If the state of the world isn't scary enough for you, test your mettle with the new horror anthology: HOUSE OF WAXWORK #1! With creepy, original characters such as the Die-Rechtor and the Decomposer, you'll get the spine-tingling chills you crave... just don't read it at night!

On the night of New York City's biggest storm, Elysia Puente gets a call from her estranged brother, Angel. When his call is suddenly cut off, Elysia will brave the storm to find out what happened to him. Check out SUBMERGED #1 (OF 4) to find out how she fares!

Enter a world where foxes and rabbits live... and fight! With magic, technology and art as their weapons, and it will be up to Bridgebelle, a seemingly ordinary rabbit, to help bring the war to an end in COTTONS SECRET OF WIND GN VOL 01 (OF 3)!

With books about bears becoming boyfriends, it was only a matter of time before giant fuzzy spiders could become best friends! This premise is delivered in GIANT SPIDER & ME POST APOCALYPTIC TALE GN VOL 02, where Nagi lives in a post-apocalyptic world, with a giant spider as her best friend. Expect one of the strangest friendships in all of fiction to fully flourish!

For the "Lone Wolf & Cub" connoisseur comes the LONE WOLF & CUB GALLERY ED HC. With highly detailed scans of the late Goseki Kajima's legendary artwork, this volume is the closest you will come to owning the original pages!

To celebrate the big screen return of two of Marvel's smallest heroes, see the work put into the pre-production of the film with concept artwork, production designs and other behind the scenes secrets with MARVELS ANT-MAN AND WASP ART OF MOVIE HC!

It's chaos at a martial arts tournament when the monster Goketsu starts turning contestants into monsters! It's up to previous tournament champ, Suiryu, and a hero with a special punch to stop him in ONE PUNCH MAN GN VOL 14!

If you desire some old-fashioned, cartoony fun, look no further than POOCHYTOWN HC WOODRING! Devoid of irony, topicality or cynicism, the perfect escape from real life is here!

Batman is back rocking the trunks... in statue form! The unique artistry of Becky Cloonan comes to life with BATMAN BLACK & WHITE STATUE BY BECKY CLOONAN! No collection is complete without it, get yours this week!

What a winning list. If there happens to be anything extra there you are keen on, just be sure to let us know before close Tuesday for us to stash it for you.
Until we see you next, have a great week, live life and read comics.

Posted by All Star Comics Team at 6:00 PM