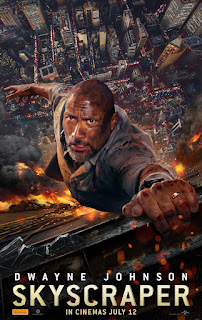 Global icon Dwayne Johnson leads the cast of Legendary’s Skyscraper as former FBI Hostage Rescue Team leader and U.S. war veteran Will Sawyer, who now assesses security for skyscrapers. On assignment in China he finds the tallest, safest building in the world suddenly ablaze, and he’s been framed for it. A wanted man on the run, Will must find those responsible, clear his name and somehow rescue his family who is trapped inside the building...above the fire line.

Thanks to those brave souls at Universal Pictures and Skyscraper
In Cinemas July 12th, we have 5 double passes to giveaway!

To go into the draw for your chance to win all you need to do is tell us,
"I'd jump between Skyscrapers if it meant I could spend more time ______ ." filling the blank with the tag of the person who you'd scale the highest peak for and you will be entered in the draw.

Terms and Conditions:
-Only entries made via the comments on the Facebook post will be included in the draw.
-All entries will go into the All Star Barrel and winners will be drawn at random.
-Entries close 5pm Sunday the 15th of July and winners will be announced Monday the 16th and notified soon after as to how to collect their tickets.

A huge thanks again to Universal Pictures and Skyscraper