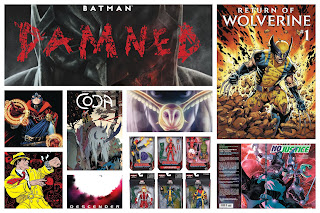 Woah! We thought last week was a winner but just wait until you run your peepers over this shipping list!

Returning from the alien Battleworld, Spider-Man came back with a new suit, one that was livelier than most. It took Peter on many adventures whilst he slept in the night, many of which were hinted at, but never shown. Now, Saladin Ahmed brings you one of those misadventures in AMAZING SPIDER-MAN ANNUAL #1, a book you webhead fans won't want to miss.

During the height of World War II, sickly Steve Rogers wanted to serve his country but was always turned away, until he joins a government experiment into arcane sorcery. The result? Steve is now the Soldier Supreme in INFINITY WARS SOLDIER SUPREME #1 (OF 2), the first "Infinity Warps" story, from Gerry Duggan and Adam Kubert.

Here it is, the book you've been waiting for (and endured many months of lead up to): it's the RETURN OF WOLVERINE #1 (OF 5)! Charles Soule and "Wolverine" veteran Steve McNiven finally bring Woverine back, and this time he's here to stay?

DC's Black Label imprint begins and what better way to kick it off than with BATMAN DAMNED #1 (OF 3), from the creative forces behind "Joker": Brian Azzarello and Lee Bermejo. The Joker is dead, and it looks like Batman is the one who finally did it. Or was it someone else entirely behind the deed? Batman can't remember, and the more he digs into the case, the stranger it gets...

The Esthers are a gang of young female thieves, and Olivia Twist is their latest recruit in OLIVIA TWIST #1. Things will get infinitely more complicated for her once she realises how much power and wealth she truly possesses by being part of the group, more than she could ever dream of... and with great power comes great responsibility, if it doesn't corrupt you first.

At long last, the yellow-clad detective returns to the comic books with DICK TRACY DEAD OR ALIVE #1 (OF 4), co-written by Michael and Lee Allred, with Rich Tommaso on art duties. Tracy has just made the largest collar of his career, and all it cost him was his job. Now he's moved to a new city to return to his passion for stamping out crime in all its hideous glory in this 21st century renewal of a comic strip legend.

Paranoia and hangovers abound in BURNOUTS #1, where an alien race is slowly invading the Earth. But all is not lost, for a group of teenagers have the ability to see these cosmic menaces when they're wasted! The entire fate of the Earth hangs with these slackers and... we're doomed, aren't we?

Jeff Lemire and Andrea Sorrentino's new series has sold out multiple printings of the first issue, so if you still haven't checked out one of 2018's hottest new series, then jump in now with GIDEON FALLS #1 DIRECTORS CUT. With the artwork presented in black and white, and Lemire's script included, even those of you with a regular copy won't want to pass this one up.

The finale of Dan Slott's record-breaking, decade long run on "Amazing Spider-Man" arrives with AMAZING SPIDER-MAN HC RED GOBLIN, and it's a doozy. Two of his deadliest foes, Norman Osborn and the Carnage symbiote, combine to form the most ultimate of evils: the Red Goblin! Could the biggest fight in Spidey's five and half decade long career be his last?

Bane's co-creators, Chuck Dixon and Graham Nolan, reunite to tell a new story in BANE CONQUEST TP. With his original gang members, Bird, Trogg and Zombie, in tow, Bane looks beyond Gotham and the Bat, and looks to conquer the world at large in this complete 12-issue maxiseries.

For those of you looking for a Mad Max apocalypse world in Lord of the Rings trappings, look no further than CODA TP VOL 01 DISCOVER NOW ED, from Simon Spurrier and Matias Bergara. A bard named Hum traverses the wilderness of a post-apocalyptic world with a foul-tempered unicorn, seeking to save the soul of his wife.

Dive further into the world of the fan-favourite, 1986 cult classic with JIM HENSON LABYRINTH SHORTCUTS HC. Featuring an array of short comic book stories from acclaimed creators such as Jonathan Case, Delilah S. Dawson, Katie Cook and more, get reacquainted with some of our favourite characters in new scenarios.

Spinning out of the events of "Dark Nights: Metal" comes Scott Snyder's
JUSTICE LEAGUE NO JUSTICE TP. Four energy beings are on their way to the planet Colu, and Brainiac has recruited an assortment of Earth's mightiest heroes and villains to stop them. Their incentive? If Colu is lost, then the Earth is next!

Make your Marvel Knights collection feel a little more fantastic with MARVEL KNIGHTS FANTASTIC FOUR BY MORRISON & LEE TP1234. Grant Morrison and Jae Lee push the team to the limits of their powers through the avatar of Doctor Doom. It's a modern classic, and comes packaged with Morrison's other Marvel Knights work starring Nick Fury.

Gustavo Borges enters the comic book scene with PETALS ORIGINAL GN HC, a silent graphic novel depicting the struggle of a family of foxes surviving a cold winter. When one of the young cubs goes out into the cold, he befriends a bird in a top hat. A heartwarming story perfect for anyone of all ages.

A legend in the world of comics takes on the old Arthurian legends meets James Bond as Frank Cho presents SKYBOURNE HC. Monsters, magic and the King's Sword, Excalibur, are all surviving into the 21st century. The evil Merlin is out to claim the sword, and only Thomas Skybourne can stand between him and the completion of his evil plan.

Before he put two voices in Deadpool's head, Daniel Way was documenting the adventures of the Venom symbiote sans Eddie Brock, and those issues are now available to you in VENOM BY DANIEL WAY TP COMPLETE COLLECTION NEW PTG. Without a host, the symbiote is starving, desperate for the adrenaline only other living organisms can provide, especially in one mutant called... Wolverine.

The final issues of "Venom" before Donny Cates' run are collected here in VENOM TP VOL 04 NATIVITY. With the symbiote's metabolic disorder cured, Eddie is able to become a lethal protector once more. But not all is forgotten or forgiven as Spider-Woman arrives on the scene to ensure justice is dealt out swiftly. Along with a revelation about the symbiote as well, these final issues are certainly delivering an explosive finale.

John Wick's first mission of destructive vengeance continues in JOHN WICK #3, from Greg Pak. Entering the world of assassins' in the Continental Hotel, Wick's presence threatens to upend the status quo, earning him a new enemy.

Springfield's inept police chief finds himself the star of the show in CHIEF WIGGUMS FELONIOUS FUNNIES #1, with art and words from local creator Dean Rankine. The streets of Springfield need a cleaning, and Wiggum's the man to clean it up, in his own hilarious fashion.

Renny was a once a big shot, now he's been taken down a few pegs in the criminal underworld. Looking to take his revenge on the cyberpunk Las Vegas, Renny will unleash his robot army in PATIENCE CONVICTION REVENGE #1, and either regain his position or bury the old order and build a new one.

A family comedy lies in the pages of DELINQUENT HOUSEWIFE GN VOL 01, as a high school student's sister-in-law moves into the family abode, and she comes bearing a big secret. Komugi is cute and nice, but after his older brother leaves on a business trip, Dai Komukai notices that his new family member can't cook or clean! From there, hilarity ensues...

Experience fashionable paranoia from the master of it, Shintaro Kago, with DEMENTIA 21 GN. Yukie Sakai is a health care worker, excited to help out the elderly, thrust into a series of surreal and strange adventures, pushing her wits and know-how to the limit. Who has wrought this upon her and what is their endgame? Check out this fascinating manga, but be sure to keep a wary mind.

Jeff Lemire and Dustin Nguyen's final issues of their hit creator-owned series are collected in DESCENDER TP VOL 06 WAR MACHINE. The hunt for Tim-21 has all factions converge on the ocean planet Mata, for a final showdown that neither Tim-21 or the readers will expect.

Before "Hilda" premieres on Netflix, check out HILDA & HIDDEN PEOPLE MOVIE TIE IN NOVEL from Stephen Davies and Seaerra Miller. Based off the first two episodes of the show, it's a great way to get a sneak preview, or a useful aid to help get kids into reading.

David Small's long-awaited HOME AFTER DARK GN tells a story of a young man's adolescence gone awry. Teenager Russell Pruitt's mother abandons him, leaving him to follow his father to a scenery change in California. But his troubles are only beginning, as he encounters more troubles at home and school, with no way out, or is there?

Two girls are whittling away their school days together in the only ways they know how in Tillie Walden's I LOVE THIS PART HC GN. Watching videos, sharing ear buds as they listen to their favourite beats and exchanging stories, they both discover the strength of their special relationship and how it helps get them through their lives, the good parts and the bad.

The concluding volume of Gengoroh Tagame's Eisner-winning story of a father, Yauchi, and his daughter, Kana, learning about his estranged brother arrives with MY BROTHERS HUSBAND GN VOL 02 (OF 2). Canadian Mike Flanagan was married to Yaichi's brother Ryoji, and stays with the family after Ryoji's death. During Mike's time, Yaichi learns more about what it means to be gay and how one is still human whilst being so. There's moments both heartwarming and heartbreaking, so be sure to have a box of tissues by your side for this one.

Ever wondered what it would be like to fly? SKYWARD TP VOL 01 MY LOW-G LIFE takes a fresh look at the concept, with humans able to fly after the gravity of Earth takes a considerable drop! However, such benefits can come with dire consequences. Definitely look before you leap into this series from Joe Henderson and Lee Garbett.

A pregnant woman is pursued by a supernatural entity, a bandaged hero surfaces in online videos and a fifteen year old makes a shocking discovery in his neighbour's yard. These three seemingly unrelated events forewarn of an impending zombie invasion in UNDEAD MESSIAH MANGA GN VOL 01.

Another classic collection of Carl Banks' work on Donald Duck awaits you in WALT DISNEY DONALD DUCK HC VOL 12 BLACK PEARLS TAB. Donald, Uncle Scrooge and the nephews embark upon adventures to find the titular black pearls, only to find themselves up against the fury of a volcano. If that wasn't enough, they soon wind up in an Amazonian rainforest too, and Donald ends up having to face Gladstone Gander in a race around the world. It's fun, it's zany and it's the magic that only Disney can provide.

Based of the incredible book from Kate O'Neill, create your own bond with a dragon with the TEA DRAGON SOCIETY CARD GAME. A great game for families and friends alike, and adorable to boot.

What a blast! If there is something else you spot that you are after, just be sure to let us know before closed Tuesday evening and we'll get it sorted for you.
Until we see you next, live life and read comics!