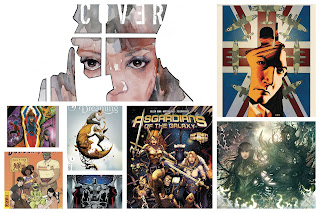 It's September, friends! Why not distract yourself a little how late in the year it already is and check out what's new for this week!

Gamora has fallen into villainy and it will take not just the Guardians of the Galaxy but the heroes of Asgard to stop her in ASGARDIANS OF THE GALAXY #1. From "Deadpool" veterans Cullen Bunn and Matteo Lolli, Marvel's latest team book features a wide arrange of characters, obscure and somewhat known. This is one you won't want to miss.

Fill that mysterious gap between "Thanos Wins" and "Infinity Wars Prime" with THANOS LEGACY #1. Donny Cates does it again, crafting the tale of how Thanos' journey back from the future leads to Prime!

Get your reinvigorated Vertigo collection started with BORDER TOWN #1. Racial tensions rise in the town of Devil's Fork, Arizona, after a crack in the interdimensional border allows monsters from Mexican folklore through to the real world. The terror is being blamed on the Mexicans across the earthly plane but they'll soon learn what's really going on.

With a new status quo formed in Sandman Universe #1, pick up where that issue left off with DREAMING #1. The kingdom of Dream has been abandoned by its king, now it's up to the citizens he left behind to protect the borders. But the senior storysmiths are troubled by invasive secrets, whilst a thief is stealing dreams to sell to the highest bidder. Can anyone restore peace to the Kingdom of Dream?

Still on the fence about whether to check out Brian Michael Bendis' creator-owned works? Then the JINXWORLD SAMPLER #1 is the book for you, this value-for-money item reprints the #1 issues of "Powers", "Scarlet" and "The United States of Murder, INC.", along with a bonus introductory story to the Jinxworld line from you-know-who. Take the first brave step towards the gritty world of Bendis with this sampler today!

The next chapter of Bendis and Oeming's "United States of Murder, INC." epic starts with UNITED STATES VS MURDER INC #1 (OF 6). The American government has caved into the the demands of the biggest crime families and gave them all a piece of the action. Now a war is brewing, between the good people of America and the criminal overlords with made man Valentine Gallo and his lover, hitwoman Jagger Rose trying to decide which side they're going to be on.

The worlds of comic book creators and spies mash together in COVER #1 (OF 6). When America's intelligence community realises that creators going around the world to promote their works would provide the perfect cover, being a part of the comic book world has never been more exciting. Another book from Bendis (where does he find the time?) with art from David Mack.

From legendary, best-selling author, Margaret Atwood, writer of "The Handmaiden's Tale", comes WAR BEARS #1 (OF 3), a story that traces the history of the Golden Age of Comics! Showing the career of Al Zurakowski, from his early days in Toronto to creating the smash hit heroine, Oursonette, during the peak of World War II and then how the continues rise of American comics following the war crushed his dreams. This is a must-have for you comic book historians and Golden Age fans alike.

Always being alluded to but never definitively shown, learn about 007's World War II days with JAMES BOND ORIGIN #1, from "Batman '66" writer, Jeff Parker. It's 1941, and James Bond is a student, eager for action, which arrives with the deadly Clydebank Blitz, the most destructive attack on Scotland by the Germans! Fighting for his life and coming out on the other side, Bond will start along the path that leads to his future in MI6.

A hilarious new, all-ages ongoing from Skottie Young debuts with BULLY WARS #1. Rufus has always been a bully, ever since kindergarten but he's about to learn how it feels to be on the receiving end when he enters high school. Teaming up with this two favourite geeks, Rufus will try to win the school's "Hunger Games"-esque Bully Wars, where the winner gets the ultimate prize: to be able to rule the school.

The Batman event of the year so big the New York Times had to spoil it, now comes to you in deluxe format with BATMAN CATWOMAN THE WEDDING ALBUM DELUXE ED HC. The lead-in issues and the wedding special itself comes packaged in a hardcover, along with Tom King's script for issue #44, retailer variant covers and a wealth of other bonus material.

Frank Miller's Dark Knight epic continues with DARK KNIGHT III THE MASTER RACE TP. Gotham is in a poor state of affair, with a void opened up in the wake of President Lex Luthor's downfall and the apparent death of Batman! Who can take back control and save the world from the dreaded Master Race?

Mike Mignola's "Hellboy" epic comes to its conclusion with HELLBOY OMNIBUS TP VOL 04 HELLBOY IN HELL. Cast into the depths of Hell itself, Hellboy will learn the secrets of his origin and find a new significance to his role as Beast of the Apocalypse. Be sure to pick this one up to complete your "Hellboy" library.

The start of local writer Tom Taylor's ongoing X-Men book starts being collected with X-MEN RED TP VOL 01 HATE MACHINE. Jean Grey has been resurrected once again, now she seeks to form her own team of X-Men, featuring Nightcrawler, Namor and the All-New Wolverine, to protect the dream left by her mentor, Professor X.

British superheroes of old form a new team in THE VIGILANT ONE SHOT. The evil forces of Von Hoffman and Dr. Mesmer have abducted Adam Eterno, and only the superhero team known as the Vigilant can save him. The new Rebellion-verse begins here.

Jason Lutes' uncompromising look at the fall of the Weimar Republic and the rise of the Nazi party through the eyes of the people in BERLIN HC COMPLETE EDITION. All 22 serialised issues are collected here in a single hardcover, the perfect book to catch you up on the epic, just in time for the release of Lutes' third volume.

Rick Remender's smash hit starring the alcholic Heath Huston concludes in FEAR AGENT FINAL ED TP VOL 03, the definitive collection. Heath is the final surviving member of the human race, and the target of the robotic hordes and their co-conspirators, before him lies his final chance at redemption. Will he succeed or will he die the failure he feared to become?

The FIX TP VOL 03 features Roy finally making a big break in his murder investigation, while Mac is out for justice. Don't miss some of the latest twists and turns in Nick Spencer and Steve Lieber's comic of crime and investigation.

Books truly are the mightiest force on earth in LYRIC MCKERRIGAN SECRET LIBRARIAN HC PICTURE BOOK. An evil genius sets his sights on the destruction of all books on Earth, and it's down to Lyric McKerrigan, Secret Librarian, and her trusty array of gadgets, diguises and books to stop him! A fun book for those of all ages, don't miss out.

Hayao Miyazaki has been entertaining billions of people all around the world for many decades, but get the inside look on how it's affected the world and those living in it with MIYAZAKIWORLD A LIFE IN ART HC. Author Susan Napier examines the themes that cross between his works, such as the empowerment of women, idyllic utopias and environmental nightmares and their relevance today. A perfect volume for fans of the great animator himself.

The latest issues of the Eisner-winning series are collected and presented in MONSTRESS TP VOL 03. Marjorie Liu and Sana Takeda, themselves Eisner winners for their work on the series, bring you Maika's latest challenge to save her life: making friends! Get up to date with series everyone is raving about.

Got an itching for Greek mythology? Then be sure to scratch it with MORTALS IMMORTALS GREEK MYTH HC, the perfect volume to get yourself started. Even if the myths are already familiar, the art of Charlotte Gastaut breathes new life into the old tales.

Medieval Europe meets medieval Japan in OTHERWORLDLY IZAKAYA NOBU TP VOL 01. The Japanese styled pub called "Nobu" exists in the town of Eiteriach. Whenever the patrons eat there, their troubles simply melt away in the otherworldliness of Nobu.

The outlaw Perdy loves action, whether it be robbing banks or in the sheets, but she's had to make do without out while locked away in Yuma prison. Now she's free once more in PERDY HC VOL 01, but the years have not been kind. She's back on the outside, she'll create havoc in this very odd, but very unique Western series from international star creator, Kickliy.

Take your duo of Optimus Prime and Soundwave pins and turn it into a trio with TRANSFORMERS BUMBLEBEE GLITTER FACE PIN. It's the perfect accessory to wear when the "Bumblebee" films hits cinemas soon.

From a demon in 1978 to a princess running away with a dragon, there's a love story for everyone in the pages of TWISTED ROMANCE TP. If that's not enough love for you, there's also a space captain capturing an infuriating pirate, and a photographer's assistant falling for someone way out of her league. Get yourself in on the romance today.

Hank and Molly Nonnar have decided to celebrate their 45th anniversary with the ultimate gift: a chance for a longer life. But their hopes are dashed when their duplicates are revealed to be disfigured, despite being physically and mentally superior. This is the world of UPGRADE SOUL GN, where the cost of long life is a pricey one indeed.

From writer Michel Demuth and artist Phillipe Druillet comes YRAGAEL URM THE MADMAN HC. If you're fan of the works of HP Lovecraft, and the adventures of the Silver Surfer, be sure to check this one out.

Ohhh, it's a sweet list! Stop something their you need us to stash, just let us know before close of Tuesday for us to get it sorted for you.
Until we see you next, have a great week, live life and read comics!

Posted by All Star Comics Team at 9:39 PM