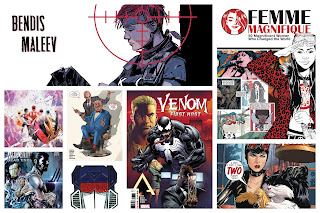 Fifth week blues got you down? How could it?! It's like a bye week, that still is full of great releases. Just take a glimpse below.

America's favourite past time becomes one baseball team's nightmare in SULLIVANS SLUGGERS HC. With flesh-eating monsters on the prowl, the ball players must fight for their lives!

Writer Jonathan Meeks is absolutely obsessed with the story of "Dracula" and sets on a journey to discover if there was any truth to the story in MAMMON HC. On his travels through the lavishly stylised 1920's, Meeks will discover that there was more truth to the tale than Stoker ever let on...

When Kei and Masaru die in a subway train, the last thing they expected was to become the lackeys of a black orb but that's exactly what happens in GANTZ OMNIBUS TP VOL 01. Armed with munitions and battle suits, with orders from the black orb, they'll fight aliens or die trying... again.

After a one-shot and more miniseries than you can swing an adamantium-laced claw at, comes HUNT FOR WOLVERINE DEAD ENDS #1! The hunt is over; Iron Man, Daredevil, Kitty Pryde and Sabretooth have all found what they were looking for... but what was it they found? Has Wolverine finally been found? If you're dying to know, don't miss it!

Before Spidey picked up the symbiote on Battleworld, there was the symbiote's First Host. That First Host has come to Earth in VENOM FIRST HOST #1 (OF 5), from superstar artist Mark Bagley and writer Mike Costa. Seeking the help of the symbiote once more, along with it's current host, Eddie Brock. Now, the symbiote and Brock must find a way to trust each other to save the cosmos.

Nick Fury, Director of S.H.I.E.L.D., was struggling in the Vietnam war, when he discovered a potential way to win in WEB OF VENOM VE NAM #1. The discovery of an ancient creature seems like a godsend but when that creature is the ancestor of the Venom symbiote, it was more likely sent by the Devil. It's another read from Marvel hotshot Donny Cates, and it's bound to become a one shot classic !

And a little more symbiote before you see his feature film, check out Venom's humble, villainous origins in the pages of AMAZING SPIDER-MAN EPIC COLLECTION TP VENOM. Peter and Mary Jane are still newly weds as Peter deals with the ghost of his black costume's past which leads to the triumphant return of the blue and red duds! All this, plus some of Todd MacFarlane's early Spidey work, there's no reason not to pick this one up.

The second wave of DC/Looney Tunes crossovers begin with CATWOMAN TWEETY & SYLVESTER SPECIAL #1. In his relentless pursuit of having Tweety for his dinner, Sylvester finds himself teaming up with none other than Catwoman. Tweety too finds a superpowered ally, leading to a power struggle the likes of which have never been seen before.

When Harley finds a crate washed up on the shore, what else is she gonna do other than crack it open for a peek? Within the crate, she finds the hairy, orange Gossamer, her new partner in mischief! All is fun and games, until a robot attack makes Harley suspicious that Mr. J may not appreciate her new friend. Check out the HARLEY QUINN GOSSAMER SPECIAL #1 to learn the surprising truth.

What started as a trip to the ACME offices in Gotham City for Daffy Duck soon becomes a nightmare in JOKER DAFFY DUCK SPECIAL #1. ACME is no more and the Joker has taken over, running his crime syndicate from the top floor, now poor Daffy has become the latest member of the Joker's crew! Will Daffy escape or will he become the Joker's right hand duck?

Down on his luck, Porky Pig takes up a job at Lexcorp in LEX LUTHOR PORKY PIG SPECIAL #1. Thankful for his new life, Porky becomes Luthor's staunchest defender but when Lex is called up before a Congressional Committee after a scandal, guess who'll be offered up as the sacrificial lamb, ahhh, pig?

Brian Michael Bendis reunites with the artist behind his "Daredevil" & "Infamous Iron Man" runs, Alex Maleev in SCARLET #1 (OF 5), the second release in his Jinxworld imprint. Scarlet is a woman whose life has torn apart by police corruption and now she's going to tear their lives apart in vengeance!

The first "Power Rangers" comic book event reaches its conclusion with MMPR SHATTERED GRID #1! Everything you've grown used to in the status quo is about to be shaken up for good.

The Sandifer family is having more than it's fair share of bad luck lately, suffering from delusions and other phenomena. Dylan Sandifer has set about finding the cause behind her family's dysfunctions and put an end to them in HOUSE AMOK #1, setting the stage for the strangest summer vacation in history.

Batman has had a lot of variations in his look over the past eighty years, but he has never been more adorable than he is in BATMAN A LOT OF LIL GOTHAM TP. This fun, all-ages book collects the whole twelve-issue run, with the cutest version of Gotham you'll ever see, thanks to artist Dustin Nguyen.

Jack Burton's final adventure unfolds in BIG TROUBLE IN LITTLE CHINA OLD MAN JACK TP VOL 01, with director of the original film, John Carpenter, on co-writing duties. Ching Dai has decided to forgo using minions to do his bidding, choosing instead to break down the barriers between Earth and infinite hells. It's up to Jack, and the mysterious voice coming through his radio to restore order.

From James Tynion IV comes EUGENIC TP, a story of dark aftermath in the vein of "Black Mirror". Humanity was ravaged by a virus but a scientist managed to create a cure. The world was saved, but what of the future? The cure has had an effect on the children born of the survivors, and the idea of "normal" will be forever changed.

Here comes the big one, and we mean that quite literally when we say that about FANTASTIC FOUR BEHOLD GALACTUS HC! This monster-sized hardcover, with stunning cover artwork from Alex Ross, packs a giant punch. With the artwork of Jack Kirby, John Buscema and John Byrne depicting the earliest threats from the Devourer of Planets and his herald, the Silver Surfer, enlarged, this is not a volume you should let pass you by.

The past and the present have seen a huge uprise in trailblazing women, and FEMME MAGNIFIQUE TP is sure to inspire the trailblazers of the future! Collecting three page mini-comics featuring inspirational women, from Kate Bush to Michelle Obama; written and illustrated by some of the industries greatest talents, such as Gail Simone and Jill Thompson, this is a book full of visionaries, made by visionaries.

When the wetlands between Riverdale and Gotham City are drained, it equals free college tuition for all Riverdale students. This should be good news to all, but a certain eco-terrorist sure doesn't see it that way, and sets about creating change in HARLEY & IVY MEET BETTY & VERONICA HC. Poison Ivy and Harley kidnap Veronica, the daughter of Riverdale's most important citizen, and her friend Betty, with large degrees of mayhem to follow.

The high fantasy adventure continues with JIM HENSON POWER OF DARK CRYSTAL HC VOL 03 (OF 4). Thurma has returned to her homeworld, having once more betrayed her ally, Kensho. But the two must settle their differences if the lands of Thra and Mithra are to peacefully co-exist.

Get to know the man who betrayed the Messiah with JUDAS TP. See Judas Iscariot's journey through his life, how he came to be a disciple and how his life came to a swift end. Crafted by WGA-nominated writer Jeff Loveness, this book is definitely worth your thirty pieces of silver.

If the big "Fourth World" omnibus was too weighty a tome, then be sure to experience Jack Kirby's magnum opus with NEW GODS BY JACK KIRBY TP! Featuring the ultimate battle for good and evil between New Genesis and Apokolips, this is truly the definitive Kirby story.

From writer Paul Jenkins and artist Wesley St. Claire comes BEYONDERS #1. A young boy fascinated with conspiracy theories finds out that they're real, starting a journey that would lead to the discovery of a secret, thousands of years old.

Skottie Young's colourful, satire of fantasy continues with I HATE FAIRYLAND TP VOL 04, but main character Gertrude has decided to pass on the spotlight in this volume. Instead, enjoy tales starring Larry, Duncan Dragon and other fun characters from Fairyland.

A fun book for kids, Dana Simpson's OZY AND MILLIE YR GN VOL 01 is a lovely story of a friendship between two foxes in middle school. Ozy is calm and quiet, whilst Millie is rowdy and rebellious, their differing personalities lead them into the most heartwarming on stories.

Drawing influences from American pop art, Korean K-pop, manga and internet culture, ROLY POLY HC is an unusual, but still fascinating, mix of storytelling and presentation. Phanta's brother is a top internet personality, so she embarks on a journey to top his achievement by becoming a top K-pop performer. It's psychedelia, drugs and pop music in book form!

David and Maria Laphram's tale of love and revenge in the Baltimore underbelly continues in STRAY BULLETS SUNSHINE & ROSES TP VOL 02. The Eisner-winning creative team weave an exciting heist story unlike any other you've seen before.

For the "Rick and Morty" fan in your life, be sure to get them the GALACTIC PLUSH RICK & MORTY PICKLE RICK 18IN PLUSH. If you yourself are the fan in your life, then definitely come in and pick up a Pickle Rick for yourself!

The next wave of Marvel Legends figurines arrive with SPIDER-MAN LEGENDS 6IN AF ASST 201802. Collect Cloak, Dagger, the House of M Spider-Man, the Scarlet Spider, Elektra and Doc Ock in all their 6 inch glory. Be sure not to miss a single one, for together, each figure comes with a part to assemble: SP//dr himself.

Young Han Solo and Lando Carissian, the Range Trooper, Rey, DJ and the terrifying Darth Vader grace you with their release with the SW BLACK SERIES 6IN AF ASST 201803. Recreate your favourite "Star Wars" moments, or create your own unique scenarios, the choice is yours!

If your shiny, new Optimus Prime pin is looking a little lonely, pick up a friend for him with TRANSFORMERS SOUNDWAVE GLITTER FACE PIN. Never get lost in a crowd again with Soundwave's sparkly detailing.

With the month of August coming to a close, the dawning of a new month signals the release of PREVIEWS #360 SEPTEMBER 2018. Jam-packed with future releases, be sure to take careful note of all the books you don't want to miss. Keep an eye out for our next Previews album coming soon.

All good for the week ahead, if you spotted something cool you need us to add, just let us know before close on Tuesday and your request will be our command.
Until we see you next have a great week, live life and read comics!

Posted by All Star Comics Team at 7:42 PM