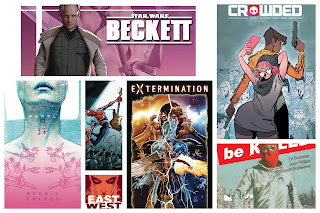 Of course it's another great week of books. Here is but a sample of this week's highlights.

Brian Michael Bendis and Michael Gaydos, the award-winning creators behind Jessica Jones, work together on a new creation in PEARL #1 (OF 6)! Pearl was born into a family part of the San Francisco Yakuza, but desires to leave the life behind to become a tattoo artist. However a special gift of hers is drawing her back into the violent life she is trying to escape. Don't miss this one, friends, for this is the first book in Bendis' new DC Jinxworld imprint too!

The chalk and cheese duo reunite in CABLE DEADPOOL ANNUAL #1! When Deadpool has to protect a client from time-hopping mercenaries, the regenerating degenerate will call on his old buddy to help keep the timeline in check.

Hobie Brown has been a Web Warrior since "Spider-Verse" but he also still has to protect the people of his own universe as Spider-Punk! See how his efforts fare in EDGE OF SPIDER-GEDDON #1 (OF 4), the lead-in series to the "Spider-Geddon" event of 2018.

Cyclops, Marvel Girl, Iceman, Beast and Angel were all displaced in time to save the X-Men from themselves. In EXTERMINATION #1 (OF 5), they now find themselves targeted for death. Now we must find out, can these five gifted youngsters complete the mission they were originally sent on: can the past save the future of the X-Men?

A prequel to prequel "Solo: A Star Wars Story", learn more about Han's short-term mentor, Beckett, with STAR WARS BECKETT #1! Get a taste of what made him such a renowned and threatening figure in the Galaxy as he is hunted by the dangerous and deadly marauders, Enfys Nest and see how he turns the tables in his own, inimitable style.

The epic "Sink Atlantis" continues with AQUAMAN #39! Picking up where Suicide Squad left off, watch as Arthur Curry, the King of Atlantis, attempts to defend his risen city from the onslaught reigned upon them from Amanda Waller's Task Force X, and prevent it from returning to the water at the bottom of the ocean!

If you thought the T-800 sent to terminate Sarah Connor was the only one to visit 1984, think again! Pick up a copy of TERMINATOR SECTOR WAR #1 (OF 4) to experience NYPD Officer Lucy Castro's tale of survival with a T-800 terminator on her tail.

In the future presented in CROWDED #1, every service can be obtained through apps! Reapr works as a crowdfunding app to arrange assassination hits, with the latest being placed on the regular, everyday Charlie Ellison. To defend her and figure out why people want her dead, Charlie used the Dfend app to hire Vita, the lowest-rated bodyguard available. Can they figure out the mystery or will Vita's rating sink lower?

The next addition to your Hellboy collection arrives with HELLBOY COMPLETE SHORT STORIES TP VOL 02. With short stories collected detailing events from the years 1961-1993, they all build towards the very first Hellboy story arc "Seed of Destruction".

Evil biker twins are stealing magic to ensure they maintain first position in the death race circuit and it's up to four unlikely heroes to stop them! The MYSTICONS GN VOL 01 unites the team for the first time and ties into the series by the same name that premiered on Nickelodeon in 2017.

Set before the seminal "Old Man Logan", OLD MAN HAWKEYE TP VOL 01 AN EYE FOR EYE. The villains have taken over the world and they've divided America up between them. In the middle of it all is Old Man Hawkeye, who's losing his eyesight but none of his accuracy!

The work of Jim Henson has inspired many creators, and so, they came together to produce the JIM HENSON DARK CRYSTAL ARTIST TRIBUTE HC! Featuring the work of many different creators, such as Jae Lee, David Petersen, Sana Takeda and many more, giving their unique spin on the Dark Crystal world!

To complement your crisp, new copy of Fantastic Four #1 from last week, check out THING AND HUMAN TORCH BY DAN SLOTT TP to see what madness Dan Slott was able to inject into the lives of just two members of the world famous quartet. With old pal Spider-Man along for the ride, is there any other reason as to why this book should be on your shelf?

See what misadventures occur when a down-on-his-luck cop teams up with a Lovecraftian horror in VINEGAR TEETH TP. Brick City is under threat, and while he's a luckless human, Artie Buckle is a pretty good cop, with the tentacled monster by his side, they will put a stop to the rising crime rate.

It's the future and humans have created AI, all for the purpose of serving humanity. But that all comes under threat in VOLITION #1, when a virus called "Rust" starts to infect the living machinery, now all hope lies in two unlikely robots: a construction bot and a caregiver! Can they find the cure or will humanity have to do hard labor once again?

Get reacquainted with Death and Babylon in EAST OF WEST TP VOL 08, the latest volume in the best-selling "East of West" series from acclaimed writer Jonathan Hickman!

The smash-hit, Eisner-nominated book from Ed Brubaker and Sean Phillips comes to its conclusion with KILL OR BE KILLED TP VOL 04! Dylan has committed himself to a mental institution, to escape the evils of the world. But all may be in vain as the evil appears to be infiltrating the institution. Don't miss this exciting finale!

Grunhilda the Witch has a secret! Under her grim, cruel exterior lies a small weakness: a small soft spot in her black heart! In LUNCH WITCH GN VOL 02 KNEE DEEP IN NICENESS, she does all she can to keep those feelings buried deep, but her ancestors and familiars are all digging away for the truth!

Poor Marjorie has a lot on her shoulders for a thirteen year-old. After her mother passed away and her father is stuck in a state of grief, she has to effectively run her family's laundry business, andh her lack of personal life makes her feel like a ghost. Another boy, Wendell, on the other hand, is a ghost, dependent on a white sheet to show his presence. Check out SHEETS GN for the one of the most unusual friendships in a most haunted landromat.

And there you have it. What's high on your want to read list this week? Spot something we need to put aside for you, just let us know before close on Tuesday and we'll get it sorted.
Until we see you next, have a great week, live life and read comics.

Posted by All Star Comics Team at 6:34 PM