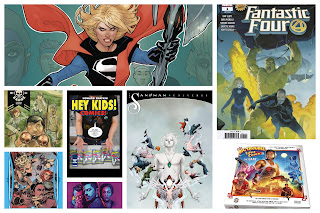 HEY EVERYONE! This week is super special, it's a family reunion and we can't wait!

They've been apart for years but now brace yourselves for the return of Marvel's First Family with FANTASTIC FOUR #1! Mr. Fantastic, the Invisible Woman, the Human Torch and the ever lovin', blue-eyed Thing are back, and just in time to bring back hope to the Marvel Universe with Dan Slott and Sara Pichelli at the helm.

The world of the Dreaming, artfully crafted by accalimed author Neil Gaiman is renewed in SANDMAN UNIVERSE #1! A rift has opened that leads beyond the Dreaming and a book from Luicen's library has gone missing, winding up in the hands of children in a plane that should not exist. The mysteries are only beginning, be sure to check this one shot out that sets up the four new books forming the Sandman Universe!

The team behind "Grass Kings", Matt Kindt & Tyler Jenkins, unite to bring you BLACK BADGE #1. The government runs covert operations using the most unlikely of agents: boy scouts! The most elite squad being the eponymous Black Badges.

Get yourself a crash course in the history of comics with HEY KIDS COMICS #1 thanks to the talents of Howard Chaykin! Some names have been changed but in the end, you could probably play a game matching the acts to the historical figures in the industry we all adore.

20 years in the making, after many spectacular games, the vision of Hideo Kojima and the art of Yoji Shinkawa are collected in ART OF METAL GEAR SOLID I-IV HC. These volumes perfectly compliment "The Art of Metal Gear Solid V", and with these being their first English printing, they will be a hot item!

The epic storyline that showed Spider-Man at his darkest, SPIDER-MAN KRAVENS LAST HUNT DELUXE EDITION HC is the ultimate package. Featuring the landmark story, it also features various bonus issues depicting scary, even terrifying, "What If?" stories, which will make you thankful the story went the way it did!


Atlantis has risen to the surface and it's up to the Suicide Squad to sink it once more! SUICIDE SQUAD #45 features part one of the "Sink Atlantis", which continues into Aquaman!

Following the destruction of Kandor and its Kryptonian citizens in "Man of Steel", Kara sets out to find out all she can about its murderer, Rogol Zaar! SUPERGIRL #21 sees the heroine cobble a ship together and use some Green Lantern intel to solve the mystery.

The planet Reptilon has found its sister planet... Earth! With water, plants and most importantly, seven billion pieces of meat, check out DINOSAUCERS #1 to see what happens when human meet humanoid dinosaur, in this retro 80's cartoon classic reborn.

Lebanese family, the Khouries, are living the American Dream! Having set up a successful business in vending machine sandwiches, it seems their life is set. In HOT LUNCH SPECIAL #1 from Aftershock, their business partners have come to collect on the debt the family owes, however, when your business partners are the Chicago Mob, they'll want more back than just a loan: they want blood!

Featuring a unique behind-the-scenes look at the critically-acclaimed TV series, the ART AND MAKING OF PREACHER HC is the perfect book for any fan. With cast and crew interviews, as well as production notes, get an in-depth experience you won't find anywhere else.

After an adventure gone awry in England, Delilah Dirk has decided to have her next one in Asia, where all seems more easy-going. The life of an adventurer is never easy-going, as she must team-up with her arch enemy to succeed in her latest archaelogical quest in DELILAH DIRK & PILLARS OF HER GN!

Take a humorous walk through comic creator Liz Prince's shoes in LOOK BACK & LAUGH TP. Featuring 365 comic strips, get a literal day-by-day look at her life through the year that was... 2016!

As the years go by, children grow up and move out into the world. LOVE & ROCKETS LIBRARY GILBERT GN VOL 07 THREE SIS follows three young women, Luba, Petra and Fritz, and the next phases of their lives in the heat and sun of LA.

In the latest OUTCAST BY KIRKMAN & AZACETA TP VOL 06, Kyle Barnes finds himself in Rome, West Virginia. A hotbed of demon activity, Kyle must rally his allies to take down the wave of demonic darkness.

The Rat Queens are home at last, with the spoils of their adventures in hand and the need to celebrate in RAT QUEENS TP VOL 05 COLOSSAL MAGIC NOTHING. But a new neighbour, a strange wizard with a penchant for making people disappear into thin air, threatens to crash the party!

From comics superstar Jeff Lemire comes ROUGHNECK TP, a story about a brother and a sister who must reunite to confront a family curse! Derek, the brother, is a washed out hockey player and his sister, Beth, is on the run from an abusive ex-boyfriend. Together, they run away into the woods to escape the hardships of their lives, but Beth's ex threatens to undo their new lives...

A limited edition collection of the "Thicker Than Blood" miniseries arrives with THICKER THAN BLOOD TP BISLEY PAINTED ED! Featuring a tragic tale of two brothers being caught up in the wrong place at the wrong time, with all manner of monsters after them, be sure to grab a copy while stocks last!

New adventures for Valieran and Laurelie await in the new graphic novel series beginning with VALERIAN AND LAURELINE GN VOL 01 SHINGOUZLOOZ INC! With a new creative team giving their unique spin on the Valierian universe each volume, this one involving our heroes trying to deal with a wide variety of galactic issues, with the most pressing one at the forefront: their information brokers have lost Earth in a card game!

The "Valerian" saga continues in VALERIAN COMPLETE COLLECTION HC VOL 05! Collecting books 13-15 of the series in one volume, our erstwhile heroes find themselves in many roles, from galactic spies to reluctant arms dealers, these are the adventures not to be missed!

The debut creator-owned series from acclaimed artist Esad Ribic, "VS" comes collected in VS TP VOL 01! The future of warfare has arrived and it is: a spectator sport! Like all sports, this one too must evolve, and top gladiator/soldier, Satta Flynn will find the new soldiers being imported are no pushovers.

For fans of the cult movie comes the cult board game: BIG TROUBLE IN LITTLE CHINA BOARD GAME! Take on the roles of Jack, Wang, Gracie and the rest of the crew to take down the evil demon, Lo Pan!

And there you have it. Another wonderful week of bookos. See something extra you like, let us know before close Tuesday and we'll get it sorted.
Until we see you next, have an excellent week, live life and read comics.