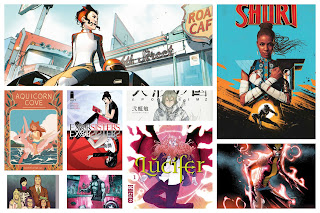 Hello, new week of comics. What treats do you have in store for us this time around?
The latest Infinity Warp merges the powerful Scarlet Witch with the eviscerating X-23 in INFINITY WARS WEAPON HEX #1 (OF 2). The Bens Acker and Blacker team together with Gerardo Sandoval to tell of a dark weapons program, mixing magic and science to produce the perfect specimen. Their 23rd attempt, known as Wanda, will be the most powerful subject yet.

The most horrific of Marvel alternate worlds returns in time for Halloween with MARVEL ZOMBIE #1, and W. Maxwell Prince, writer of the acclaimed Ice-Cream Man, delivers unto it a twist almost as twisted as his mind is! A zombie virus has taken over most of the Earth, and only a handful of heroes, such as Spider-Man, Daredevil and the Falcon, are left to defend the survivors. But with potential salvation almost at hand, can the heroes sacrifice their humanity to attain it?

The breakout character from Marvel Studios' Black Panther gets her own series in SHURI #1, from Afrofuturist author Nnedi Okorafor. With her brother missing in space, Wakanda looks to Shuri to take his place, but she prefers the comfort of her lab to the public position of Queen of Wakanda. Now Shuri must step up to maintain the peace of Wakanda, otherwise her nation will be vulnerable to attack.

Due to popular demand, Nadia van Dyne returns in a new series, beginning with UNSTOPPABLE WASP #1. With her team of girl scientists, and the original Wasp, Janet van Dyne to consult, Nadia will have to face off against AIM.

What if our world and the Marvel Universe met? What if a Norwegian black metal band came across Robbie Reyes? Sebastian Girner and Caspar Wijngaard skirt the legalities to bring you the answer in WHAT IF? GHOST RIDER #1. What role does Ghost Rider fill in the band, and can your mind handle the insanity?

Raven Darkholme, aka Mystique, takes centre stage in X-MEN BLACK MYSTIQUE #1. Full of kills, chills and thrills, experience a day in the life of Mystique. If that's not enough excitement for you, then added in for you enjoyment is part 3 of Zac Thompson's Apocalypse storyline, which is split up into the different X-Men Black issues.

The new Gaiman Sandman-verse continues here. On the hunt to find the mother of his abandoned son, Lucifer finds himself at the mercy of the dark forces seeking to imprison him. Whilst the main man is missing in LUCIFER #1, the world continues to move forwards: a car is crashed, two witches blind themselves and other mysterious events occur.

With the debut of a new animated series comes the beginning of a new comic book era for the TMNT with RISE OF THE TMNT #1. The Turtles are back, with a cool new look, awesome new weapons, but the same old foes you love to hate. Don't miss this new beginning.

Has your fiancee been dragged to hell? Made a pact with dark supernatural forces with dire consequences you didn't see coming? Then call upon Kate and Cate Harrow in EXORSISTERS #1, and discover how differently the two identical twins can help.

An action-packed, new series from Rick Remender and artist Bengal has its first issues collected in DEATH OR GLORY TP VOL 01. Glory was raised off the grid with a convoy of truckers, and grew up to be one of the last people fighting for freedom on the open road. With her father in desperate need of expensive surgery, Glory will have to pull off four dangerous, interstate heists, with every other criminal gunning after her.

Eisner-nominated writer, Lilah Sturges, and artist Polterink combine to bring you a new Lumberjanes original adventure with LUMBERJANES ORIGINAL GN VOL 01 INFERNAL COMPASS. The Janes are out on an orienteering activity, but a magical compass will soon divide their numbers. Can the Janes reunite and find their way back to camp?

With the alien invasion becoming a worldwide threat, the second Sharg War begins! In Greg Pak's MECH CADET YU TP VOL 02, the titular Mech Cadets are called into battle, except for first year recruits. However, that won't stop Stanford and co., who are training in secret for the inevitable battle.

Together again, the Runaways are reunited and are a family one more in RUNAWAYS BY RAINBOW ROWELL TP VOL 02 BEST FRIENDS FOREVER, But a family needs a guardian, and the only member of the team with her life together is currently in middle school. Will Molly be able to step up to guide her new family through times both hard and heavy? Be sure to grab this volume to find out.

Kenneth Rocafort takes the lead with writer Justin Jordan and DC's own co-publisher Dan DiDio with SIDEWAYS TP VOL 01 STEPPIN OUT, part of DC's New Age of Heroes. During the events of Dark Nights: Metal, high schooler Derek James fell through a rift and into the dark matter dimension. With his unexpected trip, Derek finds himself gifted with the power to slide through dimensions.

Bioware's game series is over for now, but keep delving into the world of Dragon Age with the new, fully canonical comic: DRAGON AGE DECEPTION #1. Olivia Pryde was an actress, now she's turned her abilities to crime as a con artist. With her eyes set on a wealthy young man, she'll soon learn there's more to him than meets the eye, and she may have bit off more than she can chew.


With the passing of the human race, the cats have claimed the Earth... or a spaceship at the very least, in CAPTAIN GINGER #1. The intrepid Captain Ginger leads his feline compatriots further into the final frontier and against a variety of hostile foes! With a back-up story from Grant Morrison, don't pass this one up.

From the acclaimed creator of BLAME!, Tsutomu Nihei, comes his new sci-fi epic: APOSIMZ GN VOL 01. A man-made celestial body, APOSIMZ is one of mankind's crowning achievements. But those who lost a war were forced from the comfortable interior and forced to live on the freezing external surface, and now face death on a daily basis. Pick up this volume to read of how they survive.

A brand new, fantastical adventure awaits you from the award-winning writer of The Tea Dragon Society, Katie O'Neill. That adventure is AQUICORN COVE HC, a fun, all-ages story about Lana and an injured, mythical being called an Aquicorn. With another storm prepared to ravage a small seaside town, can Lana work with the Aquicorn to save the town?

Webcomic cartoonist extraordinaire Dami Lee has her all-time favourite selection from her popular webcomic, As Per Usual, brought to print in BE EVERYTHING AT ONCE TP. Distilling her life, from growing up as a South Korean immigrant in Texas to finding her stride as an online cartoonist, this book provides the best insight in her career.

In a cyberpunk future, parkour has managed to become even more eXtreme, thanks to neurolinked helmets that enhance the thrills and the danger. Those who participate are known as Boneheads, and their first escapades are collected in BONEHEAD TP VOL 01, from Bryan Hill.

The team behind Old Man Logan's ongoing series, Jeff Lemire and Andrea Sorrentino, have the first issues of their smash-hit, creator-owned series collected in GIDEON FALLS TP VOL 01 BLACK BARN. A meditation on obsession, mental illness and faith, it tells the legend of the Black Barn, which mysteriously appears and disappears throughout history, with death and destruction always following it. With a TV adaptation on the horizon, check out the series here at the beginning.

The Earth has collapsed, and the survivors have gathered on a space station in "OPEN EARTH GN". Now humanity has thrived on the station, and for Rigo, she has forgotten the social norms and standards of California, and is exploring her own desires and polyamorous relationships in the vacuum of space.

For lovers of fake fortunes and mystical mumbo jumbo, grab yourself a MINI ZOLTAR HE SPEAKS KIT! With a whole smorgasbord of fantastic, far-fetched fates programmed in, you'll get a different fortune each time. If that's not enough for you, it also comes with 16 fortune cards so phony, you could call your mother with them. *ZING!*

There you go, folks. A great looking week. Let us know if there is something we need to hold for you, just be sure to do sure before close on Tuesday and we'll get it sorted for you.
Until we next see you, have a great week, live life and read comics!

Posted by All Star Comics Team at 4:10 PM