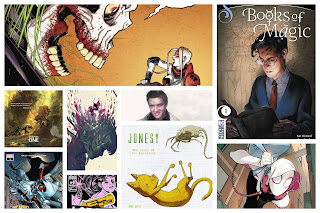 Welcome to another wonderful week of comics. Hope you are as keen as we are for this list of new reading material, just take a look at this list below!

Deadpool has conquered the comic book page and the silver screen and he's ready to fight for his top spot, going against the King of Wakanda himself in BLACK PANTHER VS DEADPOOL #1 (OF 5). With a beloved character from the Marvel Universe gets caught in the crossfire between Deadpool and the Wrecker, 'Pool will find the vibranium necessary to save their life. But the regenerating degenerate's... unconventional methods puts him in the sights of the Black Panther!

Moon Knight writer, Max Bemis, merges the Knight with Spider-Man in INFINITY WARS ARACHKNIGHT #1 (OF 2) to give you another delightfully weird Infinity Warps offering. Peter Parker was chosen as the Avatar of the Spider-Totem, but delivering the will of the master weaver on his will has shattered his mind, and lets his multiple personalities wreak their own brand of havoc.

Spider-Geddon is underway, and this event is so huge, it has no choice but to spill out into tie-in miniseries, beginning with SPIDER-GIRLS #1 (OF 3), from Jody Houser. Mayday Parker, Anya Corazon, and Annie May Parker team up to protect Mayday's brother from the inheritors, with Anya's knowledge of the Inheritors on their side, how does Annie May fit in to the group?

Come on, did you really think Marvel was done with Spider-Gwen? She's back and in her new ongoing book, starting with SPIDER-GWEN GHOST-SPIDER #1, which ties into the beginning of Spider-Geddon. Going about her usual business on Earth-65, Gwen Stacy is about to find out that her world is on the precipice of destruction.

Across history, Asgard stood victorious under King Odin, but WHAT IF Odin instead fell to the King of Giants on Jotenheim? What if Thor was ripped away from Asgard and made to live his life with the dreaded Frost Giants? Check out WHAT IF? THOR #1, from Ethan Sacks and Michele Bandini to learn the shocking answers.

As the saying goes, "Nothing can stop the Juggernaut"... but then, you haven't yet read X-MEN BLACK JUGGERNAUT #1! Robbie Thompson subverts your expectations and then some with the latest look at a day in the life of Cain Marko, whilst Zac Thompson delivers the fourth, penultimate part of X-Men Black: Apocalypse. With one part left to go after this, don't let is pass you by.

A skinny boy with jet black hair, glasses and magical powers? Nope, it's not Harry Potter, but rather Timothy Hunter in the return of BOOKS OF MAGIC #1, part of Neil Gaiman's Sandman Universe. For Tim, magic is great, but it doesn't help him in every situation, yet he'll need it to defend himself from cultists who fear that the power of magic will corrupt young Hunter into becoming an evil mage... and they're the good guys!

Marvel's Old Men are a dime a dozen, so now DC delivers their own take with OLD LADY HARLEY #1 (OF 5). Harley was called out of retirement to put down the crazed Gang of Harley's, but before she can return to her well-earned rest, she'll have to elude the Laughing Boys gang, who want to take her back to their boss. But is their boss really the Joker? This new book from Frank Tieri and Inaki Miranda will keep you guessing, whilst providing a healthy dose of dark comedy and action.

Christopher Emgard and Tomas Aira deliver a very different type of war comic with WHISPERING DARK #1. Equal parts Lovecraftian horror and Francis Ford Coppola's Apocalypse, a platoon of soldiers will fight for their lives after their helicopter crashes and strands them from home base.

Spencer is a man who never manages to finish anything in his life, so when he goes to see his father for a loan the last thing he expects is to fight for his life in MARS ATTACKS #1. The deadly, dangerous and deranged Martians are back for another crack at conquering the Earth, and Spencer and his father will have to do their best to avoid the crosshairs.

The Eisner award-winning Laphams, David and Maria, continue to bring you their classic, twisted brand of crime and romance comics with LODGER #1. Ricky Toledo was fifteen when a handsome drifter came into town, framing her father for the murder of her mother, amongst other gruesome serial killings. Now Ricky is eighteen, and she's going to hunt down the drifter and get her revenge, if she doesn't fall for his deadly charms first.

Still building towards the climactic 100th issue, TMNT MACROSERIES #2 MICHELANGELO takes a moment to focus on the troubles weighing on the orange-masked, wisecracking turtle. With his relationship with Splinter, his father, deteriorating to its core, can Michelangelo salvage it and make his peace before what might be his final battle?

Hugo-nominated writer Saladin Ahmed has his 5-issue miniseries starring the titular, hard-working, chain-smoking journalist collected in ABBOTT TP. Elena Abbott is at work investigating a series of grisly murders which the police have given up on, but she continues to look into, discovering that dark, occult forces are at work behind this spree. The same forces that took her husband away from her, and she wants revenge.

With a whole diverse range of Aliens comics out there, it can be hard to know which ones to start with, and which are any good. Dark Horse works to remedy this problem with ALIENS ESSENTIAL COMICS TP VOL 01, a new line to collect the best of the best comic storylines, with even Ripley herself joining in on the action. Begin your Aliens comic collection with this volume today.

The final issues that build up to the momentous wedding of the Bat and Cat are collected here in BATMAN TP VOL 07 THE WEDDING REBIRTH. Tom King puts the pair through the wringer, as Batman and Catwoman ponder if they should forgo their plans and elope, whilst the Joker kidnaps his old foe. But is it to talk Batman out of his matrimony, or just a good old fashioned murder attempt? Either way, you can't pass this volume up and get up to date with the acclaimed series.

The X-Men had just gotten used to the idea of a world without youngish man Logan, when evidence of his resurrection is revealed! Now a team of heroes, villains and all star creators unite for the HUNT FOR WOLVERINE HC. Which of the four teams will be the first to uncover the truth, and are any of them prepared for hidden revelation to come?

Brendan Fletcher and Karl Kerschl, fresh from their Gotham Academy creation, team up on a brand new story in ISOLA TP VOL 01. The Queen of Maar has been cursed, and her Captain of the Guard will do anything to reverse it, even if their only hope lies on the mythical island of Isola... an island of death!

The original, creator-owned series from the epic team of Brian Bendis and Alex Maleev is reprinted for your enjoyment in SCARLET TP BOOK 01, and a perfect way to fill in the time between releases of the new Jinxworld Scarlet series. Scarlet made her mark in comics by being the woman who would never back down, not in the face of great oppression or great evil, and find a way to win and instill revolution.

If that's still not enough Bendisy goodness for you, then also grab yourself UNITED STATES OF MURDER INC TP VOL 01 TRUTH. A comic set in a world where America relented to the pressures of organised crime and cut the Mafia onto one of their most precious resources: land. Valentine Gallo had just become a made man when he comes across the hitwoman Jagger Rose, who'll turn his whole world upside down.

A new series involving conspiracies, secret police and a dark, cyberpunk future debuts with DEAD KINGS #1 by Steve Orlando and Matthew Dow Smith. Sasha never knew his younger brother, but when he himself is made to disappear at the hand of the secret police, he'll come across his brother Gena and find himself drawn into a long running conflict.

The classic Image team of anti-heroes return, courtesy of Michel Fiffe, in BLOODSTRIKE BRUTALISTS TP. Telling both the origin of the team's leader, Cabbot, as well as their latest missions, this is the perfect volume to rekindle your old love of the 90s most extreme super teams.

The world-renowned King of Rock left behind an epic legacy, and Philippe Chanoinat, along with Fabrice Le Henaff, take up the daunting task to recount it in ELVIS HC. Telling the life story of Elvis Presley (a comic book fan himself), with photorealistic artwork almost looking like the real deal, this volume is the perfect gift for his fans.

Feeling devoid of cyberpunk in your life? Then pick up GHOST IN SHELL GLOBAL NEURAL NETWORK HC, which features four, brand new comic book stories, with collaborations from the original creator himself, Shirow Masamune, and some of the comic industries greatest talents, including Becky Cloonan, Max Gladstone and many more.

If you're a cat lover, then don't miss out on the adorable new book from Rory Lucey: JONESY NINE LIVES ON NOSTROMO HC. Jonesy was living the good life, purring around on the USCSS Nostromo and helping himself to all the cat food he could eat. But when his cryostasis nap is interrupted, he'll discover that the crew of the Nostromo has adopted a new pet... is Jonesy's life of quiet comfort about to end?

With a career spanning 20 successful years, Brandon Graham has built up quite the body of work, and he presents to you his very best and very quirkiest selections with ROYALBOILER BRANDON GRAHAM DRAWN OUT COLL TP. With artwork from his comics, such as Prophet and Multiple Warheads, as well art from animations, get the indepth look at one of the industry's favourite talents.

There are many mysteries out in our universe, but some of the greatest lay within us. Get yourself in the know about the one that's floating around inside your noggin with SCIENCE COMICS THE BRAIN SC GN. You'll join Fahama on her own quest to escape the clutches of a mad scientist and his zombie horde, and the only way by learning about the human brain!

As October comes to a close, the dawning of a new November brings us PREVIEWS #362 NOVEMBER 2018. Exploding with the lastest announcements for books, both single comics and collected trades, make sure you peruse it carefully, keeping your eyes peeled for your new must-haves. Also look out for the new month's Previews album, in case you can't land a copy of this enormous tome.

And there you have it. Another great week, let us know by close Tuesday if you spot something else you are after. Until we see you next, have a great week, live life and read comics!