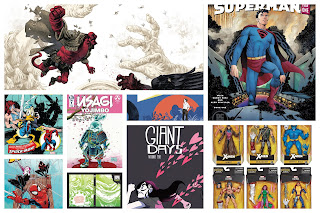 There it is! Plenty to see, plenty to get excited about, what titles are you keen for this week?!

Marvel continues their run of classic facsimile issues with Steve Gerber and Frank Brunner's HOWARD THE DUCK #1 FACSIMILE EDITION. The first issue of one of the most satirical comics of the 70s, Howard is thrust into the role of a Barbarian, and must face off against Pro-Rata, and his Cosmic Calculator to save an imprisoned Beverly Switzer. If you like your comics weird, with hilarious anthropomorphic animals, try this issue on for size. We bet it will fit like a glove.

After many decades in the field of comics, Frank Miller finally gets to tell the story of the Man of Steel he's been waiting to share, and it begins with SUPERMAN YEAR ONE #1 (OF 3), a prestige DC Black Label book, featuring art from John Romita, Jr. Often accused of hating Superman, Miller gets his chance to prove the haters wrong, as he starts the story where it always begins, with a planet on the brink of destruction. Experience the origin of Superman like never before!

Mike Mignola teams with fan-favourite artist, Duncan Fegredo, for a brand new Hellboy one-shot: HELLBOY AND BPRD BEAST OF VARGU. Within this one-shot are two new stories set in Romania, the first of which sees Hellboy visit a village that is plagued by a centuries-old curse and a monster, whilst the second involves an insidious puppet show and a demi-god's ill-fated dinner.

With the children of lower Upton disappearing, Giuseppe, the guardian of young Trout, is blamed and his turnip factory is burnt down by the vengeful villagers. That action-packed opening is only the beginning of Troy Nixey's TROUT HOLLOWEST KNOCK #1 (OF 4), and now Giuseppe and Trout are on the run. Who out there is willing to help two fugitives on the run? No-one who's even close to being a normal human being, that's who.

The story of John Carter sees a man from Earth go to Mars, whilst Mars Attacks sees alien Martians invade the Earth. But what if the two separate parties managed to cross paths? That's the question Jeff Parker and Dean Kotz try to answer with WARLORD OF MARS ATTACKS #1. The Martians has superior technology to conquer Earth, but the planetary conditions of Mars makes John a superhuman. Which of these will see the fight won?

Has it really been 35 years since our favourite heroes in a half-shell hit the comics scene? Indeed it has, and now you can experience what those first issues were like with Kevin Eastman and Peter Laird's TMNT 35TH ANNIVERSARY BOX SET. Inside, you'll find reprints of issues #1-4 of the original Mirage series, as well as the Raphael micro-series, all in their original print size to boot. Featuring the first appearances of the TMNT, Master Splinter, April O'Neil, the Shredder, Dr. Baxter Stockman, the Utroms and many more, this is something you can't pass up.

Having moved over from Dark Horse to his new home at IDW, the rabbit ronin known as Miyamoto Usagi gets a new ongoing series starting with USAGI YOJIMBO #1, written and drawn by his creator, Stan Sakai. The beginning of a three-issue arc, Usagi is drawn into a drama featuring puppets, where the players involved are not what they seem.

Best friends Daisy, Esther and Susan are back for their final year of university in John Allison and Max Sarin's GIANT DAYS TP VOL 10. Despite almost being seasoned veterans of the college, nothing starts off easy for the trio, as they search for new accommodation, attempt to avoid grievous injury and deal with the looming terror of the incoming adult world. The end is nigh, so be sure to pick up this volume to see the acclaimed series through to its nearing finale.

In the penultimate volume of Kengo Hanazawa's popular zombie survival manga series, I AM A HERO OMNIBUS TP VOL 10, the action starts in Barcelona, where someone observes enough to finally figure out the mystery behind the ZQN infestation. Then, back in Japan, Hideo and Hiromi continue their journey to Tokyo, with a new ally, and a new revelation that brings them closer together.

With the launch of the Sandman Universe line, the Lord of the Underworld, Lucifer, got himself a brand new ongoing series, with the first issue collected together to bring you LUCIFER TP VOL 01 THE INFERNAL COMEDY, from a group of creators featuring Dan Watters, Kat Howard, Bilquis Evely, Tom Fowler and many more. In a small boarding house sits an old, blind man, unable to leave his prison. Is this the fate that has fallen Lucifer?

Paul Pope's modern classic work of cyberpunk sci-fi gets a new printing from the good people of Image to celebrate it's 20th anniversary with HEAVY LIQUID TP. In the future, New York City has become a huge, sci-fi metropolis, and the streets are filled with people and drugs, especially once called heavy liquid. One particular user, known as S, is after the perfect person to make a sculpture out of the drug, and that will draw him into a mystery unlike any other.


A brand new series from Fred Van Lente and Renato Guedes debuts with PSI-LORDS #1, and the future of the Valiant Universe will never be the same afterwards. Four astronauts that launched into space find themselves prisoners in another world, with no memory as to how they got there and no idea how to escape. What is the connection these four share with the Psi-Lords?

Two animal activists are about to get a lot more than they were expecting in their latest rescue mission in LAB RAIDER #1 (OF 4), from Matt Miner and Creees Lee. Prepared to rescue animals from illegal experiments in a black market lab, the duo aren't prepared for what they do find: animals undergoing genetic experiments as part of a shady military operation. The animals are now monsters, and once their cages are opens, the animal rescuers are the ones who'll need rescuing.

Even superheroes aren't immune to corruption if the stakes are high enough is what you'll learn in Jim Krueger and Well-Bee's NO ONES #1. The Bastions are a group of respected superheroes, adored by the world they protect. So when they accidentally kill a man, they'll do anything and everything to protect their reputation, no matter how low or how criminal, which will cost them everything they try to hold on to.

A pioneer in modern day architecture, Eileen Gray's contributions to the field are often eclipsed by the men whom she collaborated with, especially on her dynamic E-1027 villa. But now, Charlotte Malterre-Barthes and Zosia Dzierzawska right that wrong with EILEEN GRAY HOUSE UNDER THE SUN GN, which gives the in-depth biography about the queer, Irish designer the world deserves.

The perfect Spider-Man book for anyone of all ages finally hits the shelves, with Delilah Dawson and Fico Ossio's MARVEL ACTION SPIDER-MAN TP BOOK 01 NEW BEGINNING. Peter Parker has been fighting against swathes of foes for a while now, and with high school exams coming up, he needs the time to study, but New York City still needs a Spider-Man. Thankfully, NYC is about to get a double-special, as Peter's new friends, Miles Morales and Gwen Stacy both work to cover the original Spidey. If you're a fan of the Into the Spider-Verse film, definitely give this one a look.

Lorraine Cink, from Marvel's YouTube channel, and Alice Zhang take you through the stories and influence the super-powered women of Marvel have on the world with MARVEL POWERS OF A GIRL HC. Covering 65 badass super-heroines, from Captain Marvel, Ms. Marvel and Black Widow to Spider-Gwen, Valkyrie and Riri Williams, plus many more, get the inside look at how Marvel is creating powerful characters to inspire women around the globe.

Following the end of Cullen Bunn and Brian Hurtt's The Sixth Gun, the Wild West world of the story was irrevocably changed, but it left plenty of room for more stories to be told. Now, the two writers, along with Carlos and AC Zamudio on art, begin one of those new stories with SHADOW ROADS TP VOL 01. The Crossroads is a doorway between universes, two beings, almost deities, bring together a band of Wild West citizens to embark on a quest to fight against the monsters that pass through the Crossroads and plan to destroy all of creation.

One of the lastest waves of Marvel Legends Build-a-Figure sets hits the store with CAPTAIN MARVEL LEGENDS 6IN AF ASST 201901. Featuring two versions of Carol Danvers as Captain Marvel, Nick Fury and the Skrull, Talos, from the new Captain Marvel movie, as well as Grey Gargoyle and Genis Vell from the comics, you'll want to collect them all. If the characters themselves aren't enough incentive, then maybe collecting all the pieces needed to build the Kree Sentry will sweeten the deal?

But that's not all, folks, for we also have another set of Marvel Legends Build-a-Figures, with the X-MEN LEGENDS 6IN AF ASST 201901. This set comes with Beast, Gambit, Blink, Forge, Skullbuster and Wolverine as Weapon X, along with the pieces you'll need to put together the mutant, Caliban. So don't just pick up another Wolverine for your collection, try to collect them all.

And there you go. Let us know if you spot anything extra, just make sure to do so before close Tuesday. So until we see you next, have a great week, live life and read comics.

Posted by All Star Comics Team at 7:29 PM