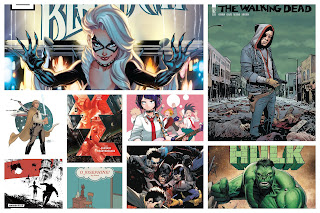 Wow, only days into Winter and already the chill is setting in. That said it's always warm and toasty when your got comics around, so why not check out the latest from this coming week.

At last, forty years after her debut, Felicia Hardy, the Black Cat, is the star of her very first ongoing series with Jed MacKay and Travel Foreman's BLACK CAT #1. Spinning out of the pages of Nick Spencer's current Amazing Spider-Man run, Black Cat's recent actions have now made her an enemy of New York's Thieves Guild, and of their boss Odessa Drake. Find out how Felicia will make fools of them all with heists and edge-of-your-seat action.

Peter David received universal acclaim for his 12 year run writing the Incredible Hulk, and now he reunites with one of his artistic collaborators from that era, Dale Keown, to bring you the INCREDIBLE HULK LAST CALL #1 one-shot. Bruce Banner has become tired of being the Hulk, exhausted of existence in general, but maybe a fight against someone who can stand toe-to-toe with the Hulk is just what he needs to snap out of it. Good thing such a foe isn't at all far away.

Greg Pak and Chris Sprouse return with another issue of Star Wars: Age of Rebellion, and this stars none of other than the greatest hero of the galaxy: Luke Skywalker! Set just after the Empire Strikes Back, in STAR WARS AOR LUKE SKYWALKER #1 Luke is reeling from the truth that his father, Anakin Skywalker, and Darth Vader are one and the same. Amidst preparing himself for their inevitable second clash, a rebel general's mistake creates trouble that only a Jedi Knight can resolve. All that, and a guest appearance from the Emperor too.

In the latest installment of Robert Kirkman's smash-hit story set in the midst of a zombie apocalypse could stand to have it's biggest issue to date. After the events of the previous issue it seems like there might be some MAJOR changes for WALKING DEAD #192. Also Carl Grimes takes centre stage. Carl is fighting for the established Commonwealth, but who exactly is it that he's supposed to be fighting against?

And while talking zombies, following Darkseid's corruption of the Anti-Life equation, how quickly will the Earth and the rest of the universe fall in Melbourne writer Tom Taylor and Trevor Hairsine's DCEASED #2 (OF 6)? Nobody can stand against the destructive power of the techno-organic virus and millions are dying by the minute. Is there anything the Justice League can do to save everyone? Or are they just the next victims in line?

Sean Lewis and Hayden Sherman presents a corporate take-over like never before in THUMBS #1 (OF 5). Through a social media app, MOM, the creator of it has built an army used to overthrow the government. One of those social media soldiers is Charley "Thumbs" Fellows, and he's in middle of the bloody uprising, spurred into action all thanks to MOM. Can a government really be overthrown in such a way? Are all these soldiers truly just slaves to social media?

With the latest roster of the Avengers settled at last, Jason Aaron throws everything he's got at them, including an army of vampires in AVENGERS BY JASON AARON TP VOL 03 WAR OF VAMPIRE, featuring art from David Marquez and Andrea Sorrentino. With a space on the team open while Doctor Strange is away, there's no-one better equipped to join the Avengers in the fight against the Shadow Colonel and his vampiric forces than Blade. But will Blade be enough to turn the tides in their favour? Or will the Colonel replace Dracula as King of the Vampires?


After producing many different genres of comic book story-telling, Humanoids finally gets into the superhero game with IGNITED #1, from Mark Waid, Kwanza Osajyefo and Philippe Briones. In the shadow of an horrific attack one year previously, there is no excitement in the students or staff of Phoenix Academy High on their first day of the new school year. Many friends were lost in the tragedy, but some of the survivors have found that they have changed; they have Ignited! Now they must get to grips with their supernatural powers, lest they cause the next tragic event.

From Elaine Tipping comes PRINCESS REVOLUTION #1, the beginning of the story of Princess Ceylse, who has awoken from a dream that showed her betrothed, Prince Eten, kidnapped by an evil queen. Sadly, that dream comes to pass, and now Ceylse is on a quest to rescue the prince from his abductor, and teams up with two other princesses, Linne and Hana, who are on a similar quest themselves. If you enjoy this issue, be on the lookout for the collected edition in August, that completes the story.

Aboard a starship run by an entirely feline complement, the intrepid Captain Ginger guides his crew where no cat has gone before in Stuart Moore and June Brigman's CAPTAIN GINGER TP VOL 01. The universe is a hostile place, out to get the good captain and those who serve under him, so it is he who must stand between those who are out to get them and his team in this completely collected miniseries, which might be worth checking out if you're after something quirky and new.

Get ready for the most epic prison escape in comic book history with Warren Ellis and Jason Howard's CEMETERY BEACH TP. A professional pathfinder has broken out of his torture cell, and finds a marathon of an extraction scenario before him. For that torture cell was built on a secret, century-old, off-world colony, with generations of lunatics dominating the population. Luckily, the pathfinder isn't alone, but his ally is a disaffected young murderess, who may be more dangerous on her own than the colony in its entirety.

Hot off his Wicked and Divine work, Keiron Gillen's latest ongoing series begins with DIE TP VOL 01 FANTASY HEARTBREAKER, and he's got the artist supreme, Stephanie Hans, working with him on her first ongoing series. A group of teenage role-players accidentally unleashed a dark evil through their game, and only barely managed to contain the menace they had let loose upon the world. Now the evil they thought they had sealed away has come back, and with all the players now in their 40's, will they be able to recreate their past success?

A compilation of four short stories lie in wait for you in JASON O JOSEPHINE HC, from the whimsical creator, known only as Jason. All told with his unique style and wit, Jason will encounter sheep in the green hills of Ireland; retell the life story of Leonard Cohen, but with Jason's own version of it; take a look at a stakeout being performed by a pair of private detectives, and, finally, show a story of love between Napoleon and the titular Josephine Baker. If you want something to make you feel happy during this dreary weather, this is the book for you.

For teenaged girls, puberty is already a hard enough time, but when it also causes you to turn into a flesh-craving wildcat, it just makes everything a whole lot harder. That's where 12 year-old Maude finds herself in Chelsea Cain and Kate Niemczyk's MAN-EATERS TP VOL 02, and that's not the only thing on Maude's mind. She also has a detective dad that thinks she's a killer, a mum who's hiding a secret, a unicorn hiding under her bed, and a plan to overthrow the patriarchy.

It's never easy to leave your friends behind, but for Tyler, who has just moved to a new home with his family, he keeps up contact with his friends in the world of the video game, Minecraft. In Sfe Monster and Sarah Graley's MINECRAFT TP VOL 01, see Tyler, along with friends Evan, Candace, Tobi and Grace, partake in adventures that keep their bond of friendship aflame, despite the distance that divides them.

Following the tragedy that concluded last volume, the students of Class 1-A might have a chance at forgetting their troubles as they prepare for the culture festival in Kouhei Horikoshi's MY HERO ACADEMIA GN VOL 19. Some students plan for success, others are following their own agenda, and Midoriya, our beloved little Deku, is hard at training with All-Might. But even Midoriya still has a lesson or two to learn, as an encounter with the failed hero, Gentle Criminal, will show him.

Trina Robbins brings new life to Tanith Lee's timeless sci-fi, romance novel, with her own graphic novel adaptation, SILVER METAL LOVER GN. Set in the far future, a young girl falls in love with a robot, which forces her to reconcile her hatred of the idea of romance with a robot with her very own feelings. The graphic novel was first released in 1985 and has never been reprinted since, so this is your best chance to read one of the best love stories you've never heard about.

A nice way to start the month. Spot something you are keen on, just let us know before close on Tuesday and we get it sorted for you.
So until we see you next, have a great week, live life and read comics.