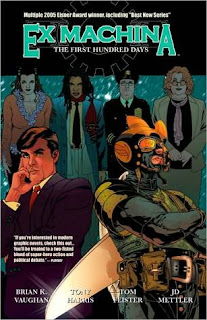 As the year motors on we are proud to introduce you to our next ALL STAR LEGEND. The sci-fi/political series from the brain of Brian K. Vaughan and artistic talents of Tony Harris, EX MACHINA Volume 1.

Ex Machina centres around the story of Mitchell Hundred and his rise as the world's first masked vigilante and later, superpowered Mayor of New York City. The setting is New York City post September 11th and the arena of State politics has never looked so good. The book at first glance could be described as West Wing meets The Rocketeer but runs with a much deeper thread into the origins of Hundred's abilities and what it takes to be "hero" in the modern world.

As always Vaughan (best known for his work on Y The Last Man) is in fine form with the writing on this book. Mixing the world of superheroes and politics is no simple task but Vaughan seems to handles it with class addressing current issues without ever seeming to take sides. All the while the writer never loses sight that this is also a story of a man with the abiltity to talk to and command machines while touching on the mystery of where these powers came from.

Perhaps key to this series' appeal though is Tony Harris' art. His excellent photo realistic images bring a beautiful and at many times, brutal humanity to these pages that the series demands. For the most part the story involves everyday people and the art reflects that with great style.

This LEGEND was inspired by the fact March sees the release of Vaughan's new ongoing series f rom Image, SAGA. The hype behind SAGA is growing daily with promises of a story that mixes Star Wars and Game Of Thrones. We couldn't think of a better way to compliment SAGA's release than showcasing another one of Vaughan's epic's in EX MACHINA.

If Ex Machina is too your liking, then you might want to also check out some of these other titles:
Y The Last Man (Vertigo)
Pride Of Baghad (Vertigo)
Starman (DC)
Runaways (Marvel)
As always, the ALL STAR LEGEND will be available for 30 days (or until stock sells out) at the discounted price. As this will be a limited stock promotion there is strictly "no holds" on the legend,  first in, best read! No further discount applies to the book as it's a pretty good chance it will already be cheaper than the US cover price! The discount also only applies to the volume listed, not the entire series of trades.

If you have any questions, you know where to ask them. You can start to buy the Legend from this Thursday the 1st of March.

All Star Legends. The legendary titles of the highest recommendation.
Posted by All Star Comics Team at 5:55 PM