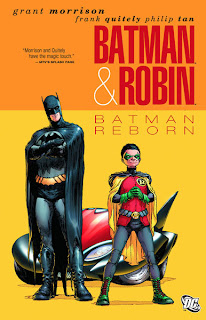 With the release of the Dark Knight Rises just around the corner we thought it was the perfect time to introduce/reacquaint you with one of the best modern takes the dynamic duo, Grant Morrison's BATMAN & ROBIN Volume 1.

This series reads as both a jump on point for new readers or the start of the second act to Morrison's epic re-envisioning of Bruce Wayne. So much so that it's not even Bruce under the cowl and a different Robin that who you'd expect.

Morrison's writing on Dick Grayson's taking up the mantle in Bruce's absence is a refreshing change. Thanks to Morrison, Grayson usually a far lighter character is shown with the weight of duty and responsibility he is thrust into from the first pages of this story. Couple that with the introduction of Damien as the new volatile Robin, we almost have a reverse Batman/ Robin partnership. If that enticing team dynamic wasn't enough, we are treated to some of the most disturbing new Batman rogues we have seen in years.

The art duties are split between Frank Quitely, Philip Tan and Jonathan Glapion, all of which are in fine form. Throughout the action scenes we really get a sense of Dick's acrobatic skills, differentiating the character from his more well known predecessor. The level of detail in this is second to none and all adds to the excitement of having a new Batman and Robin defending Gotham together. 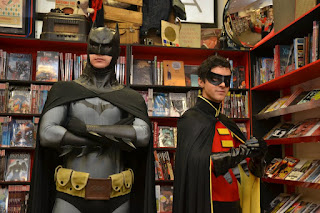 If you have any questions, you know where to ask them. You can start to buy the Legend from this Thursday the 5th of July.

Posted by All Star Comics Team at 9:33 AM