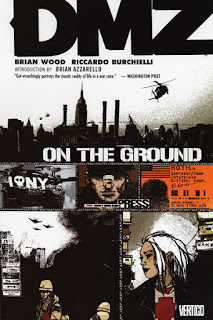 It's almost November which means it is again time to give everyone the chance to get a great book cheap and this month, we turn the spotlight on Brian Wood and Riccardo Burchielli's DMZ, a near future epic of the second American Civil War.

A key of dystopian fiction is to act as a mirror, when the reader views the text, it is their job to find the parallels with the world they live in. The post 9/11 world produced a number of intriguing stories as many writers began to examine the uncertainty and fear. Combined with the politics of the Bush era and the war in Iraq many stories were produced that examined the complexities of these issues often taking a well informed critical eye. DMZ is one of these stories that uses the fictional setting of a war torn New York as a means of reflecting on the politics of the time.

If this all sounds overwhelming, don't worry because one of the main strengths of Brian Wood's writing is his ability to create characters who are easy to relate to which helps to ground the story. Matty Roth, like the reader is an outsider and as he gives his amateur journalist insight into the New York City that is the DMZ, the reader is drawn into the world and the characters who inhabit it. Through this fantastic but grounded setting, Wood is then able to explore the war in its larger context as a nation wide conflict. 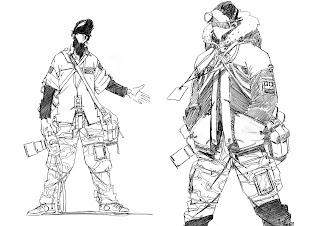 While not the only artist on the series, it is from the pencil of Riccardo Burchielli's that the visual aspect of DMZ will be most remembered. His expressive and animated character designs leave a strong impression with so many of the characters being as unique as the way they are written. Perhaps the key strength of his artwork though is the way he work with New York native Wood to produce a realistic depiction of a war torn city. It is through this collaboration that makes the whole thing feel authentic. 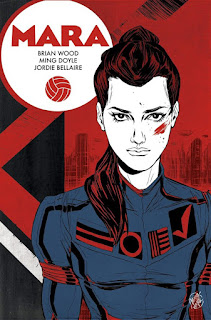 If you haven't already joined the Brian Wood bandwagon (where have you been for the last 10 years says I?) then now is the perfect opportunity with not only this great All Star deal on DMZ but this month also sees the release of Wood's work on Conan, Ultimate X-Men and X-men all in trade. Beyond that there is the last collection of his Northlanders series, the first collection of The Massive, plus his next creator owned series Mara (Image) and soon to be released Star Wars title. There honestly couldn't be a better time to become a Brian Wood fan, just like the rest of us.

If you end up liking DMZ, here are a few other Wood titles you might want to look up:
Local (Oni)
Demo Volumes 1 and 2 (Vertigo)
New York Four and Five (Vertigo)
Channel Zero (Dark Horse)
Northlanders (Vertigo)
The Massive (Dark Horse)

If you have any questions, you know where to ask them. You can start to buy the Legend from this Thursday the 1st of November.

All Star Legends. The legendary titles of the highest recommendation.
Posted by All Star Comics Team at 9:29 AM