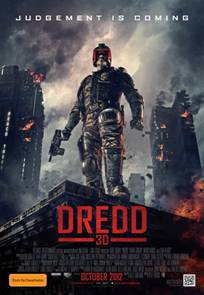 DREDD takes us to the wild streets of Mega City One, one of the industrial Quasi-civilisations dotting the landscape of the cursed earth, a wasteland spreading across North America.
Judge Dredd (Karl Urban) is the most feared of the elite Street Judges, with the power to enforce the law, sentence offenders and execute them on the spot - if necessary. The endlessly inventive mind of writer Alex Garland and the frenetic vision of director Pete Travis, bring DREDD to life as a futuristic neo-noir action film that returns the celebrated character to the dark, visceral incarnation from John Wagner and Carlos Ezquerra's revered comic strip.

Thanks to the Mega-cool people from Icon Film , we are super excited to have the chance to give away 5 double in-season passes to see Dredd.

To go into the draw to win one of the five double passes up for grabs, just tell us who you think would make a great Judge in a Mega City future.


Again a huge thanks to Icon Films and Dredd in cinemas October 25th
For more information head to: http://www.iconmovies.com.au/en/Movies/D/Dredd.aspx